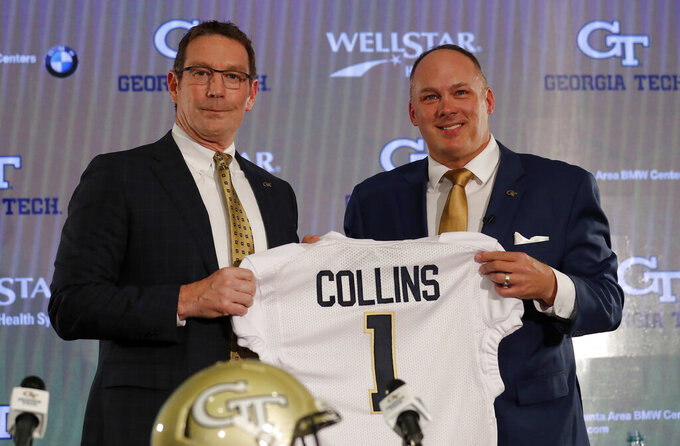 ATLANTA (AP) — Georgia Tech on Tuesday announced plans to move five home games — one each in five consecutive seasons, including dates against Notre Dame in 2020 and 2024 — to Mercedes-Benz Stadium.

The stadium, home to the NFL's Atlanta Falcons and MLS' Atlanta United, is less than one mile from the Georgia Tech campus.

The 2022 season opener against Clemson is part of the package of five games moving off campus. It will be the first time two teams from the same conference have played in the annual season kickoff game held in Atlanta.

The dates and opponents for Georgia Tech's 2021 and 2023 home games at the new stadium have not been announced. Athletic director Todd Stansbury said those games will be set when the Atlantic Coast Conference releases schedules for those seasons.

New Georgia Tech coach Geoff Collins said he is "beyond excited" to have home games scheduled for "one of the best venues in the world."

The stadium, which boasts a retractable roof, opened in 2017 and was the site of the Super Bowl earlier this month.

The changes do not affect Georgia Tech's 2019 schedule.

Stansbury says he originally explored options for the home game against Notre Dame on Nov. 14, 2020, before expanding the search to a five-year deal. He said playing home games in the bigger stadium helps him promote his school.

"One of the No. 1 messages I wanted to make about our brand is the fact we're in Atlanta," Stansbury said. "I don't think there's a better way to make a statement about our location."

Stansbury said he used "due diligence" in making the decision to move home games from Bobby Dodd Stadium on Georgia Tech's campus.

"We could protect our home schedule because Bobby Dodd will still have a great lineup," Stansbury said. "In most of these years we've already secured six home games in addition to this one."

Moving five games to the bigger stadium creates the potential for additional revenue. The new stadium seats about 72,000 for football, almost 20,000 more than Bobby Dodd Stadium.

The move opens more seats for fans from both schools. Georgia Tech is taking the risk of Notre Dame or Clemson fans buying those tickets and negating the Yellow Jackets' home-field advantage.

"I have full faith in the Yellow Jacket nation," Collins said. "... They'll come out and be loud and proud."

Georgia Tech did not consider moving one of its home games in its annual series against in-state rival Georgia.

"That is a historical game that I believe should be played at home-and-home sites," Stansbury said.

The 2020 Notre Dame game will not be Georgia Tech's first visit to the new stadium. Tennessee beat Georgia Tech 42-41 in two overtimes in the 2017 kickoff classic.