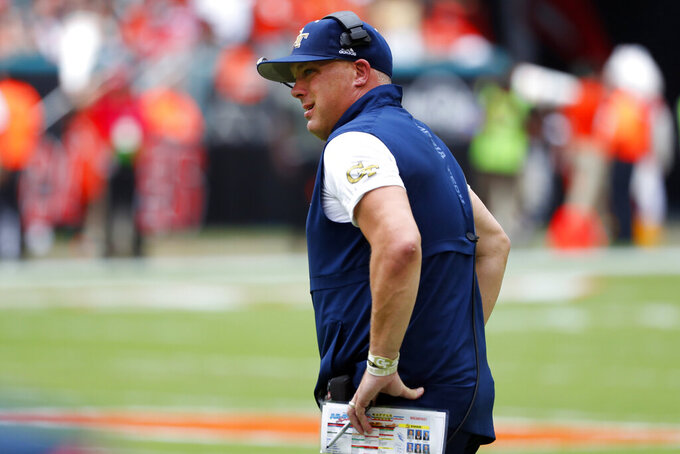 The Yellow Jackets, who play Pittsburgh on Saturday, now are even younger.

After losing three senior starters on offense to injuries in the first half of the season, only eight seniors remain on the active roster. Collins must rely even more heavily on first- and second-year players.

There's renewed reason for optimism, however, after redshirt freshman quarterback James Graham led the Yellow Jackets to a win over Miami two weeks ago.

It was a much-needed victory after four straight losses for Georgia Tech (2-5, 1-3 Atlantic Coast Conference). The difficult first season for Collins, the former Temple coach, is not a surprise. It was obvious the makeover to a pro-style offense after Georgia Tech's 11 years in triple-option attack would not be easy.

"It is a huge undertaking," Collins said Tuesday.

The enormity of the challenge became clear when the Yellow Jackets suffered a home loss to The Citadel last month.

There have been a combined seven freshmen and sophomores starting on offense the last three weeks. A breakout player to watch is sophomore running back Jordan Mason, who ran for 141 yards against Miami, including the game-winning touchdown in overtime.

Georgia Tech had an open week after the drought-breaking win. Ten days later, Collins couldn't be blamed for reviewing the win before talking about Pitt (5-3, 2-2).

"I've said it all along, we're getting better every single week," he said.

Pitt coach Pat Narduzzi has respect for Collins' difficult challenge. Asked on Monday if he has ever been part of such a dramatic makeover, Narduzzi said "No, not really. Thank God."

"That's a tough deal to walk into, I think, and Geoff will do as good a job as anybody in the country, and he already has," Narduzzi said.

"But they've found the right quarterback. I think that's a key."

Graham has started the last three games. He has a strong arm but is most comfortable handing the ball to Mason and other running backs. Graham also is dangerous as a runner on run-pass options.

"I think he had a lot of success handing it off, so I think he was like 'Heck, I'm just going to keep giving the ball to those guys. I don't need to throw the ball out there.'"

Collins and Patenaude know better balance will be necessary.

Georgia Tech is last in the ACC with its average of 145.7 yards passing per game.

"It's still a work in progress, just every single phase of it," Collins said when asked about Graham's progress.

Graham said he sees improvement in his performance in weekly film reviews.

"I see stuff and say 'Why did I do that?'" Graham said earlier this month. "Now I learn from it and go to practice with the mindset just to get better."