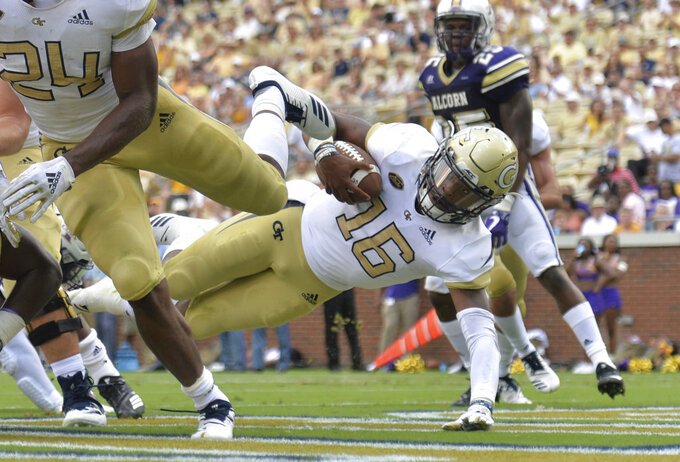 Georgia Tech quarterback TaQuon Marshall (16) dives into the end zone for a touchdown in the first half of an NCAA college football game against Alcorn State Saturday, Sept. 1, 2018, in Atlanta. (Hyosub Shin/Atlanta Journal-Constitution via AP)

ATLANTA (AP) — KirVonte Benson ran for two touchdowns and Georgia Tech rushed for 439 yard in a 41-0 win over Alcorn State in the season opener for both teams on Saturday.
It was Tech's first shutout in nearly five years.
The Yellow Jackets took control early, scoring on the fourth snap of the game when Jordan Mason went 28 yards. The redshirt freshman fullback led Tech with 85 yards as one of four players to surpass 70 yards.
Quarterback TaQuon Marshall rushed for 77 yards and a touchdown and completed 9-of-18 passes for 104 yards, a score and an interception. Benson had 75 yards on 10 carries and Tobias Oliver, the backup quarterback, had 72 yards on 12 carries in the first action for the redshirt freshman.
Tech punted just once, yet head coach Paul Johnson wasn't particularly impressed after his team dominated an FCS opponent.
The Jackets lost two fumbles (one by punter Pressley Harvin III), and stalled on downs when Oliver was stopped on fourth-and-goal from the 1-yard line in the fourth quarter.
Marshall completed just 4-of-12 passes in the first half, badly overthrowing open receivers at least three times.
"I think any time you can win a game and win it in pretty dominating fashion, that's a positive," Johnson said. "At the same time, I was disappointed in the way we played offensively, for sure. ... We've got to make a ton of progress from week one to week two as the competition will continue to ratchet up. For as many guys as we have returning on offense, that was a pretty sloppy performance."
Alcorn State quarterback Noah Johnson completed 10-of-15 passes, but never threatened Tech as he passed for just 51 yards.
The Yellow Jackets outgained the Braves 543-146 in the second meeting between the programs. Tech beat Alcorn State 69-6 to open the season in 2015.
"I thought out guys played fairly well," Alcorn head coach Fred McNair said. "Our guys stood up to the task. It could have been much worse, but I think we played hard enough to keep the game in perspective."
THE TAKEAWAY
Alcorn St.: The Braves have won four straight SWAC East division titles, but the FCS program was overmatched in looking for its first win over an opponent from a Power Five conference. Although nearly as big as Georgia Tech, Alcorn State couldn't match the host team's speed or skill in any facet of the game.
Georgia Tech: This game was all along going to be more than anything about how the new 3-4 scheme of first-year defensive coordinator Nate Woody looked, and the Yellow Jackets didn't disappoint. With a variety of blitzes, Tech limited Alcorn State's rushing and passing attacks on the way to the first shutout since a 56-0 win over Syracuse on Oct. 19, 2013. The Braves converted just 2-of-13 third-down chances.
PASSING GRADE
Marshall hit 5-of-6 passes for 79 passes in the second half, including a 24-yard touchdown pass to senior wide receiver Brad Stewart in the third quarter. Marshall, who ran for 1,146 yards in 11 games last season to set a school record for quarterbacks, scrambled around for several seconds before finding Stewart wide open in the end zone.
"I lost my confidence in the first half after missing a couple balls," Marshall said. "I got my confidence up in the second half."
UP NEXT:
Alcorn St.: The Braves will step down in competition to kick off their home schedule Sept. 8 with a non-conference game against Louisiana College, a Division III program.
Georgia Tech: The Yellow Jackets will step up and open ACC play Sept. 8 at Pitt, where Tech has split a pair of games since the Panthers joined the conference in 2013.
-----
https://apnews.com/tag/Collegefootball and https://twitter.com/AP_Top25