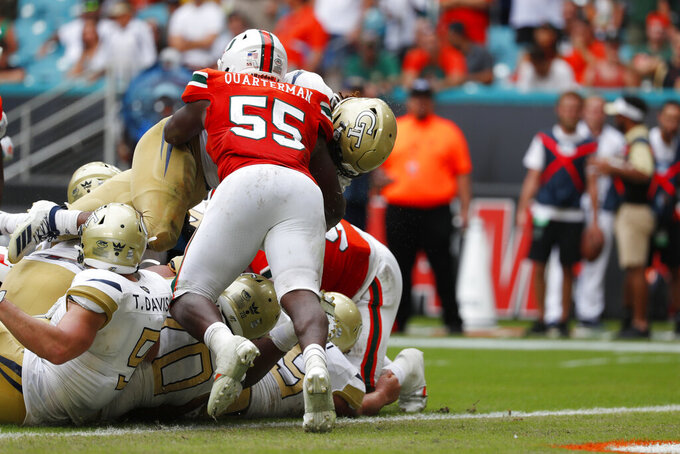 MIAMI GARDENS, Fla. (AP) — A fake punt for a touchdown. A fumble recovery in the end zone for another score. A blocked field goal in the final seconds of regulation to stay in the game.

Georgia Tech's rebuilding season got plenty of material for the highlight reel on Saturday.

And Miami's season took a turn in a very bad direction.

Antwan Owens blocked a Miami chip-shot field goal in the final seconds of regulation, Jordan Mason ran for 141 yards and scored on a 1-yard rush on the first possession of overtime and Georgia Tech knocked off the Hurricanes 28-21 on Saturday to snap a four-game slide.

"Unbelievable resolve from our guys," Georgia Tech coach Geoff Collins said. "The way they played and the way they attacked. The way they stayed in the moment. It was a complete offense, defense and special teams victory."

Georgia Tech (2-5, 1-3 ACC) also scored on a fumble recovery after a sack in the end zone by Ja'Quon Griffin in the first quarter, on a 41-yard pass by punter Pressley Harvin III on a fake in the second quarter and later a 35-yard strike from James Graham to Ahmearan Brown. The Yellow Jackets finished off the win by getting a fourth-down stop inside their 5, by maybe a couple of inches, to end Miami's lone overtime possession.

"By far the best play I've ever had in my life," Harvin said of his pinpoint pass to Nathan Cottrell for the fake-punt score.

Miami (3-4, 1-3) matched its worst seven-game start in 22 years. The Hurricanes missed three more field goals, all from relatively close range. Turner Davidson missed a 34-yarder in the second quarter, Bubba Baxa missed a 27-yarder late in the fourth and then Davidson's 25-yarder at the end was blocked by Owens.

The Hurricanes have now missed six field goals inside of 34 yards this season, plus two extra points.

"We will stay unified in our locker room," Miami coach Manny Diaz said. "We will stay together. We will go to Pittsburgh next week and we will compete the way the Miami Hurricanes compete."

All four of Miami's losses have been by seven points or fewer, and missed kicks have been a factor in all of them. Baxa had short misses in Miami's losses to Florida and North Carolina, and a missed PAT late against Virginia Tech kept Miami from taking a 36-35 lead late in what became a 42-35 loss.

"We're a brotherhood," said receiver KJ Osborn, who had a touchdown catch for the Hurricanes. "We're in this to the end."

Cam'Ron Harris rushed for 136 yards and N'Kosi Perry threw touchdown passes to Harris and Osborn for Miami, which needs to win three of its final five games just to become bowl-eligible.

Miami lost top running back DeeJay Dallas in the first quarter to what appeared to be a right knee injury, watched Perry get shaken up — but return — in the third quarter and had linebacker Michael Pinckney depart in the second half as well.

Dallas is Miami's leading rusher, and Pinckney is the Hurricanes' third-leading tackler.

Georgia Tech nearly took the lead with 10 minutes left, when Jamious Griffin busted through multiple tackles and got to the end zone. But replay show the edge of his right foot — barely — touched the sideline during the run, and the Yellow Jackets fumbled the ball away three plays later.

But Miami couldn't take advantage, and the Yellow Jackets got the block at the end of regulation, then needed only three Mason carries — 2 yards, 22 yards and then the 1-yarder — to take the lead in OT. Perry's fourth-down pass to Brevin Jordan was inches shy of a first down on the game's final play, and Georgia Tech sprinted onto the field in celebration.

Georgia Tech: The Yellow Jackets hadn't scored more than 24 points in a game this season, and entered the game as one of four of the 130 FBS teams not to cross that threshold. They've now beaten Miami in back-to-back seasons.

Miami: WR Jeff Thomas was suspended for the game for violating team rules, the latest downturn in his Miami career. Thomas was dismissed from the team last season, announced he was transferring to Illinois and then returned to the Hurricanes. Thomas has 24 catches for 270 yards and two touchdowns this season, plus another 192 yards on 11 kick and punt returns.

By John Zenor 51 minutes ago
By Pete Iacobelli an hour ago
2 hrs ago
By Ralph D. Russo 5 hrs ago
By Ken Powtak 18 hrs ago