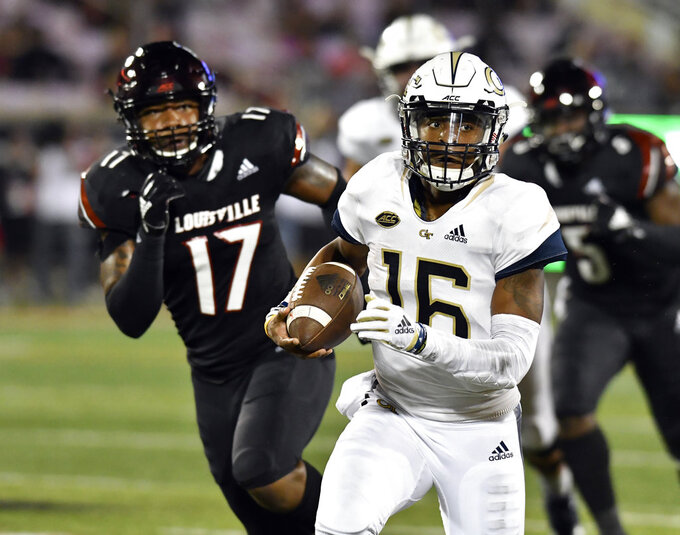 FILE - In this Friday, Oct. 5, 2018 file photo, Georgia Tech quarterback TaQuon Marshall (16) runs from the pursuit of Louisville linebacker Dorian Etheridge (17) during the first half of an NCAA college football game in Louisville, Ky. Georgia Tech have won four straight, including last week’s 30-27 overtime victory over Virginia. But the streak that is the hot topic this week is Georgia Tech’s two straight wins in Athens _ a 30-24 overtime win in 2014 and a 28-27 thriller in 2016.(AP Photo/Timothy D. Easley, File)

ATLANTA (AP) — Following an ugly loss to Clemson on Sept. 22, Georgia Tech was 1-3 with three straight losses and appeared bound for a second straight losing season.

"The sky was falling after that game," coach Paul Johnson recalled on Tuesday.

Since the 49-21 loss to No. 2 Clemson , the Yellow Jackets (7-4) have enjoyed a dramatic turnaround, winning six of seven. They will take a four-game winning streak into Saturday's game at No. 5 Georgia.

Running back Clinton Lynch said the winning streak has the Yellow Jackets "playing with pretty good confidence" at a good time.

"You always need that confidence to go up to Athens and get the W," Lynch said.

If Georgia Tech could pull off its third straight win in Athens, a season already revived would become special.

"I just think guys are always pumped to play up there," said running back Qua Searcy, who had the game-winning touchdown run with 30 second remaining in the Yellow Jackets' 28-27 win at Georgia in 2016. "It's a great atmosphere. There's no better feeling than winning in Athens, which we've experienced twice. I just feel like the guys are always excited to win in Athens."

Johnson said there was panic outside the program because the loss to Clemson revealed the Yellow Jackets could not compete with the Atlantic Coast Conference's top team .

"Hello? Everybody they play has," Johnson said. "I noticed this week, for what it's worth, South Carolina is a 26-point underdog going to Clemson. ... They're probably one of the two best teams in the country."

Georgia Tech finished 5-3 in the ACC, behind only Pittsburgh in the Coastal Division. After the Clemson game, Georgia Tech's only other loss was against Duke.

"I think toward the last half of the year these kids have done a really good job of just trying to focus on what they can control," Johnson said.

As always, ball security is crucial in Johnson's spread-option offense. Marshall has been accurate with his option pitches and has made good decisions on when to keep the ball.

"He's taken care of the ball," Johnson said, rapping his knuckles on the table in front of him for good luck.

Marshall is the only quarterback in Georgia Tech history to run for at least 100 yards in 10 career games. He leads the Yellow Jackets with 857 yards rushing and is second with 11 touchdown runs.

Georgia shut down Marshall and the option attack last season, holding the Yellow Jackets to 188 yards rushing in a 38-7 win. Marshall noted this year's Bulldogs defense lost some of its top players, including first-round draft pick Roquan Smith, to the NFL.