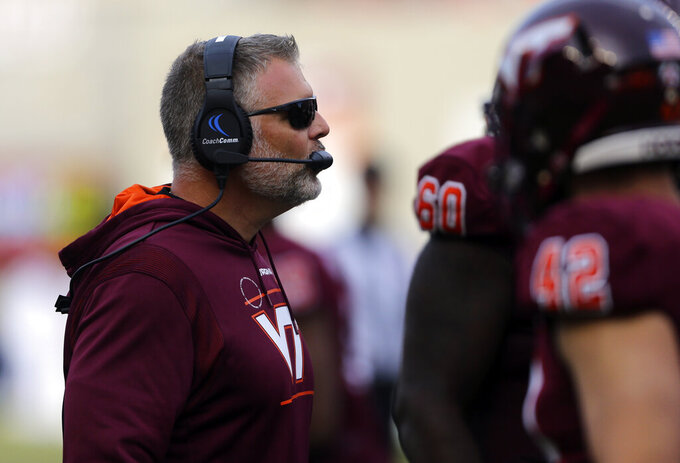 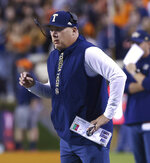 ATLANTA (AP) — Georgia Tech is in danger of missing a bowl game for the third straight year under coach Geoff Collins.

Virginia Tech coach Justin Fuente is in danger of losing his job — at least if some Hokies' fans had their way.

The Yellow Jackets (3-4, 2-3 Atlantic Coast Conference) are coming off an eight-point loss at Virginia that wasn’t as close as the score might indicate. Georgia Tech trailed 48-27 before recovering a couple of onside kicks and scoring touchdowns that narrowed the gap at the end.

Virginia Tech (3-4, 1-2) has dropped three straight after losing at home to Syracuse. The Hokies have also lost four out of their last five, through three of the defeats were by six points or fewer. They led Syracuse by nine points with less than three minutes to play but ultimately couldn’t overcome allowing 550 yards of total offense, 314 of which came on the ground.

Chants of “Fire Fuente” rose throughout Lane Stadium for a sixth-year coach who is 22-22, including 15-14 in the ACC, since Fuente’s first two teams went a combined 19-8.

The Hokies have had trouble closing out games, losing twice after their opponent scored in the closing seconds. Notre Dame kicked a field goal with 17 seconds remaining and Syracuse threw a 45-yard touchdown pass with 19 seconds to go. They also failed to convert on fourth-and-goal from the 3 at the end of a 27-21 loss at West Virginia.

“I think it speaks volumes about our kids’ resiliency and their belief in what we’re trying to get accomplished,” Fuente said. “And they keep coming back and battling their tails off.”

Georgia Tech went 3-9 in first season under Collins and went 3-7 in last year’s pandemic-shortened season. The Jackets are 9-20, 7-15 in the ACC since he was hired.

Georgia Tech allowed Virginia to gain 636 yards of offense, including 240 on the ground after the Cavaliers entered the game averaging 120.3 yards rushing. The Jackets are finding it hard to create turnovers as well. They had none against Virginia and have just one in the past three, this after getting eight takeaways in the first four games.

With winnable games against Virginia Tech, Miami and Boston College in its next three, Georgia Tech needs to beat each of them to have a realistic chance at making a bowl game. The Jackets close out the season at No. 11 Notre Dame and then host No. 1 Georgia.

“The biggest thing we talked about is just creating margin in the program,” Collins said. “When we first got here, there was a big margin, and now that margin is really small.”

Some other things to look for in Saturday’s game:

Georgia Tech quarterback Jeff Sims is coming off a three-touchdown, 300-yard performance and leads an attack that set a season high with 570 yards of total offense. That was the Jackets’ most yards under Collins.

Offensive coordinator Dave Patenaude said Sims, a second-year freshman, is more comfortable in the scheme, understands defenses better and knows where to go with the ball.

“Now there’s a deeper understanding of not only what to do but why to do it,” Patenaude said. “It’s no coincidence that he’s throwing for 300 yards because he knows where to go with the ball, he’s making on-target throws, and I thought he showed a lot of patience in a bunch of those situations when he got the ball to the checkdowns. We talk about it all the time. He’s still a young guy. He’s still technically a freshman. He has a very bright future.”

The Hokies face a similar challenge as Syracuse presented in defending Jackets running back in Jahmyr Gibbs and a dual-threat quarterback in Sims. That presented a big problem Virginia Tech last week as Orange QB Garrett Shrader ran 22 times for 174 yards and tailback Sean Tucker ran 20 times for 123 yards. Shrader was also 16 of 34 passing for 236 yards and two touchdowns.

“We have to shut down the run game and make them one dimensional and defend the pass,” Hokies linebacker Dax Hollifield said.

Despite the loss to Syracuse, the Hokies found a feature back in freshman Malachi Thomas, who carried 21 times for 151 yards and three touchdowns, including a 47-yarder. He’s averaging 6.2 yards on 32 carries and figures to get significant playing time going forward.

Georgia Tech has three linebackers that rank among the top 10 in ACC tackles. Quez Jackson leads the conference with 9.6 tackles per game. Linebacker Ayinde Eley ranks seventh and linebacker Charlie Thomas is in a tie for 10th.

The schools didn’t play last year because COVID-19 led to a reconfigured ACC schedule. Virginia Tech leads the series 10-7, including a 6-3 advantage in games at Bobby Dodd Stadium.