Georgia vs Arkansas State: A game with stark dose of reality 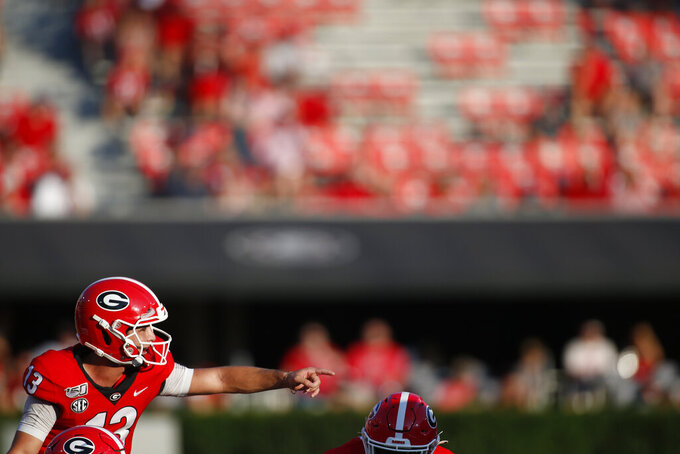 Georgia quarterback Stetson Bennett (13) calls out before running a play in the second half of an NCAA football game between Georgia and Murray State in Athens, Ga., on Saturday, Sept. 7, 2019. Georgia won 63-17. (Joshua L. Jones/Athens Banner-Herald via AP)

ATHENS, Ga. (AP) — Blake Anderson doesn't want it to be about him.

Yet it's impossible to ignore his pain.

When No. 3 Georgia hosts Anderson's Arkansas State team on Saturday, the game will come with a stark dose of real life.

"I can't even begin to fathom or understand what he's gone through," Georgia coach Kirby Smart said. "When I first heard the news, I was crushed for him, his family, his kids. I can never imagine what he's having to go through because that's really tough. Obviously, he loves family because he made the choice to step away and was able to go be with them. And now, he's come back."

Anderson took a leave of absence shortly before his wife's death.

He missed the season-opening loss to SMU— didn't even watch it on TV, in fact — but made a last-minute decision to rejoin the Red Wolves before last Saturday's game at UNLV,

Surprising his players when he walked into the hotel just hours before kickoff, Anderson's return clearly inspired his Sun Belt Conference squad. The Red Wolves (1-1) romped to a 43-17 victory, their largest margin over a FBS non-conference opponent since 2011.

"I had mixed emotions," Anderson said. "I didn't really make the decision to go until early, early in the morning. I didn't want to be a distraction to the guys."

The Red Wolves responded to his return with a stellar performance.

"I wanted to be uplifting," Anderson said. "We've been apart for a while. I struggled with whether or not to go. At the end of the day, I decided if there was an ounce of energy I could bring to the table, now is the time to go. My kids were pushing me out the door and saying, 'Dad, you need to go.' I'm glad I did. It was an unbelievable night."

There's no doubt that he'll be on the sideline for Saturday's game at newly christened Dooley Field at Sanford Stadium.

Georgia has encouraged its fans to wear pink in honor of Anderson's late wife.

"Beyond grateful," Anderson tweeted when he learned of Georgia's plans. "Thank you."

Here are some other things to watch for when Georgia hosts Arkansas State:

Georgia is again living up to his reputation as Running Back U.

Showing all kinds of depth, the Bulldogs are averaging 296 yards rushing per game through the first two weeks.

D'Andre Swift gained 147 yards on just 16 carries in the season-opening victory over Vanderbilt. The junior didn't play much in last week's 63-17 blowout of Murray State, giving redshirt freshman Zamir White and true freshman Kenny McIntosh a chance to shine against an FCS opponent.

White gained 72 yards on eight carries and scored his first college TD. McIntosh chipped in with nine carries for 61 yards.

The last two years, Georgia didn't have any concerns about the depth behind quarterback Jake Fromm.

That became an issue, though, when Jacob Eason transferred to Washington and Justin Fields left for Ohio State.

Stetson Bennett alleviated some of those concerns with his first appearance last week. He completed 9 of 13 passes for 124 yards and two touchdowns, though he also had an interception that was returned for a score by Murray State.

"He did some good things, but he did some things that he doesn't typically do in practice," Smart said. "He's willing to work on it and he's committed to that. I love the way Stetson competes in practice and the way he's growing as a player."

Arkansas State will be looking to create some havoc in the Georgia backfield.

The Red Wolves have seven sacks and 15 tackles behind the line in their first two games.

Georgia freshman George Pickens has already drawn comparisons to another receiving great for the Bulldogs.

"He reminds me of A.J. Green," defensive end David Marshall said. " He's long, fast, quick and knows how to catch the ball."

The 6-foot-3, 190-pound Pickens had four catches for 78 yards against Murray State, including his first TD and a diving, tumbling grab that went for 43 yards.

Arkansas State receiver Omar Bayless is coming off a career-best 149 yards receiving in the victory over UNLV.

Bayless may have been more inspired than anyone by Anderson's return.

"He loved Wendy," the coach said. "I know he was chocked up about the way the night went."