Georgia vs Florida an elimination game for SEC East, playoff 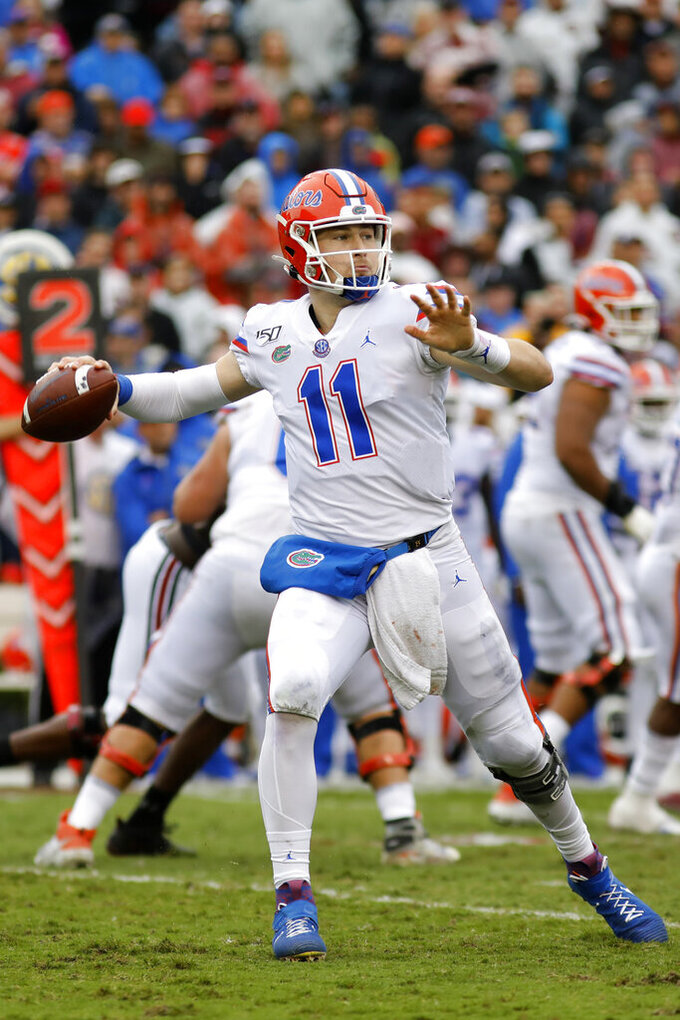 JACKSONVILLE, Fla. (AP) — The "Cocktail Party" has become an elimination game — and not just in the Southeastern Conference's Eastern Division.

No. 9 Georgia and No. 6 Florida will play for the second straight year with higher stakes than usual. The loser almost certainly will be knocked out of contention for the College Football Playoff, essentially turning the neutral-site game into a pseudo quarterfinal matchup for the national title.

"We're playing for pretty much everything we want in our season in one game, so we approach it just like that," Georgia running back D'Andre Swift. "Everybody knows what's ahead of us, so we have to approach it that way."

The Bulldogs (6-1, 3-1 SEC) lost in double-overtime at home to South Carolina last month, leaving them little margin for error the rest of the way. They are trying to become the first East team in more than 20 years to reach the conference title game in Atlanta in three consecutive years and trying to return to the CFP for the second straight season.

The Gators (7-1, 4-1) lost at then-No. 5 LSU last month and likely have to beat Georgia for the first time in three years to get back to Atlanta for the third time this decade. The winner of the "World's Largest Outdoor Cocktail Party" has advanced to the league's showcase event nine times in the last 13 years.

"We know what's at stake," Florida linebacker Jon Greenard said. "We've got the bad taste out of our mouth from last year, and this game changes everything. If we win, we've just got to do our job from that point on. If we lose, it just makes it that much harder and the chances the place we want to go that window gets very slim."

Both teams have looked suspect at times this season.

Jake Fromm threw three interceptions and Rodrigo Blankenship missed a game-tying field goal in the second overtime in the loss to the Gamecocks. A week later, Georgia failed to find the end zone in the first half against Kentucky — a rain-soaked field had a lot to do with the offensive woes — before scoring 21 unanswered points after the break.

The Gators won three times this season after trailing in the fourth quarter, rallying to beat Miami, Kentucky and South Carolina — all away from home.

Florida's young offensive line remains a work in progress, but the team is counting on the return of three starters making a difference against Georgia and beyond.

Greenard and defensive end Jabari Zuniga are returning after missing several games with high ankle sprains. Greenard, the team's best defensive player , played one series against LSU and missed the team's last game against South Carolina. Zuniga, the team's most experienced defensive lineman, was hurt at Kentucky in mid-September and sat out four of the last five games.

And elusive receiver Kadarius Toney is back after missing six games with a left shoulder injury.

"He brings a whole different aspect," fellow Florida receiver Josh Hammond said. "He's a different receiver than the rest of us because of the things he can do with the ball in his hands. It will be interesting to see what other tricks and packages that coach (Dan) Mullen will put in for him."

Here are some other things to know going into the rivalry game that's being played in Jacksonville for the 83rd time in the last 86 years:

"I know him real well," Swift said. "I just told him good luck and keep doing his thing. He's a great player."

Florida will test Georgia's secondary — and for good reason. The Gators feel like passing plays to their strength. It also appears to be the better option against Georgia, which is the only team in the country — at any level in college football — that hasn't allowed a rushing touchdown this season.

The Bulldogs lead the SEC and rank fifth nationally in rushing defense, allowing a measly 85.7 yards a game. Even more staggering, they haven't allowed a rusher to score on them.

Georgia coach Kirby Smart would like the conference to allow teams to be able to host recruits at neutral-site games. The inability to do so is the main reason Smart suggested the Bulldogs would benefit from moving the game in Jacksonville to campuses.

But Getting the league to alter the rule is considered a long shot.

"What do you think those other teams are going to do with that?" Smart asked. "I'm petitioning right now. If you're Alabama and you're Tennessee, are you going to help Florida and Georgia out? I don't think they're going to go for that."