Georgia's first 3 games have the feel of an NFL preseason 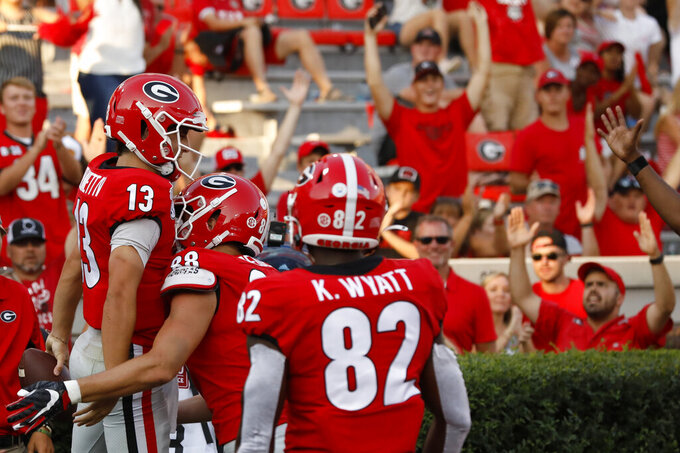 Georgia quarterback Stetson Bennett (13) celebrates with teammates after scoring a touchdown against Murray State during the second half of an NCAA college football game Saturday, Sept. 7, 2019, in Athens, Ga. (Joshua L. Jones/Athens Banner-Herald via AP)

ATHENS, Ga. (AP) — For the No. 3 Georgia Bulldogs, the first three weeks of the season appear to have all the significance of an NFL preseason.

Another game Saturday against a big underdog.

To those on the outside, it looks like nothing more than a precursor to the start of the real season on Sept. 21, when No. 7 Notre Dame plays between the hedges for the first time.

But Georgia coach Kirby Smart scoffed at any suggestion that his team is peeking ahead a bit to the Fighting Irish as it prepares to host 32-point underdog Arkansas State.

Georgia opened the season with a 30-6 blowout of fellow Southeastern Conference school Vanderbilt and followed up with a 63-17 shellacking of FCS school Murray State this past weekend, a game that little more than a glorified scrimmage.

The oddsmakers are predicting another easy victory against the Red Wolves (1-1), who are members of the Sun Belt Conference.

Smart, of course, doesn't want his players taking anything for granted.

So he did his best to make Arkansas State sound like something of a cross between Clemson and Alabama.

"This is a really, really good football team," the coach said. "They do a tremendous job offensively and defensively, and you could see that last night right when we flipped the page to look at them. They've got some really good defensive players — explosive, quick. They lead their conference in a lot of categories. I have a lot of respect for their quarterback. They've got the best wideouts and skill guys we have probably faced when it comes to a combination of three or four really good receivers. They have a lot of experience up front, a lot of returning guys."

But Smart left something out.

While Arkansas State has certainly built a successful Group of Five program, winning five conference titles and earning eight straight bowl bids over the past decade, they have lost 20 straight games against current members of the Power Five — most by big margins.

But coaches are good at coachspeak, so Smart went to work building up the Red Wolves.

"We don't look past today," he said. "I think when these guys turn on the tape like we did last night, we don't ever lie to our players, we say 'this is what it is and here it is for you to see, you be the judge.' We did that last week and we're going to do it this week. The tape speaks for itself this week. This is a really good football team."

His players were reticent to even mention the name of that school from South Bend.

"Just worry about the team we're playing now," defensive end David Marshall said. There aren't "too many other people who talk about, uhh, other teams like that on campus."

Someone pointed out that Marshall had done a good job of staying away those two dirty words — Notre Dame.

Much like an NFL exhibition, the last game did serve at least one useful purpose for the Bulldogs: a bunch of young players got a chance to gain valuable playing experience.

Redshirt freshman Zamir White led the team with 72 yards on eight carries and scored his first college touchdown. Freshman Kenny McIntosh rushed for 61 yards on nine carries. Freshman George Pickens set the receiving pace with four catches for 78 yards, including his first TD as well as a spectacular 43-yard reception. Backup quarterback Stetson Bennett got into a Division I game for the first time, completing 9 of 13 for 124 yards and two scores, though the Racers did return an interception to the end zone.

All those guys could be line for significant playing time again Saturday if the Bulldogs build another big lead.

After that, it's time to get serious.

That's when the season begins in earnest.