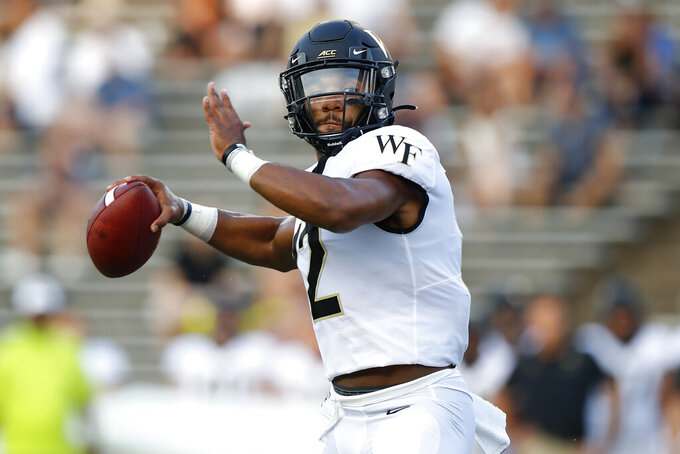 FILE - In this Sept. 6, 2019, file photo, then-Wake Forest quarterback Jamie Newman (12) looks to pass during an NCAA football game in Houston. Two transfers, Jamie Newman, from Wake Forest, and JT Daniels, from Southern Cal, are names to watch in Georgia’s five-player quarterback competition. Newman may be the favorite as practice started Monday because Daniels is still recovering from a knee injury at USC. (AP Photo/Matt Patterson, File)

Georgia's long-awaited return to practice is the opening to a five-way quarterback competition that could be impacted by JT Daniels' continued rehabilitation from a knee injury.

Junior cornerback Eric Stokes and other players were eager to see the contenders, including transfers Jamie Newman and Daniels, in Monday's opening day of preseason practice.

“It’s really hard to say, I’m in the same boat as everybody else,” Stokes said Sunday when asked about the competition. "... I really don’t know yet so it will be a shock to all of us.”

Coach Kirby Smart said Daniels, the former Southern Cal starter, is still recovering from a season-ending knee injury suffered in the 2019 opener. Daniels has three years of eligibility at Georgia.

Smart said Daniels will wear a brace on the knee and has not been cleared for full practice.

Newman could be the favorite. With spring practice wiped out by the coronavirus pandemic, the edge could rest with the returning quarterbacks, Stetson Bennett and D'Wan Mathis. Freshman Carson Beck enrolled in January.

Smart said it will be crucial to pick the right quarterback to lead new coordinator and quarterbacks coach Todd Monken's offense.

“That’s going to be the key to us,” Smart said. "Who is the quarterback, who is able to lead the team, and what gives us the best chance to get the ball to the playmakers out in space.”

The “out in space” comment could be a signal changes are coming with Monken, the NFL Cleveland Browns' offensive coordinator in 2019. There may be a greater emphasis on passes to such top receivers as George Pickens and Demetris Robertson.

Georgia ranked only fifth in the Southeastern Conference in scoring in 2019 and missed the College Football Playoff.

Newman transferred from Wake Forest for his final year of eligibility. He passed for 2,868 yards and ran for 574 yards with a combined 32 touchdowns in 2019, his first full season as the starter.

Daniels was granted his immediate eligibility at Georgia. He started for USC as a freshman in 2018 and passed for 2,672 yards with 14 touchdowns and 10 interceptions.

Before Monday, coaches had to rely on virtual Zoom video meetings for some of their contact with the quarterbacks. And even with the uncertainty about the upcoming season, everyone was eager to talk about football.

““We’re excited about all five of those guys, to be honest with you,” Smart said. “Those guys have done a good job in their Zoom meetings, paying attention.”

Newman was limited by a mid-foot sprain in the summer walk-through drills but has been cleared for the preseason drills. Smart said Newman “was mentally there and able to do a lot of things with the team” even while forced to miss about half of the summer sessions.

Georgia held informal workouts before spring practice was canceled by the pandemic — and before Daniels joined the team. Even though Smart and his staff didn't know spring drills would be wiped out, they still placed an emphasis on the informal workouts due to the quarterback competition.

There was much anticipation to see the new quarterbacks in Monday's first real practice.

“JT is a very talented guy," said senior safety Richard LeCounte. “I haven’t really seen him sling it like that, only a little bit. I’m ready for him, just like everyone else to go out there and show what they got. This camp is to prove who you are, what kind of player you are.”

NOTES: WR Dominick Blaylock will be kept out of contact drills at the start of practice. Smart said Blaylock is “not completely cleared” after suffering a torn anterior cruciate ligament in the SEC championship game loss to Louisiana State. Smart said CB D.J. Daniel (ankle) is “almost back" after missing most of the summer camp. ... Smart said no player has discussed opting out due to the pandemic.