Get this: Georgia Tech has a shot at a winning streak 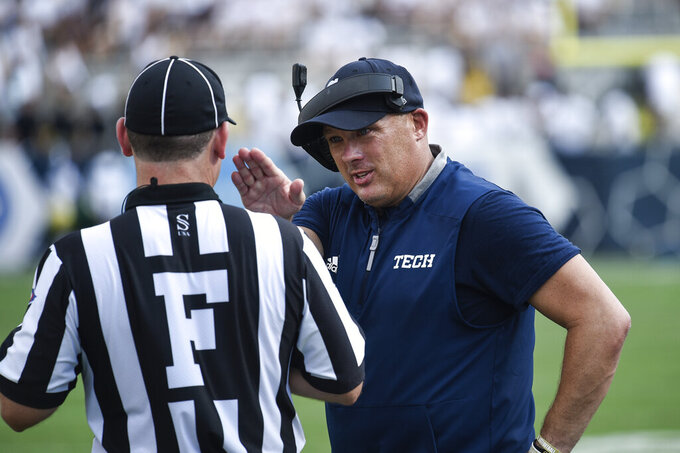 ATLANTA (AP) — Georgia Tech has a shot at a winning streak.

Given how this season is likely to go, the Yellow Jackets need to take advantage of the opportunity.

"Every single day, our guys come to work with a great attitude," Collins said. "I think the creativity and just staying at it with guys that have great attitudes and great work habits and playing together is really cool."

The Yellow Jackets are looking to build on an ugly 14-10 victory over South Florida.

"I was proud of the way the guys played situational football," he said. "We played really clean football — we only had two penalties in the game — so I'm just proud of how they stayed in the moment and played at a high level."

After hosting The Citadel (0-2), Georgia Tech could be an underdog in each of its remaining games. Collins is facing a massive rebuilding job as he makes the transition to a pro-style offense with personnel more suited to run the triple-option under previous coach Paul Johnson.

"This is a monumental transition unlike any that has happened in a long time in college football," Collins said.

The Citadel has dropped a pair of seven-point games to fellow FCS schools Towson and Elon.

The Bulldogs have a couple of more games to sort things out before beginning their Southern Conference schedule.

"We're a good football team and this is going to pay off for us in the end," coach Brent Thompson told reporters after a 35-28 setback to Elon. "We needed to have a little bit of adversity, and these tight losses will pay off for us."

Some other things to watch for when Georgia Tech hosts the Citadel:

Georgia Tech took some baby steps in the passing game in Week 2.

The Yellow Jackets completed 14 passes against South Florida, their most in a game since 2014.

"I know it's not ridiculous stat, but ... we were really efficient throwing the ball," offensive coordinator Dave Patenaude said. "Now, we need to be more explosive throwing it down the field a little bit more."

Unfortunately for the Yellow Jackets, the offense hasn't been able to turn any of those turnovers into points.

If the offenses struggle, this game could come down to field position.

Both teams are in good shape at punter.

Citadel sophomore Matt Campbell is averaging 48 yards on eight punts, dropping half of his kicks inside the 20-yard line.

Georgia Tech counters with Pressley Harvin, who has already punted 14 times and is averaging 42.4 yards.

Jordan Mason is the only running back to put up significant yards for the Yellow Jackets.

Collins praised Mason for more than his running ability, pointing to a key block that sprang Oliver for a touchdown against South Florida..

"Those kinds of things matter too, other than him just being a great running back," the coach said.

The Yellow Jackets will be going against an offense that brings back memories of the way they used to do things.

The Citadel rarely passes out of its option scheme, completing 7 of 12 for 93 yards through the first two games. The Bulldogs have thrown a pair of TD passes, but they also have two interceptions.

Collins said it won't be a major adjustment from any other week going against more traditional offenses.

"Even though not everybody runs the option, you still have to be option-sound every single week," he said. "We're a culture built on effort. There's got to be an overlap in the defense, play assignment football, and that's every single week. But it's more focused when you're playing somebody that runs the triple and runs it as well as they do."