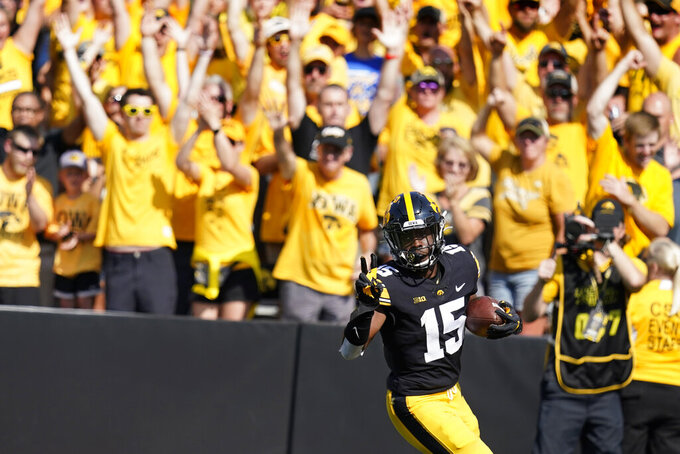 Iowa running back Tyler Goodson (15) celebrates as he scores on a 46-yard touchdown run during the first half of an NCAA college football game against Kent State, Saturday, Sept. 18, 2021, in Iowa City, Iowa. (AP Photo/Charlie Neibergall)

IOWA CITY, Iowa (AP) — Tyler Goodson saw nothing in front of him but the end zone — and that was before he got the ball.

“Pre-snap, I saw it,” the Iowa running back said, smiling.

The play that turned into a 46-yard touchdown run early in the first quarter of No. 5 Iowa's 30-7 victory over Kent State on Saturday, was set up perfectly, Goodson said, with the Golden Flashes heading away from him. All he had to do was get the pitch from quarterback Spencer Petras.

“Which I almost dropped, by the way,” Goodson said, still smiling.

Goodson caught the pitch, then ran for the touchdown, the first of his three rushing scores.

The Hawkeyes (3-0) have won nine straight games. They have won 14 consecutive nonconference games, the second-longest current streak in the nation.

Iowa’s first two wins of the season, against ranked teams Indiana and Iowa State, were built on its defense, which forced seven turnovers in the two games.

It was important to get a balanced offense, and the Hawkeyes did in this game — 206 rushing yards and 212 passing yards.

“We still have a lot of things to work on,” Ferentz said. “The execution is still not there. But yeah, there were some good things going on, kind of subtly. It was good to get Tyler going a little bit better.”

“We liked that play going into the game, but I didn’t know that was going to be a touchdown,” Petras said. “That was a heck of a job by Tyler to use his speed to get to the end zone.”

Goodson added a 35-yard scoring run in the third quarter, then had a 2-yard touchdown run in the fourth quarter to close the scoring.

Goodson became the first Hawkeye to rush for three touchdowns in a game since Akrum Wadley did it in 2017. It was Goodson’s sixth 100-yard rushing game of his career.

“The guys up front did a good job getting to their assignments,” Goodson said. “It made sure the running backs had just a split second to get to the open field and we did that, from there it was on the running backs to get it to the house.”

The Hawkeyes’ defense, which had forced seven turnovers in the first two games, got a first-quarter safety when Kent State quarterback Dustin Crum was sacked in the end zone after a bad snap. Crum was 16-of-23 passing for 185 yards and was sacked seven times.

The Hawkeyes forced a turnover in the third quarter, when Kent State had first-and-goal at the 1. Running back Bryan Bradford had the ball knocked away by Jestin Jacobs, and cornerback Riley Moss recovered the ball in the end zone for a touchback. Goodson’s second touchdown came on the ensuing possession.

“(Bradford) tried to bounce out,” Moss said. “The ball bounced out and I got it. I wanted to run it out, but I tripped a little bit.”

Kent State (1-2) came into the game averaging 360 rushing yards, second-best in the nation, but was held to just 79 yards.

Iowa has held opponents to 24 points or under in 25 consecutive games, the longest current streak among Power 5 schools.

It was Iowa's 300th win at Kinnick Stadium. The first game played at the stadium was October 5, 1929, a 46-0 Iowa win against Monmouth. Iowa is the seventh Big Ten school to win 300 or more games in its home stadium.

Iowa had a 20-play, 95-yard touchdown drive at the end of the first half that took 8 minutes, 38 seconds. Petras threw a 5-yard touchdown pass to tight end Sam LaPorta with 19 seconds remaining in the half. Iowa converted four third downs on the drive. “It just shows us this offense can be strong in any situation,” Goodson said.

The Hawkeyes finally showed they could move the ball on offense, although Petras still struggled with some throws. He finished 25-of-36 passing for 209 yards. Kent State stayed with Iowa until the third-quarter fumble that changed the momentum.

The Hawkeyes, at their highest spot in the rankings since November 29, 2015, should stay there this week.

Kent State: At Maryland next Saturday.