As Gophers aim for title game, Badgers seek to take back Axe 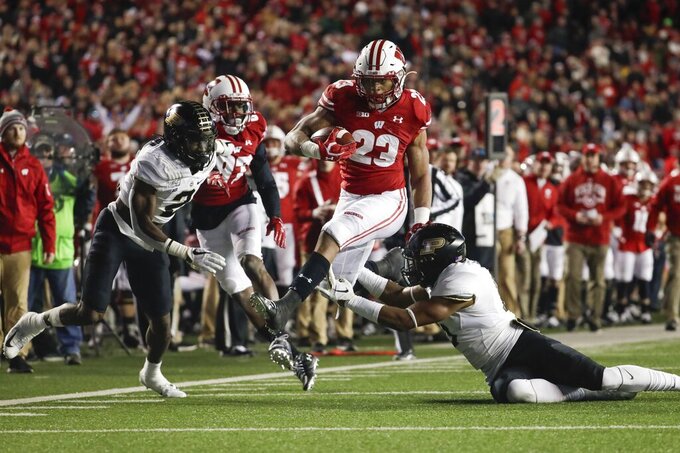 MINNEAPOLIS (AP) — The empty display case in the locker room at Wisconsin has created a daily source of purpose this year for the players passing by — the unwelcome memory of watching Minnesota hoist Paul Bunyan’s Axe on their home field.

The time has come for the Badgers to try to take back the traveling trophy they’ve won in 21 of the last 24 seasons. For the Gophers and their long-frustrated fans, after a year’s worth of Axe selfies around the state, there are grander visions in mind. The reward for beating their oldest rival on Saturday afternoon? The Big Ten West Division title and a program-first appearance in the conference title game.

“It’s something you dream about as a kid. You’re in the backyard thinking, ‘All right, this is fourth-and-10 to go to the Big Ten championship,’ or whatever it is,” Gophers quarterback Tanner Morgan said. “You want to play in big-time games. I think all competitors do.”

Because they kept their record perfect until just two weeks ago, they’re still in the race for the College Football Playoff, too. Failing that, an invitation to one the New Year’s Six bowl games is well within reach, including the Rose Bowl that Minnesota has not been to in 58 years.

For once, the final game on the schedule for the ninth-ranked Gophers (10-1, 7-1, No. 8 CFP) has meaning beyond border-state bragging rights.

The Gophers have not been undefeated at home in any season since 1954. The 13th-ranked Badgers (9-2, 6-2, No. 12 CFP) will be aiming to keep it that way, motivated by the 37-15 defeat in 2018 was their first against the Gophers since 2003 in the most-played series in major college football history.

“Being that one team that let it slip away, now you have to do everything in your power to get it back and restart a streak,” running back Jonathan Taylor said.

The progress that started with the win at Wisconsin last year and continued through Fleck’s third season would not have been possible without this class. These seniors stuck with the program after the disruption three years ago of a brief player boycott, stemming from the university’s handling of a sexual assault investigation, the firing of coach Tracy Claeys, and the arrival of Fleck with the sharp changes his style and approach brought to the building.

Taylor, the second-leading rusher in the FBS, has topped the 200-yard mark in each of Wisconsin’s last three games. Though he was limited to 120 yards by Minnesota last year, Taylor and the Badgers blockers will present perhaps the greatest challenge for the Gophers defense to date in 2019.

“We’re going to try and establish the line of scrimmage,” Taylor said. “Most of the teams want to spread it out and get downfield quickly. We do a lot of things.”

GOPHERS ON THE GROUND

Morgan leads the Big Ten in passing yards and has already set Minnesota’s single-season record with 26 touchdowns, but the Gophers are still a ground-oriented team. With wintry weather forecast for Saturday, the running game ought to be just as critical for them as for the Badgers. Minnesota ranks fourth in the conference in rushing yards, behind an offensive line averaging 340 pounds per player.

“It’s always hard to have a big dude right in front of you,” Badgers linebacker Chris Orr said, “and then a hard-running back right behind. You’ve got to muscle up, put some air in your chest, get under people’s chins, and make it happen. This is going to a fun football game.”

Minnesota had a player with 1,000 receiving yards only five prior times in program history, and Johnson (1,025) and Rashod Bateman (1,023) have both joined the club this year. Johnson got there last season, too, with an all-time Gophers record 1,169 receiving yards that could easily be broken by both of them in 2019.

“They’re big-play machines,” Orr said. “They can take a dig and take it to the house, or they can catch a fade over people. They are a really talented group, probably the most talented that we’ve seen up to this point.”

Campus bookstores have surely seen a run on cardboard and markers this week for clever signs to hold in background shots, with ESPN’s College GameDay crew set for a first trip to Minnesota. Among the 65 major programs, the Gophers were one of the 10 teams yet to be picked to host the hype show that started traveling to sites of big games in 1993.