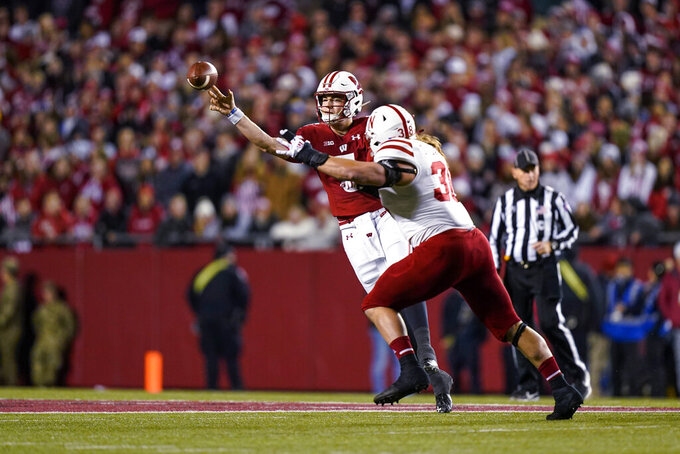 MINNEAPOLIS (AP) — Tanner Morgan got the game ball for Minnesota last week, a tribute to his 25th career victory that gave him the record for Gophers quarterbacks.

“I’ve been around a lot of good teammates and a lot of good coaches. It was really special, and I’m forever thankful for that moment and thankful to be a part of this program and this culture,” said Morgan, who is 25-12 as the starter since taking over midway through his freshman season in 2018.

Getting one more win Saturday might be his greatest accomplishment on the field yet.

Wisconsin will be in town with Paul Bunyan's Axe, that hallowed trophy that Morgan and many of his teammates touched and treasured three years ago but has since been returned to its more familiar habitat with the Badgers.

The Gophers will be up against one of the most dominant defenses in the nation, a group that has allowed an average of just 10 points over Wisconsin's seven-game winning streak. The 18th-ranked Badgers (8-3, 6-2, No. 14 CFP) would win the Big Ten West Division by beating Minnesota and reach the conference championship game for a seventh time in 11 seasons.

“You don’t want to lose the Axe. That’s like the No. 1 thing. No other game matters but this one,” Wisconsin cornerback Faion Hicks said. “This is what you work all year for, for this game.”

“The Axe, it’s the trophy we have our eyes on every single year. It’s definitely special to us," Wisconsin nose tackle Keeanu Benton said. "You go to any of the functions that we have as a team, any of the events, it’s always the Axe that’s there.”

The Gophers (7-4, 5-3) spoke this week in less demonstrative terms about the trophy. Perhaps that's because their possession of it was so fleeting, still unrealized for any players in their first, second or third years. It's also part of their hyper focus on process and togetherness under coach P.J. Fleck, as much as they long to win those trophy games themselves.

Morgan's journey has epitomized the pillars of the program under Fleck, who initially recruited him to Western Michigan and brought him to Minnesota once he was hired in 2017.

After a stellar 2019 season, when the Gophers finished 11-2, Morgan has not been nearly as productive as a passer. His coaches and teammates, however, look much deeper than that with the Kentucky native, whose father died of cancer this summer.

“He goes through it every single day and he will for the rest of his life, but just to watch his resolve and his courage to keep going, that’s what life is about,” Fleck said. “If you just keep going, somehow some way, it’s not promised and it’s not guaranteed, but you’re going to come out on the other end better.”

Morgan has not said whether this will be his last season. He has the option to return next year. This could well be his final home game on Saturday, though, against the rival Badgers.

“There’s tons of people out there who are extremely dedicated to their craft, but to a certain point you’ve got to be able to bring people along with you on that commitment and that’s something that Tanner is able to do really well,” left guard Conner Olson said. “That extends beyond just the offense. That’s across the board.”

Wisconsin quarterback Graham Mertz grew up with a firm understanding of the rivalry. His father, Ron Mertz, was an offensive lineman for Minnesota from 1989-92. These days, though, the Mertz family only goes to the games wearing red.

Braelon Allen has rushed for over 100 yards in each of the Badgers’ last seven games. The 17-year-old freshman has 401 yards and six touchdowns in two games since Chez Mellusi suffered a season-ending knee injury.

Syracuse’s Sean Tucker is the only other player among the major five conferences with more 100-yard rushing performances this season. Allen’s average of 7.59 yards per rush is the highest of any FBS player with at least 100 carries.

The Gophers have lost their four top running backs from the start of the season, three to injuries and one to the transfer portal, but freshmen Ky Thomas and Mar'Keise Irving have helped keep the rushing attack on track.

“You can just tell they’re well-coached in how they want to run their specific scheme. The running backs do a great job at hitting the hole, finding the hole,” Wisconsin linebacker Jack Sanborn said. "Sometimes it’s not going to be a giant hole, but there’s going to be a hole there, and the backs are smart enough and good enough that they’re going to find it, and it’s going to kill you.”

Wisconsin fell from the FBS lead in total defense after giving up a season-high 452 yards in a 35-28 victory over Nebraska last week. The Badgers are allowing 237.7 yards per game, just behind No. 1 Georgia. Linebacker Leo Chenal has 14 tackles for loss in the last six games.

“It’s maybe one of the best defenses we’ve played in our time here of any opponent,” Fleck said.