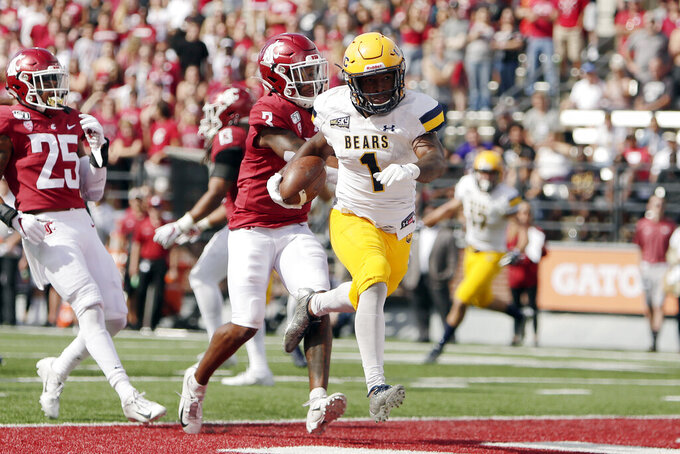 Northern Colorado running back Milo Hall (1) runs for a touchdown in front of Washington State defensive back Daniel Isom (3) during the first half of an NCAA college football game in Pullman, Wash., Saturday, Sept. 7, 2019. (AP Photo/Young Kwak)

Jacob Knipp completed 8 of 15 passes for 128 yards for Northern Colorado (0-2) of the Big Sky Conference.

Gordon, who came under little pressure from the opposing defense, completed 31 of 39 passes with one interception.

Winston caught a 7-yard touchdown pass from Gordon on the Cougars' first possession for a 7-0 lead.

Hall ran up the middle on the ensuing possession for an 11-yard touchdown to tie it.

Gordon replied with a 4-yard touchdown pass to Borghi for a 14-7 lead.

The Bears drove into Washington State territory, but running back Jullen Ison fumbled and the Cougars' Ron Stone recovered at the 29. Gordon's 39-yard pass to Brandon Arconado set up Borghi's 2-yard touchdown run for a 21-7 lead.

Collin Root kicked a 50-yard field goal to cut the deficit to 21-10 late in the first half.

Winston caught a 7-yard touchdown pass on the opening drive of the second half as Washington State took a 31-10 lead.

Borghi ran over the goal line from the 3 midway through the third quarter for a 38-10 Washington State lead.

Washington State linebacker Ron Stone was ejected from the game for targeting Knipp in the third.

Gordon is the current Pac-12 Offensive Player of the Week after leading the Cougars to a 58-7 win over New Mexico State in his starting debut.

Northern Colorado: The Bears were predicted to finish last in the Big Sky this season.

Washington State: The Cougars have pounded two overmatched opponents and need to face tougher competition to get a better picture of their abilities.

Two impressive wins, plus No. 21 Syracuse losing big to Maryland, could produce a higher ranking for the Cougars.

Washington State: At Houston on Friday.