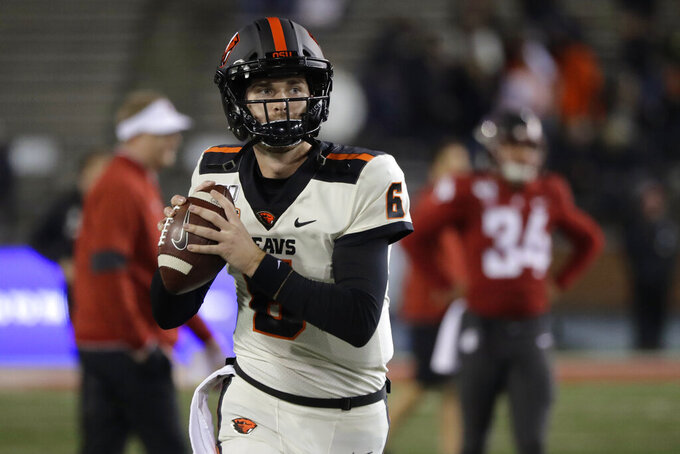 “It was a really wild game. I was proud of our guys for being tough enough to stick in there. We created a bunch of adversity for ourselves in the fourth quarter and then clawed our way out of it,” said Washington State coach Mike Leach. “The biggest thing in games like this is to have the resiliency to fight through them. You don’t know how it is going to unfold. The only way you are going to have a chance is if you fight through it and you are willing to do it from start to finish.”

Gordon went 50 of 70 for 606 yards, six touchdowns and three interceptions. He broke the Pac-12 single season passing touchdown record formerly held by Jake Browning and Jared Goff when he hit Renard Bell in the end zone with 1:44 left in the third quarter. Gordon has 45 passing touchdowns for the season.

“It’s pretty awesome,” Gordon said. “I really haven’t had the time to reflect on it. The individual awards aren’t really all that important to me to be honest though. It just goes to show if you keep your head down and work hard anything is possible. I’m just real proud of the way our team battled. The defense did an unbelievable job of getting that stop on fourth down and giving us a chance and I’m so happy the way we pulled through on that last drive.”

Oregon State (5-6, 4-4) recovered an onside kick on their 49, down three with 7:30 left in the fourth quarter and converted it into a touchdown on the ensuing drive. The Beavers were up 53-42 with 4:17 left in the game before Washington State closed out the game with two consecutive touchdowns.

“It was a heck of a football game. It was back-and-forth and credit Washington State for continuing to answer,” said Oregon State coach Jonathan Smith. “We got ourselves down by 11, responded with a couple of quick scores to take the lead and it goes back-and-forth. Our guys played their hearts out, they really did, but we were just one play short.”

Jake Luton was 22 for 40 for 408 yards passing, five touchdowns and one interception for Oregon State.

Jermar Jefferson rushed for 132 yards and two touchdowns. He had two receiving touchdowns as well.

Champ Flemmings had 110 yards receiving and a touchdown.

Oregon State: The Beavers remain one victory away from becoming bowl eligible for the first time since 2013. They will have to beat in-state rival No. 6 Oregon in Eugene.

The Cougars honored their deceased teammate Tyler Hilinksi before kickoff. This would have been the QB’s final home game. Hilinksi took his own life in January 2018 at the age of 21.

Washington State: The Cougars travel to Seattle to play Washington in the Apple Cup next Friday.

Oregon State: The Beavers travel to Eugene to play No. 6 Oregon in the Civil War next Saturday.