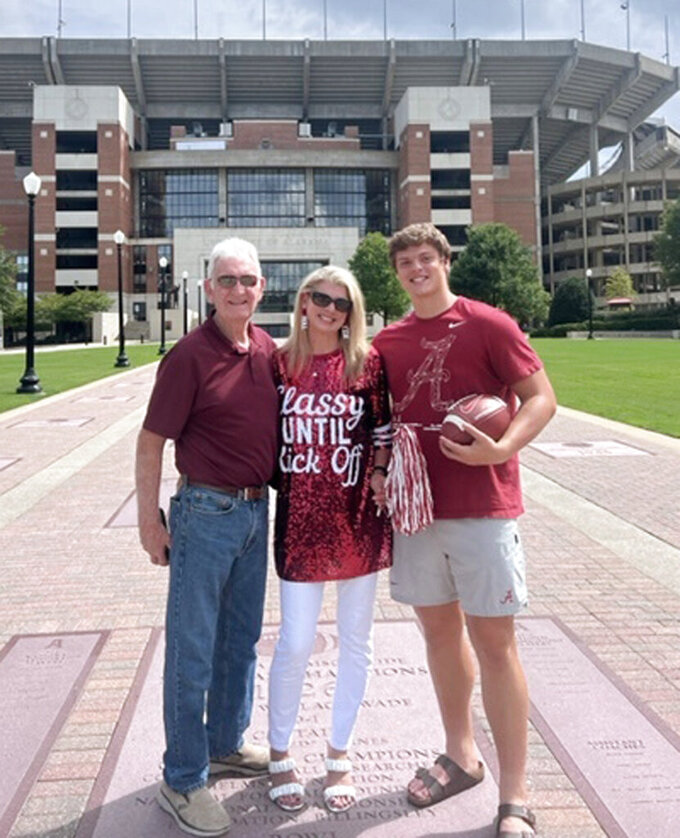 Former Alabama split end Dennis Homan, left, poses with his daughter Missy Homan, center, and grandson Kneeland Hibbett, a current Alabama long snapper, outside Bryant-Denny Stadium at the University of Alabama in Tuscaloosa, Ala. Hibbett has pledged to donate a share of his name, image and likeness proceeds to the Concussion Legacy Foundation, which has worked with ex-football players and others who developed traumatic brain injuries from repeated hits to the head. (Homan family photograph via AP) 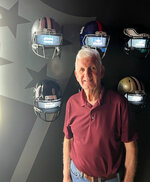 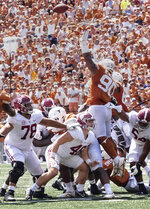 As a walk-on long snapper — even one at powerhouse Alabama — Kneeland Hibbett doesn’t figure to rake in a lucrative endorsement deal.

What he does earn he wants to put to good use.

The grandson of a Crimson Tide national champion, Hibbett has pledged to donate a share of his name, image and likeness proceeds to the Concussion Legacy Foundation, which works with former football players and others who developed traumatic brain injuries from repeated hits to the head.

Hibbett’s grandfather may be one of them. A receiver on Bear Bryant’s top-ranked 1965 team who went on to play in the NFL, Dennis Homan can still remember how unbeaten Alabama was deprived of another title by the poll voters in '66 but not, frequently, what he had for lunch.

“Kneeland wanted to do something to honor his granddad,” Missy Homan, Hibbett’s mother and Dennis Homan’s daughter, said in a recent interview. “Being on such a big stage, where the nation is watching ... What an incredible stage to bring awareness to a disease that affects our family.”

New rules that allow college athletes to accept money for endorsements are a boon for the biggest stars like Alabama quarterback and reigning Heisman Trophy winner Bryce Young, who has reportedly earned well over $1 million in deals with Dollar Shave Club, Fanatics and a local BMW dealer.

But the ability to monetize one’s name, image and likeness can also put cash in the pockets of players who aren't stars. Nebraska receiver Decoldest Crawford parlayed his distinctive first name into a deal with an Omaha air conditioning company; Missouri offensive lineman Drake Heismeyer saw an opportunity in his uniform number: 69.

“The best practice for student athletes is to find a way to stand out,” said Blake Lawrence, the CEO of Opendorse, which helps college athletes navigate the NIL marketplace.

For Hibbett, that also means taking advantage of his connection to one of the top teams in the country — the Crimson Tide — and to his grandfather, still enough of a celebrity in Alabama that he gets recognized on the streets whenever he goes out.

Hibbett is not the first college athlete to tie his NIL earnings to a cause.

But Hibbett’s cause is also personal.

Dennis Homan was a teammate of Ken Stabler and Ray Perkins, playing for Bryant on the Alabama team that won it all in 1965. (The ’66 team went 11-0 and finished third in The Associated Press rankings.)

About 20 years ago, Homan's family began noticing his memory was slipping and suspected he may be suffering from chronic traumatic encephalopathy, a degenerative brain disease that afflicts athletes, members of the military and others who sustain repeated head trauma. It can only be diagnosed posthumously.

Missy Homan said her father has so far escaped some of the more severe symptoms of CTE, which can cause violent mood swings and depression that leads to suicide. He has stopped driving, and his family has learned not to ask him questions he won’t be able to answer.

“He’s aware that he can’t remember a lot, which is sad. But he finds humor in it, you know, saying ‘I think I may have gotten hit one too many times during my days,’” his daughter said. “But his short-term memory is basically gone.”

Stabler, an NFL MVP who led the Oakland Raiders to the 1977 Super Bowl title, was diagnosed with CTE after he died in 2015. Perkins’ brain also showed signs of the disease.

Homan, now 76, has pledged his brain to the UNITE Brain Bank at Boston University.

“Once Kenny Stabler pledged his brain, he wanted to do the same thing. And, you know, Coach Perkins and several of the other players in his era did the same thing,” Missy Homan said. “It’s like my mom said, ‘They’re still teammates for life.'"

In a brief Zoom interview from Tuscaloosa, where he was watching Hibbett play in a Crimson Tide preseason scrimmage last month, Dennis Homan gushed over his grandson — not just for following him to Alabama, but for using his position to do some good.

“I tell you what, there’s a lot more of that going on than people know about,” Homan said. “But they’re doing something about it.”

Hibbett would not elaborate on any deals he has or might do, except to say he would donate a “a good amount” of his earnings to the CLF. He said most of what he has been offered has been to post things on social media; his TikTok account, which is a mixture of lighthearted videos and ones of him playing guitar and singing, has 262,000 followers and more than 14 million likes.

As an unknown long-snapper, Lawrence said, Hibbett’s earning potential is probably in the thousands. “And if the fanbase in Tuscaloosa gets behind him, that could turn into tens of thousands of dollars pretty quick,” he said.

But it’s not just about the money.

Chris Nowinski, a founder of the Concussion Legacy Foundation who played football at Harvard, said the chance to spread the word about traumatic brain injury within the sport is even more important.

“If football players mobilize to fight CTE now, we could cure CTE within their lifetime," he said. “But too many of them are on the sideline, either ignorant of the risk or praying they will be one of the lucky ones who won’t develop CTE.”