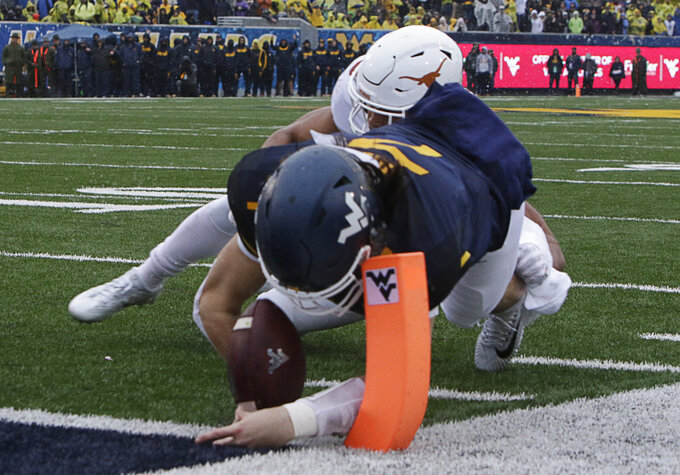 FILE - In this Saturday, Nov. 18, 2017 file photo, Texas defensive back Brandon Jones (19) tackles West Virginia quarterback Will Grier (7) short of the goal line during the first half of an NCAA college football game in Morgantown, W.Va. Grier injured his hand in during the play and left the game. Grier says he won't use a season-ending injury he suffered last season against Texas as additional motivation when No. 12 West Virginia plays the 15th-ranked Longhorns on Saturday, Nov. 3, 2018 in Austin, Texas. (AP Photo/Raymond Thompson, File)

A mangled finger. A season ended. Will Grier sees a matchup with No. 15 Texas not as a chance for redemption against a team he was injured against a year ago, but rather the next opportunity for No. 12 West Virginia as it tries to reach the Big 12 championship game.

Grier broke the middle finger on his throwing hand when he dove for the end-zone pylon in the Mountaineers' 28-14 loss to the Longhorns in Morgantown.

Gone was the chance for a 10-win season and perhaps eclipsing several single-season records for Grier. He missed the rest of that game and the next two, including a bowl, and West Virginia lost all three to finish 7-6. His 34 TD passes still were second best in school history and his 3,490 passing yards were fourth best.

There's no need to look back to the injury for additional motivation.

"No, not at all. I haven't really revisited that at all," he said. "It's just a freak thing that happened and hasn't changed my mindset at all moving forward. This is a really good team we're going up against. We look forward to having an opportunity to play this great game in a great environment against a great team."

Grier had driven West Virginia to the Texas goal line in the first quarter last year. From the 1 he faked a handoff to Justin Crawford, kept the ball and headed to his left. He stuck the football out toward the pylon but lost the ball. His throwing hand hit the turf with defender Brandon Jones on his back. His finger bent, Grier got up and jogged toward the bench, his season over.

After undergoing surgery, Grier announced a month later he would return for his senior season rather than enter the NFL draft.

Grier has drastically scaled back taking off with the football this season, although he still has the green light to run. His throwing ability continues to impress.

Grier is completing 70 percent of his passes and is averaging 325 yards per game, second in the league to Texas Tech freshman Alan Bowman. His 25 TD passes are second in the Big 12 to Oklahoma's Kyler Murray.

"It's certainly been fun to watch him this season," Texas coach Tom Herman said. "When you are playing him, the week that you're playing him, he's a handful."

Grier had some problems getting the Mountaineers into the end zone early in the Big 12 schedule and he's been sacked 19 times, more than all of last season. After a 30-14 loss at Iowa State, Grier bounced back with three touchdown passes and he ran for a 1-yard TD in a 58-14 win over Baylor last week.

If Grier has fallen off some prognosticators' lists of Heisman Trophy hopefuls, Herman has him back on it.

"He's one of the best players in the country," Herman said. "He is super talented. You can see why."