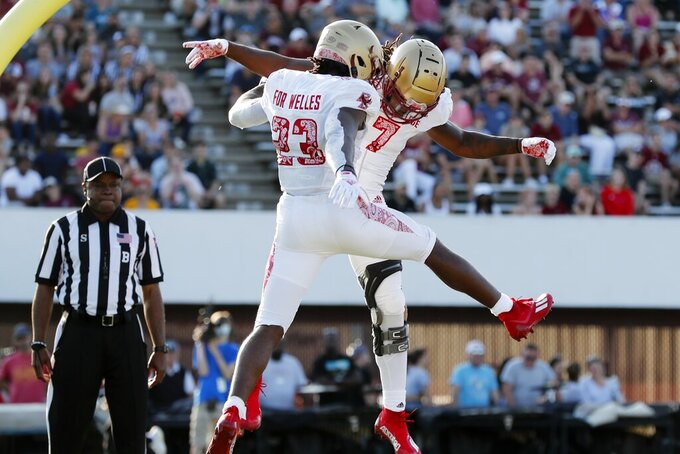 AMHERST, Mass. (AP) — Dennis Grosel replaced injured starter Phil Jurkovec in the first half and passed for 199 yards, ran for a touchdown and passed for another and Boston College beat UMass 45-28 on Saturday.

Grosel completed 11 of 14 passes after taking over for Jurkovec, who was taken to the locker room late in the first quarter with an undisclosed injury. Although BC officials said he was “questionable” at halftime he didn't return.

Coach Jeff Hafley said after the game that Jurkovec's injury involved the wrist and hand of his throwing arm, but wasn't sure how bad it was.

”They took him for X-rays but I don’t have a clue,” Hafley said.

Jurkovec completed 3 of 4 passes for 22 yards. A redshirt junior who transferred from Notre Dame before last season, he was the ACC co-quarterback of the week after throwing for 303 yards and three touchdowns in a little more than three quarters in a 51-0 victory over FCS Colgate in the season opener.

“I thought those guys played hard. As long as we do that around here, we’re going to have a chance," UMass coach Walt Bell said.

Olson also threw a pair of interceptions as BC took advantage of three turnovers by UMass; none bigger than Eric Collins' costly fumble on a punt return late in the third quarter.

Collins got as far as his own 41 before getting hit hard by Vinny DePalma, causing the ball to pop out and right to Woodbey, who took it all the way to the end zone.

“I think the football gods are rewarding us. I think that just goes to show how close of a unit we are. I think that we’re very connected. There’s no hating in the room,” Woodbey said. “Everybody wants everybody to get better and I think that’s something that’s rare across the nation.”

The Eagles didn't do much fancy offensively with Grosel at the helm once Jurkovec left. Boston College threw just 18 times and kept the offense conservative. Alex Sinkfield carried 13 times for 45 yards and scored on a 6-yard run to put the Eagles up 7-0 in the first quarter.

Garwo had a career-best day, shattering his previous high of 36 yards against Pitt last year on 14 carries. He covered more ground that that on one carry alone Saturday, going through the middle for 42 yards on Boston College's first play of the second half.

Olson, a freshman from Bellingham, Mass., made his college debut and rallied the Minutemen a few times after BC took a 14-0 lead. UMass countered with 28 of its points in the second half and kept BC from pulling away entirely.

Olson connected with Rico Arnold on a 56-yard touchdown with 13:21 left in the third quarter, and kept the Minutemen within 14-7 after forcing a turnover on BC's opening drive on the half. He also threw a 15-yard touchdown pass to Eric Collins and one from 14-yards out to Eli Merriweather with 9:04 left in the fourth.

Bell said Olson also showed some poise after the turnovers.

“Brady has unbelievable self-confidence," Bell said. “He's not a mistake repeater. He handles failure unbelievably well for a kid that's so attentive. He's got great moxie, a great demeanor. He's going to be a good quarterback for a long time here.”

Boston College has won 22 of the 27 meetings with UMass, which hosted the game for the first time since 1982.

Boston College: The outlook is going to depend somewhat on the medical report Sunday.

The Eagles were in control throughout the game despite the injury to Jurkovec, and could still be fine next weekend against Temple, but the competition picks up from there with a visit from Missouri followed by a trip to Clemson.

Defensively, the Eagles let the Minutemen back in a game they led 34-14 after Woobey’s touchdown with 3:04 left in the third quarter. It took Levy’s 96-yard kickoff return after UMass had pulled within 38-28 to seal it.

UMass: For a team that scored just 12 points in four games last year in a pandemic-shortened season and was shut out in the opener by Pittsburgh 51-0, there were a lot of positives Saturday. The Minutemen rallied after falling behind by three touchdowns and made it close, at least for a little while.