Growing pains frustrate No. 10 Ohio St as Akron visits next 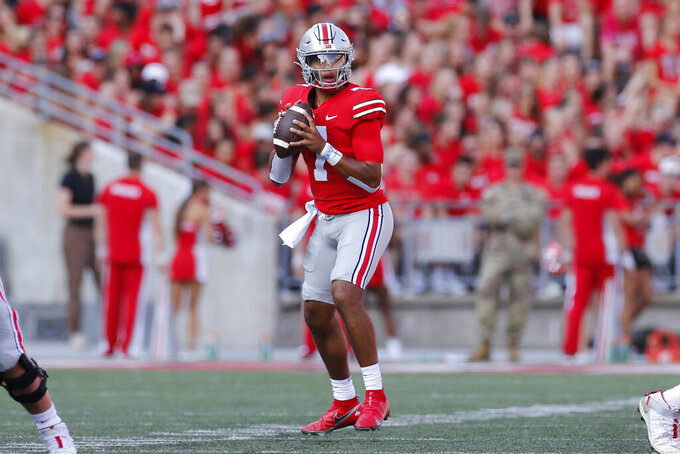 Ohio State quarterback C.J. Stroud looks to throw a pass against Tulsa during the first half of an NCAA college football game Saturday, Sept. 18, 2021, in Columbus, Ohio. (AP Photo/Jay LaPrete) 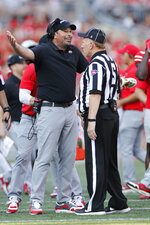 COLUMBUS, Ohio (AP) — No. 10 Ohio State isn't exactly in freefall but a program accustomed to reloading with game-ready stars is experiencing some growing pains.

The discombobulated Buckeyes (2-1, 1-0 Big Ten) dropped to their lowest poll ranking in nearly three years this week and the 76,540 people who watched them struggle with and eventually overcome Tulsa last week made up the smallest crowd for a game at 102,000-seat Ohio Stadium in half a century.

Ohio State has another tune-up game this week against Akron (1-2), a Mid-American Conference team that comes in as a seven-touchdown underdog. The Buckeyes, who played 18 freshmen last week, can surely use the extra work — and wide margin for error — before resuming the conference schedule at Rutgers on Oct. 2.

A game against such an inferior opponent also works in quarterback C.J. Stroud's favor.

Coach Ryan Day said Thursday that Stroud, who has a sore shoulder, likely will be rested against Akron. That means either Jack Miller III or Kyle McCord, or both, will see their first action of the season. He said Stroud likely will play only in an “emergency situation.”

“We decided it would be smart to shut him down for a couple days,” Day said.

As for Akron, the Zips might still be a ways off from being a contender in the MAC. Third-year coach Tom Arth is 2-19 running the show, including 1-5 in the pandemic-shortened 2020 season. The Zips have finished above .500 just twice in the past decade.

Akron gave up 105 points in each of its first two games, losses to Auburn and Temple, before taking down FCS squad Bryant 35-14 last week.

“They’re going to deliver some blows,” Arth said of the Buckeyes. “Are we going to be able to stand in there and take the punches and come back swinging?"

Freshmen TreVeyon Henderson dropped some jaws with his performance last week. His 277 rushing yards broke two-time Heisman Trophy winner Archie Griffin’s 49-year-old single-game rushing record for an Ohio State freshman. Henderson broke free for third-quarter touchdown romps of 48 and 52 yards. It might have been a different game without him. Fellow freshman back Miyan Williams has shown promise, too, rushing for 125 yards and a TD in the Week 1 win over Minnesota.

Fifth-year senior Kato Nelson started the first two games at quarterback for Akron, but it’s been DJ Irons who's made the biggest impact there. The dual-threat junior, who played at Eastern Kentucky after a year at community college, spelled Nelson in the first two games, then threw for 296 yards on 19-of-23 passing and three touchdowns last week.

“I thought there were some moments when DJ just took over,” Arth said.

Day was so alarmed by the defensive issues after the upset by Oregon that against Tulsa he gave sideline play-calling duties to secondary coach Matt Barnes and sent defensive coordinator Kerry Coombs up to the press box. The Golden Hurricane still piled up 501 yards, but Day said the coaching shift will stand for now. Coombs was a popular defensive assistant under Urban Meyer who was lured back from the NFL by Day in 2020.

A bright spot for the Buckeyes has been the play of some of the first-year guys who have been forced into action by necessity. Safety Cam Martinez broke up three passes and returned an interception for a touchdown last week and cornerback Denzel Burke has been a ball hawk. Luke Wypler is a starter at center and Tyleik Williams and Jack Sawyer are establishing themselves on the defensive line.