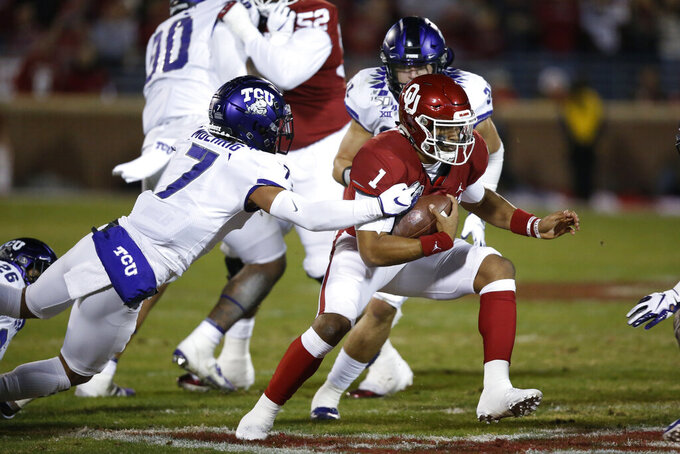 NORMAN, Okla. (AP) — Oklahoma coach Lincoln Riley is such a maestro that he can run a completely different offense than what you actually see.

Gundy pointed out that Oklahoma quarterback Jalen Hurts has carried the ball more this season than Oklahoma wishbone greats Steve Davis, Thomas Lott, J.C. Watts, Jamelle Holieway or Charles Thompson ever did in a season.

Sure, Riley runs things out of a spread, but much of Oklahoma’s success this season has come from Hurts putting pressure on opposing defenses with his running ability — just like the ground-based wishbone offense the Sooners used to flatten opponents with under coaches Chuck Fairbanks and Barry Switzer in the 1970s and 1980s.

Hurts has rushed for 1,156 yards this season, the second-most in a single season for an Oklahoma quarterback behind Jack Mildren.

The beauty in it for Riley is that he’s had three very different quarterbacks in his three years as head coach and has gotten similar production. Oklahoma led the nation in yards per play and total offense with Heisman winner Baker Mayfield at quarterback in 2017, then the Sooners set the NCAA record for yards per play last season and led the nation in total offense with Heisman winner Kyler Murray calling the signals.

This season, with a revamped offensive line, the Sooners once again lead the nation in yards per play and are just a shade behind the record they set last year.

No matter the personnel, Riley finds a way.

Hurts is bludgeoning opponents with a mix of designed runs and scrambles. He has at least 22 carries in each of his past three games.

“I always felt like it was going to be a good weapon for us and would be pretty tough to stop,” Riley said. “You can never sit there at the beginning of the year and perfectly lay it out, and we’ve still got a long ways to go here too. But I like how it’s evolved. I think it’s made our run game a little more versatile.”

It’s quite a shift in emphasis for Riley, who first came to Oklahoma known for the pass-heavy Air Raid offenses he ran at East Carolina. Hurts has 180 carries this season; Mildren, Oklahoma’s single-season recordholder for a quarterback, had 223 in 1971. And Hurts isn’t running out of bounds like Murray often did last year — he’s bringing the contact to defenders and keeping the chains moving with his powerful, 218-pound frame.

Hurts also has completed 71.4% of his passes for 3,184 yards and 30 touchdowns. He ranks third nationally in passer efficiency and second in total offense.

And contrary to what Gundy says, it isn’t entirely a one-man show. Hurts has top targets in Biletnikoff Award finalist CeeDee Lamb and speedster Charleston Rambo. Lee Morris has been a steady target, and a group of talented freshmen bolster the group.

Running back Kennedy Brooks has become more of a factor in recent weeks, especially since Trey Sermon’s season-ending left knee injury. Brooks has averaged 19 carries and 125 yards rushing the past three games. He never got more than 10 carries in a game the first eight games of the season, but he has had at least 15 in his past three. He’s regaining the form that made him a preseason All-Big 12 selection as he gets comfortable with his offensive linemen.

“I think Kennedy’s starting to get more in synch with those guys in how we’re going to handle and leverage different blocks,” Riley said. “We’ve just been more on the same page maybe is the best way I can describe it, and certainly, being the featured guy and being able to get him more carries and into the flow of it a little more has helped as well.”