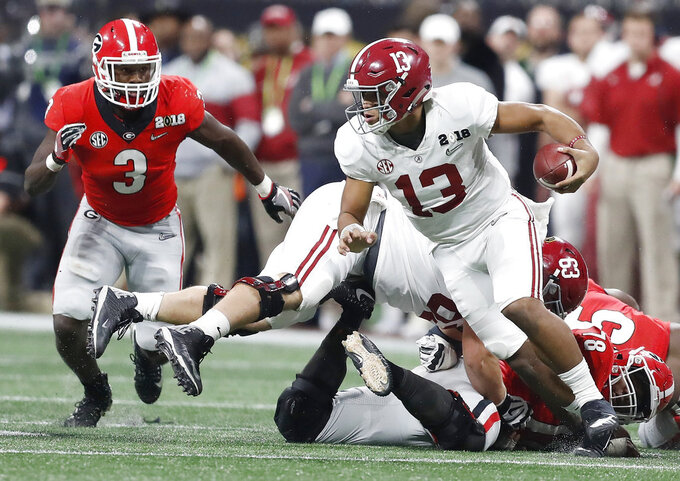 The coach famed for his scowl, his process and meticulous down-to-the-tiniest detail nature — even eating the same salad daily for lunch and, of course, oatmeal creme pies for breakfast — has turned title games in the Crimson Tide's favor with two gutsy calls.

When thinking of Saban, a gambler or risk taker isn't the first thing that comes to mind.

But when the time is right, the coach has stepped outside the box. In January 2016, Saban's fourth-quarter onside kick call propelled Alabama on to a 45-40 win over Clemson by not only setting up a touchdown drive but keeping Deshaun Watson & Co. off the field.

Last season, he brought in freshman quarterback Tua Tagovailoa for the second half to rally the Crimson Tide from a 13-0 deficit against Georgia, benching two-year starter Jalen Hurts.

The Tide and Tigers, both 14-0, meet again Monday night in Santa Clara, California, with the national title on the line.

Don't be shocked if Saban gambles — or at least takes a calculated risk — at some point. Anything to tilt the game in his favor.

"Well, I think when you're playing against a very good team and you anticipate that it's going to be a really tight game, that you're always looking for somewhere or someplace in the game where you can create an advantage for yourself and try to put your players in the best position to have a chance to be successful," Saban said. "You know, I think we do that for every game, but I think when you play in games like this, sometimes those plays can have a huge impact because it's probably going to be a pretty close game."

Clemson tight end Milan Richard was on the field with the kick return unit.

"We weren't expecting it," Richard said. "The way we were lined up, they tried to take advantage of it and it worked. It's something we'll be ready for, something we came back and prepared for and we'll try not to let happen again."

Tigers left tackle Mitch Hyatt felt like his team had the momentum before that onside kick. Watson and the Tigers' offense certainly were looking all but unstoppable.

That made Saban's timing so perfect.

"We knew if we just got the ball, we would go and win the game," Hyatt said. "The onside kick just really turned that game around."

The Tigers weren't the only surprised ones. Alabama offensive lineman Jonah Williams was a newly arrived freshman watching from Bryant Hall back in Tuscaloosa.

"Yeah, it was crazy," said Williams, now a unanimous All-American. "Me and all the early enrollees were in Bryant watching it on TV and we were just freaking out when it happened, because that was such a momentum swing in the game. That's the type of thing that this game takes.

"When you're playing great teams, sometimes you have to take risks. And when you do, you have to execute them. And sometimes that's the difference-maker in the game."

Maybe switching to Tagovailoa now seems like a no-brainer considering how poorly Alabama's offense was playing against Georgia and that he wound up being a Heisman Trophy runner-up some 11 months later. But Hurts had done little but win since claiming the starting job — and Southeastern Conference offensive player of the year honors — as a freshman.

Alabama's offense had produced just 94 yards in the first half and trailed Georgia 13-0 when Saban made the quarterback switch. Tagovailoa wound up passing for 166 yards and three touchdowns, including the game-winner to DeVonta Smith in overtime.

Afterward, Saban said he didn't think the Tide could run the ball well enough to overcome the struggling passing game and lack of big plays.

"I thought Tua would give us a better chance and a spark, which he certainly did," the coach said following the game.

Alabama doesn't take many gambles like that onside kick against Clemson, the Tide doesn't need them all that often. Certainly not this season, when Alabama was scarcely challenged until the SEC championship game against Georgia.

Alabama jumped ahead of Oklahoma 28-0 in the first 17 minutes of the semifinal game last Saturday, winning 45-34.

The Tide philosophy can best be described as, Trust in Nick. He has won six national titles — five at Alabama — after all.

"He's the greatest coach of all time," Williams said. "He coaches the games the way that he should, the way that he's (able) to win all these games. So we just trust him, and if he thinks that it's a smart, calculated risk, then we just go with it."