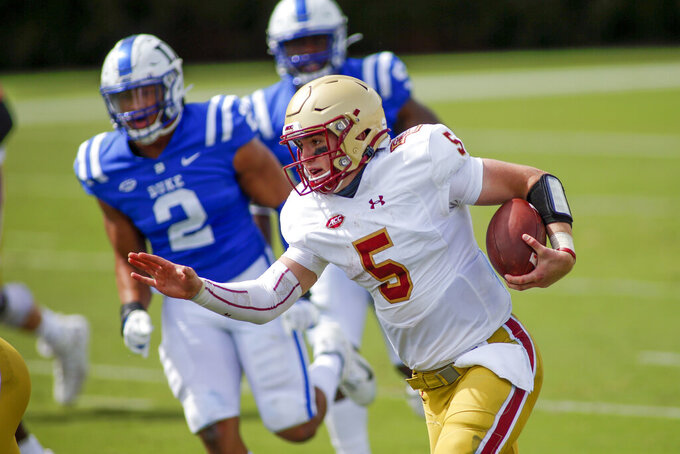 Boston College quarterback Phil Jurkovec (5) runs for a first down against Duke during the second half of an NCAA college football game, Saturday, Sept. 19, 2020, in Durham, N.C. (Nell Redmond/Pool Photo via AP)

BOSTON (AP) — Alumni Stadium will be empty when new Boston College coach Jeff Hafley and quarterback Phil Jurkovec get their first look at a game day in Chestnut Hill.

But if things keep going like this, they’ll be around for a lot more.

BC began the Hafley era with a 26-6 victory over Duke last Saturday -- the fewest points the Eagles have ever allowed in an ACC road game. A former Ohio State assistant, Hafley was hired to replace Steve Addazio but had to deal with the COVID-19 shutdown this summer while he prepared for his first season as a head coach.

"I was a little bit emotional on the ride in, just thinking about everything this team has been through, and how fortunate I was to coach these guys," Hafley said after the win. “What this team has done from the start, it's just been about each other, and it's never ever changed. And that's why we are where we're at right now.”

Jurkovec, a Notre Dame transfer who was granted an immediate eligibility waiver from the NCAA, was 17 for 23 for 300 yards, two touchdowns and an interception. With another week of practice, the Eagles have some new wrinkles planned for the Bobcats (1-2).

“We have a whole lot installed and some more that we can put in that we really haven’t shown,” Jurkovec said. “I don’t think we showed much against Duke.”

By winning his debut, Jurkovec accomplished something that the three most prolific quarterbacks in school history -- Doug Flutie, Matt Ryan and Glenn Foley -- couldn’t. Flutie threw for 118 yards in a 1981 loss to Navy; Ryan was intercepted three times in a 2004 loss to Syracuse, and Foley completed less than half his passes in a 1990 loss to Ohio State.

Zay Flowers was named ACC receiver of the week after catching five passes for a career-high 162 yards and a touchdown -- the first 100-yard receiving game for BC since 2018 and the first with more than 150 yards since 2012.

Texas State is one of only two FBS teams to have played three games already in this pandemic-affected season. The Bobcats lost to Southern Methodist in the opener and then lost to Texas-San Antonio in overtime before beating Louisiana-Monroe 38-17 last week.

That’s allowed them to take an early lead in some statistical categories: Quarterback Tyler Vitt’s six passes leads the nation, and he is third with 602 passing yards. Receiver Jeremiah Haydel is fourth with 215 receiving yards, and his three touchdowns are second; he is first with 37.3 yards per punt return and one punt return TD.

“They have an explosive group,” Hafley said. “They can score fast, and they’re going to try to score fast. They’re going to take shots downfield. ... Their head coach was at West Virginia and scored a lot of points there, and he’s calling the shots on that offense.”

BC receiver Kobay White, who led the team with 29 catches and five touchdown receptions last year, will miss the season after undergoing ACL surgery this week. Hafley said White knew he couldn't play last week but still wanted to help.

“He knew what was going on. He called me up that night probably about 10:00 to see if he could go early with the equipment people to go help set up the locker room because he wanted to contributed to the team,” Hafley said. “You’re talking about a great act of leadership. He’s an incredible kid and he’ll battle through it.”

BC and Texas State face each other for the first time. The Eagles added the Sun Belt Conference school to their schedule after it was revised due to the pandemic as their lone non-conference game.