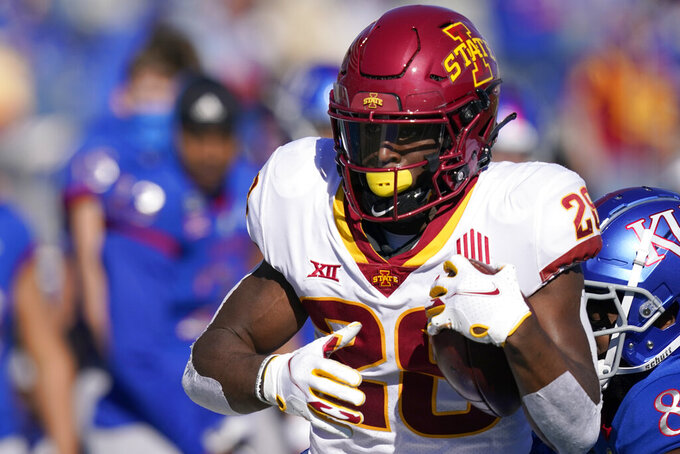 Iowa State running back Breece Hall (28) gets past Kansas cornerback Kyle Mayberry (8) during the first half of an NCAA college football game in Lawrence, Kan., Saturday, Oct. 31, 2020. (AP Photo/Orlin Wagner)

LAWRENCE, Kan. (AP) — Breece Hall usually cruises right past the turn toward the University of Kansas every time the sophomore running back makes the drive on Interstate 35 from his home in Wichita to Iowa State.

The Jayhawks hope they never see him stop in Lawrence again.

The Cyclones' standout matched a career high with 185 yards rushing and two touchdowns, including a 58-yarder in the second half, and added three catches out of the backfield in helping Iowa State to a 52-22 victory on Saturday.

Brock Purdy added 239 yards passing with two touchdowns through the air and another on the ground, and Kene Nwangwu also reached the end zone for the Cyclones (4-2, 4-1 Big 12), who bounced back from a tough loss to sixth-ranked Oklahoma State by beating the Jayhawks for the sixth straight time.

“I think we're growing,” Iowa State coach Matt Campbell said, “and the reality is we're heading into November, so as shocking as that is, just feeling — it's not a normal season. I can't believe we're almost in November. I'm excited and proud of our kids where we are, but I know the daunting task of ‘we’ve been here and we know what's to come.'”

The only bright spot for Kansas (0-6, 0-5) came on a 100-yard kickoff return by Kenny Logan in the second half. Otherwise, quarterback Jalon Daniels and the rest of the offense was woefully inept, the defense gave up gobs of yards on the ground and the special teams missed a short field goal and nearly surrendered a kick-return touchdown.

Daniels was just 16 of 29 for 165 yards with an interception and a touchdown run before leaving with a tweaked ankle.

“I just told them: ‘Hey, listen, I want to put this team together. I want your help,’” Jayhawks coach Les Miles said, “but I think it gets done and I think it gets done this year, and the thing we have to work against is those guys thinking because I'm in pain I'm going to inflict negative talk, and that's on every team in America today — good team and bad — but it just gets a little more amplified when you're looking for your first win.”

It didn't help the Jayhawks' cause that they were missing numerous players to injuries, COVID-19 protocols and opt-outs, including starting linebackers Denzel Feaster and Dru Prox and three of their top six wide receivers.

“The players we missed, it certainly was a number and group of players you'd like to have with us,” Miles said. “You could name five or six off the top of your head. But I'm not going to worry so much about the guys we didn't have but the guys we did, and I felt like we're not perfect, certainly, but daggone it, we can still put this team together.”

The first three TDs of the game were scored into a brisk wind out of the south, but the Cyclones finally took control going the other way at the end of the first half. They converted four consecutive third downs, three of them through the air, and the last a short touchdown toss from Purdy to Charlie Kolar that made it 20-7 at the break.

It didn't take Hall long to top 100 yards for the sixth time in six games. Nor did it take long for Iowa State to build the kind of cushion that could absorb Logan's kick-return touchdown that briefly gave the Jayhawks some life.

After taking over at their own 38-yard line, the Cyclones converted another third down with a pass to Landen Akers, then briskly moved into Kansas territory. And when the Jayhawks forced fourth-and-1 at their 36-yard line, Purdy answered by finding Hutchinson with a pass that allowed him to slip away from the defender for the touchdown.

Later in the half, the Cyclones pieced together a 77-yard touchdown drive that Hall capped from seven yards out, and the sophomore from Wichita punctuated his big day with a 58-yard TD run late in the fourth quarter.

Iowa State didn't need a 20-point fourth quarter to beat the Jayhawks like it did last season. Instead, the Cyclones were far enough ahead that they could enjoy watching backup QB Hunter Dekkers make a beautiful 30-yard touchdown pass to Joe Scates with a couple of minutes left for the final margin.

Kansas had chances to make it a game, but special teams were dismal — outside of Logan's return TD — for the second consecutive week. The Jayhawks, who have lost 10 straight dating to last season, were lousy in the punting and kicking game and had poor field position all afternoon.