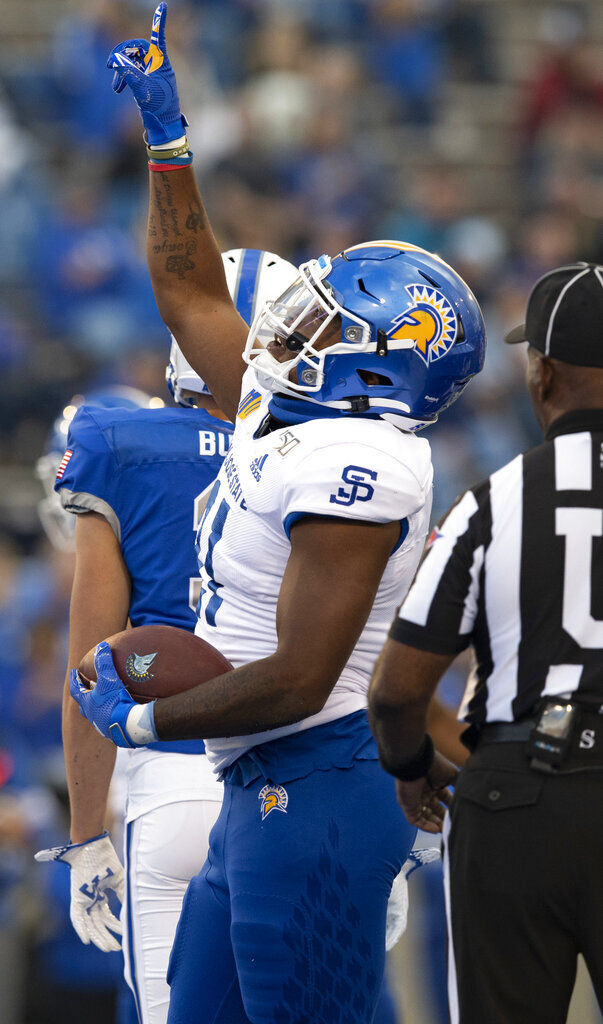 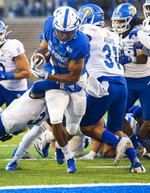 "Our offense has complete trust in both of those guys so whoever is up, we're behind them," said running back Taven Birdow, who rushed for 124 yards and two scores.

Sanders had started in place of Hammond, who sprained his ankle in last Friday's loss at Boise State and missed practice time in the days before the San Jose State game. Sanders, however, suffered a lower leg injury during the Falcons' first drive.

Christian Mallard had touchdown runs of 7 and 3 yards, Birdow had scoring runs of 1 and 3 yards, and Timothy Jackson added a 7-yard touchdown run for Air Force (3-1, 1-1 Mountain West), which improved to 4-1 in its series with San Jose State (2-2, 0-1). Geraud Sanders caught the long scoring pass from Hammond.

The Spartans scored on their opening possession, ending the drive with a 1-yard touchdown run by DeJon Packer. But the Spartans were soon overtaken by the Falcons, whose defense denied San Jose State with four fourth-down stops in the game, including one from Air Force's 1-yard line.

"I think that was a big turning point in the game, the first time we got a fourth-down stop, and to be able to consistently get those fourth-down stops was huge for our defense and for our confidence as a team," safety Jeremy Fejedelem said.

San Jose State coach Brent Brennan conceded the inability to finish off drives figured most prominently in the Spartans' defeat.

"Those plays were huge," Brennan said. "They were drive stoppers, all of them in the red zone or plus territory. Those were moments when your playmakers have to make a play. We didn't do it there. It was all a lack of execution."

Up by 11 at the half, Air Force separated itself with two quick third-quarter touchdowns. Joshua Stoner broke loose for 43 yards on a sweep around left end to the San Jose State 3 and Mallard scored the first of his two TDs on the next play.

Jake Koehnke's ensuing kickoff was held up by strong winds swirling through Falcons Stadium before dropping like a rock at the Spartans 20. A sprinting Grant Donaldson beat San Jose State's return team to the live ball to recover for Air Force and Mallard scored his second touchdown moments later to put Air Force up 34-10.

Air Force scored three straight touchdowns to take a 21-10 lead at halftime. Jackson finished the first scoring drive with a 7-yard scoring run and the Falcons moved in front when Hammond threw deep to Geraud Sanders, who was 5 yards clear of the Spartans secondary when he gathered in the 64-yard scoring pass

Air Force's defense set up the score with the second of two fourth-down stops of San Jose State's offense deep in Falcons territory.

The Spartans, who missed two earlier scoring opportunities when they were stopped short on fourth down, got a 25-yard field goal from Matt Mercurio just before the end of the second quarter.

Since joining the Mountain West in 2013, San Jose State has gone 0-7 in league openers, and two of those losses have come at the hands of Air Force.

San Jose State: The Spartans started strong but couldn't find a way to sustain their early success. They had their opportunities but four failed fourth-down conversion attempts, all deep in Air Force territory, left the Spartans running on empty.

Air Force: DJ Hammond opened up the Falcons' offense with his touchdown strike to Sanders and the Falcons then leaned on their corps of running backs to carry the load on offense with Sanders injured and Hammond fighting through lingering ankle soreness. The Falcons defense chipped in with key stops throughout the game.

Air Force: Plays at Navy next Saturday in the first of two meetings against a fellow service academy. Air Force hosts Army on Nov. 2.