Harbaugh, Michigan looking to play game outside US 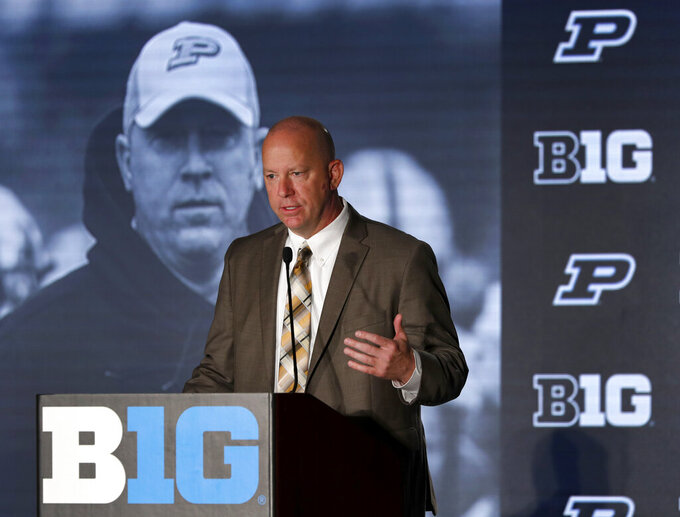 CHICAGO (AP) — Michigan hasn't played a game outside the United States in more than a century but coach Jim Harbaugh said that will change soon.

Asked about the possibility of playing a game in Mexico, Harbaugh tipped an upcoming international date.

"We're close to announcing playing a team on foreign soil," he said Friday at Big Ten media days. "I think there's something imminent; an announcement soon on that."

It came a day after outgoing conference commissioner Jim Delaney said he welcomed the idea of conference schools playing pre-conference or postseason games in Mexico City or other foreign destinations.

Michigan last left the country for a game in 1885, when the squad crossed the Detroit River to take on a Windsor, Ontario, club team. It faced the University of Toronto five years earlier in the provincial capital.

Wolverines players and coaches have traveled to South Africa, France and Italy in recent offseasons. They took part in open practices during the 2017 visit to Rome, the program's first jaunt across the Atlantic, but have not engaged in workouts during either of the two most recent overseas excursions. Donors picked up the tab for all three trips.

Nassau, Bahamas, has hosted a postseason bowl game since the 2014 season. The most recent international game saw Stanford and Rice open their 2017 seasons in Sydney.

Matt Millen will be back in a broadcast booth when the coming college football season begins, new heart and all.

The former Penn State star who played on four Super Bowl championship teams worked the room before Friday's Big Ten Kickoff Luncheon and said heart transplant surgery hasn't done much to disrupt his life or appetite to return to the game.

"I haven't had any problems. I'm really fortunate from what I've been told," he said. "I've had no setbacks or anything. Things are going pretty good."

Millen was diagnosed with amyloidosis, a rare disease in which abnormal protein buildup can cause organ failure. He waited about three months to get the call and received his new heart during a procedure in December.

He said he was told he'd be receiving a "high risk" donor heart. Millen had just one question before going into the operating room.

Millen was a popular NFL color man before serving as president of the Detroit Lions from 2001 to 2008. He and play-by-play man Kevin Kugler will team for an Aug. 31 Big Ten network broadcast to begin the new season.

Toren Young and his Iowa teammates find all sorts of ways to relax off the field, from movie nights in Iowa City to a local restaurant offering giant salads. One of his favorite breaks, however, might be more strenuous than football.

Once or twice a week, the junior running back steps into a boxing ring for a workout.

"It's definitely different from the workouts we do for football," he said Friday. "It's more short bursts; it wears you out a lot faster. It's a great stress reliever."

Lineman Alaric Jackson got him interested in the sport and the Hawkeyes might be hoping the extra conditioning makes Young more resilient. After finishing second on the team in rushing yards (637) and rushing touchdowns (five) last season and getting a good deal of action as a second-half back, Young figures to get just as many, if not more, chances to run the ball this fall.

Iowa and Nebraska are favored to contend for the Big Ten West division title won last season by Northwestern.

"It was great for Northwestern," Young said, "but it just reminds you that rankings really don't matter. It's all about showing up, taking care of the football and executing. It's good for everyone to see that's what really makes the difference."

Coach Jeff Brohm delighted Purdue fans when he agreed to remain in West Lafayette. Now he has to show he is worth the money he's being paid under his new contract.

One of the Big Ten's most dynamic players can't wait to help Brohm prove it.

"The Ohio State game really showed we can play with anyone," Moore said.

The freshman receiver finished the season with a Big Ten-best 114 receptions for 1,258 yards and 12 touchdowns. Brohm said he plans to make ample use of the 5-foot-8 back's speed this season.

"His versatility and his intelligence allows us to do more things," the coach said, adding the staff hopes to give Moore better chances as a returner this season.

"Coach wants to score the football every chance we get," he said. "We can use five receivers or no receivers but he does a great job of mixing things up. The offense is designed to be confusing to everyone else."

Brohm's contract, with $5.35 million in guaranteed compensation due in 2019, made him the third-highest paid coach in the Big Ten this season, behind Michigan's Jim Harbaugh and Penn State's James Franklin. He was heavily sought by hometown Louisville, where he played quarterback before a six-year NFL career.