Harbaugh seems set up for success in 5th season at Michigan 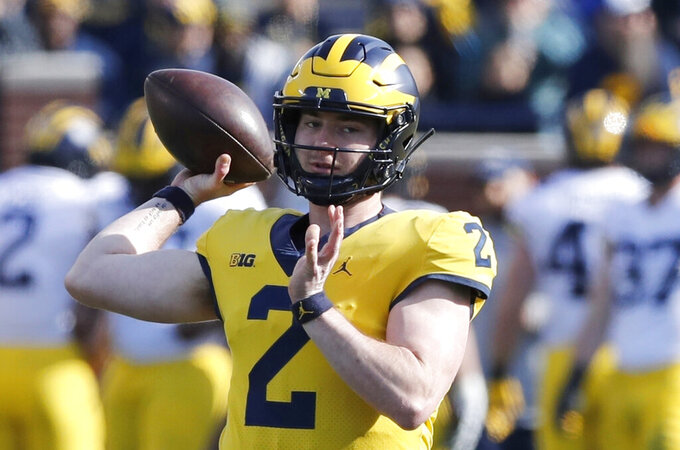 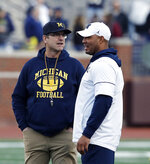 ANN ARBOR, Mich. (AP) — Jim Harbaugh seems set up for success at Michigan in his fifth season, leading a program that's a popular choice to win the Big Ten .

"That's where I would pick us," Harbaugh said.

Some are taking another step, predicting the Wolverines will earn a spot in the College Football Playoff to give them a chance at winning a national championship for the first time since 1997.

The optimism is tied to quarterback Shea Patterson returning as one of eight starters on offense, a handful of starters coming back on defense and a potentially favorable schedule. Rivalry games against Ohio State, Notre Dame and Michigan State will all be at the Big House.

The Buckeyes are undefeated against Harbaugh and have won 14 of 15 games in the series, but they will be breaking in Ryan Day to succeed retired coach Urban Meyer and a new quarterback .

"It really starts with our goals: win the Big Ten championship, qualify for the playoffs, win the national championship," Harbaugh said. "Those are our goals. Then you put those to the back of the mind and focus on how you can achieve those. That's what we're trying to do better, trying to do more, focus on that day to day. I think it's good right now. I think it's tight. But like an anaconda, you want to just keep squeezing it tighter and making it better."

Michigan has to find a way to get better at the end of the season after getting beat by Ohio State seven straight years and losing three bowl games in a row.

"I'm pretty sure that everyone has that on their mind," linebacker Jordan Glasgow acknowledged.

Patterson returns for a second season after transferring from Ole Miss. The dual-threat standout will play behind four returning starters in a new-look offense featuring a trio of talented receivers: Donovan Peoples-Jones, Tarik Black and Nico Collins.

"We've got the players to really be a special group," guard Ben Bredeson said. "First time in my time here that we've had this kind of depth here."

Michigan should be able to lean on some experienced players on defense, including defensive tackle Carlo Kemp, linebacker Khaleke Hudson along with defensive backs Lavert Hill and Josh Metellus.

The Wolverines lost a lot on defense with linebacker Devin Bush, defensive end Rashan Gary and cornerback David Long leaving for the NFL and skipping their senior seasons. Tight end Zach Gentry also chose to leave college with eligibility remaining, but he may not be as hard to replace on offense as running back Karan Higdon. Chris Evans wasn't eligible to return for his senior season because of an academic issue, taking a likely starter out of the lineup.

Hoping to spark a stagnant offense, Harbaugh hired Josh Gattis away from Alabama to be his offensive coordinator after no one had that title at Michigan last year. Gattis is expected to implement a no-huddle, spread offense that should suit Patterson well with run-pass options becoming a regular part of the scheme.

Michigan opens the season at home under the lights Aug. 31 against Middle Tennessee State in what should be a tuneup, but it could get tested the following week against Army at home. The Wolverines will have their first of two off weeks prior to their Big Ten opener Sept. 21 at Wisconsin. The Fighting Irish will visit the Big House on Oct. 26. Following a second bye week, Michigan will host the Spartans on Nov. 16 and Ohio State two weeks later.