Hartman: 'I owed it to Wake Forest' to return after ACC loss 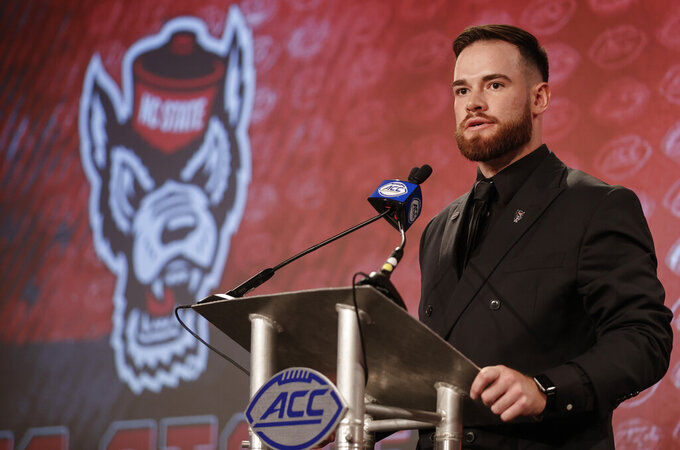 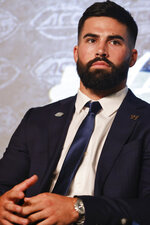 CHARLOTTE, N.C. (AP) — Sam Hartman walked off the field at Charlotte's Bank of America Stadium in December in despair after throwing four interceptions in Wake Forest's 45-21 loss to Pittsburgh in the 2021 ACC championship game.

The 22-year-old quarterback was so downtrodden he declined interviews after the game.

Hartman hasn't forgotten that night in which the Demon Deacons were held scoreless in their final 13 possessions and missed out on a chance to win the school's first ACC title since 2006.

“It's one of the reasons I came back. It's a legacy, right?" said Hartman, a redshirt junior who has thrown for 9,266 yards and 72 touchdowns during his four seasons. "Wake Forest invested in me and I want to invest back in Wake Forest. I felt like I owed it to them and their belief in me. ... I wanted to make it right."

Hartman was in good spirits on Wednesday, arriving at ACC Media Days wearing a “Peaky cap,” a nod to his favorite TV character Tommy Shelby from the early 1900s British crime drama “Peaky Blinders." (“I like his attitude and his mentality,” Hartman said.)

Aside from the ACC title game, Hartman had a spectacular season. He threw for 4,228 yards with 39 touchdowns and 14 interceptions, helping Wake Forest unseat national power Clemson to win the Atlantic Division championship. After the ACC loss, the Deacons bounced back to beat Rutgers 38-10 in the Gator Bowl to finish 11-3.

And while Tommy Shelby is known as a no-nonsense character who doesn’t take anything from anyone, Hartman said he's learned to “tone down” his trash talk during the game as he's matured .

“I’ve learned if you trash talk people, they hit you harder — so I've kind of shied away from that," Hartman said with a laugh. "I’m more likely to make cordial conversation.”

Wake Forest isn't the only Atlantic Division team returning an experienced quarterback — all seven will.

That group that includes Devin Leary with North Carolina State and DJ Uiagalelei at Clemson.

Wolfpack coach Dave Doeren said he's never seen this kind of scenario before, adding that he expects the Atlantic to be a “slugfest.”

“If you are playing a team whose quarterback is not savvy and doesn’t have experience and yours is, you have a great advantage," Doeren said. "We don’t have that in any game as far as playing against a nonstarter.”

Clemson coach Dabo Swinney said the difference between Uiagalelei and his successful predecessors Trevor Lawrence and Deshaun Watson is that Uiagalelei hasn't gotten the support from those around him.

Uiagalelei received heavy criticism last year for the Tigers' falloff in offensive production, but Swinney threw his support behind him Wednesday.

“I got a lot of confidence in DJ,” Swinney said. "He’s got some scars on him, some shrapnel — and that's going to serve him well. ... But you've got to go do it. And I believe he will do it.”

Commissioner Jim Phillips said the ACC is supportive of an expanded College Football Playoff, but added there “is more work to be done" before that comes to fruition.

In January, Phillips preached caution when it came to playoff expansion, citing concerns about athlete welfare, the impact on academics and the length of the season.

“The ACC took what we believe was a necessary stance regarding last fall’s CFP proposal,” Phillips said. “This was based on feeling we must all come together to address before rushing into a new model.”

But Phillips' optimism comes after what he called “great meetings” with other conference commissioners in April and June. He said he is confident that the concerns of the ACC and others will be addressed and “a new model with great access will ultimately come to pass.”

Phillips said an expansion still might take some time.

“I don’t expect us in September when we get together to line up and announce a new CFP structure,” Phillips said. “... I don’t know that there’s a separation now with those things. We’ll see, but I think the health and safety, the 365-day calendar review. I mean, we’ve talked about access, automatic qualifiers. There’s a lot of things to discuss.”

This will be the final season the ACC uses the two-division format.

Beginning in 2023, the league will go to one 14-team division and the teams with the top two winning percentages will advance to the annual conference championship game the first weekend of December in Charlotte.

That would seem to be an advantage to teams in the Atlantic Division that have had to compete for one spot with Clemson, which had won every ACC title since 2014 before being upended by Wake Forest last season.

“If you take the division votes every year, the Atlantic was for eliminating it, and the Coastal was for keeping it,” Wake Forest coach Dave Clawson said.