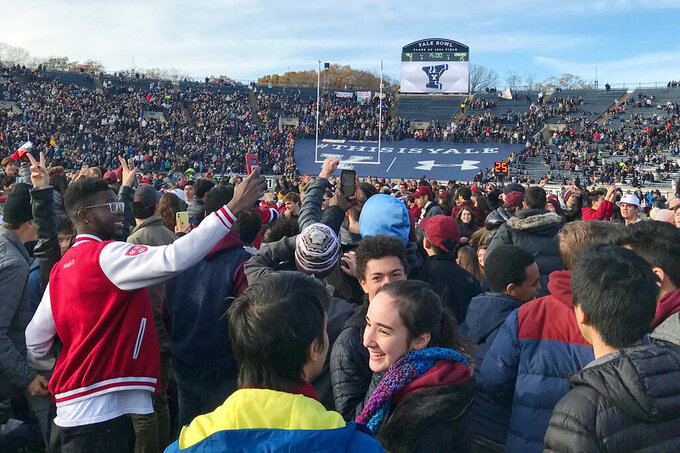 Demonstrators stage a protest on the field at the Yale Bowl disrupting the start of the second half of an NCAA college football game between Harvard and Yale, Saturday, Nov. 23, 2019, in in New Haven, Conn. (AP Photo/Jimmy Golen) 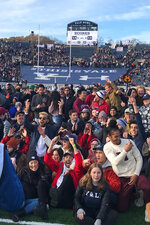 NEW HAVEN, Conn. (AP) — Protesters wearing the colors of both Harvard and Yale staged a sit-in at midfield of Yale Bowl during halftime of the 136th edition of the annual football rivalry known as The Game. Most walked off after about an hour with a police escort; about 20-30 who remained were arrested.

A few dozen protesters initially trickled onto the field as the Yale band finished performing its halftime routine, some holding a banner asking the schools’ presidents to divest from the fossil fuel industry. Other signs referred to Puerto Rican debt and the treatment of the Uighurs.

Yale officials said in a statement handed to reporters in the press box during the fourth quarter that the school “stands firmly for the right to free expression.”

“It is regrettable,” a statement attributed to the Ivy League said, “that the orchestrated protest came during a time when fellow students were participating in a collegiate career-defining contest and an annual tradition when thousands gather from around the world to enjoy and celebrate the storied traditions of both football programs and universities.”

Between 20 and 30 people were arrested, released and given a court date, protest organizers said. Rachel Sadoff, a junior at Harvard, said about 150 students from the two universities planned to participate and about 100 more who had been sitting in the stands joined in.

“Our goal was to spread the word,” Sadoff said. “If more people speak up, our colleges will have to listen.”

Largely of college age but with a few older protesters mixed in, the group chanted: “Hey Hey! Ho Ho! Fossil fuels have got to go!” One banner read “This is an emergency.” Mostly they sat or milled around near midfield, with some taking selfies; a vape pen and a crushed can of beer were left behind.

Police in yellow vests lined up alongside the sit-in but did not intervene. When the 15-minute halftime expired and the protest continued, hundreds more fans streamed onto the field to join in. Fans remaining in the stands began to boo, but only briefly.

The public address announcer implored the group to leave, repeating, “As a courtesy to both teams, the game must resume.” Protesters responded by chanting, “OK, boomer.”

Players tried to remain warm on the sideline in mid-40 temperatures, but then returned to their locker rooms. Harvard coach Tim Murphy was given an update from the game officials and public safety officers as the protest continued.

Yale Police Chief Ronnell Higgins spoke to the protesters over a megaphone, trying to convince them that they had made their point, but it would be lost if the situation escalated.

After about an hour, police formed a line and moved forward, from the Yale sideline toward the Harvard sideline. A protest leader encouraged all “internationals” to leave. An agreement was reached to escort the remainders off, with one police officer to every two protesters.

Those who did not leave then were informed by Higgins that they would be arrested. Asked how many people were taken into custody, Higgins referred questions to the police public information officer. Messages left with Yale and New Haven police were not immediately returned.

Yale coach Tony Reno said the team reverted to its plans for when a game is interrupted by lightning. The Bulldogs rallied from a 17-point, fourth-quarter deficit, winning 50-43 in double overtime in darkness in the unlit, century-old Yale Bowl to clinch the Ivy League championship and conclude one of the strangest editions in the rivalry’s 144-year history.

“It’s what makes Yale Yale,” Reno said. “Our group, I’m sure if you asked them and the Harvard guys what makes it special, it’s not only the game of football. It’s the passions.”