Hawkeyes host Northwestern with sense of urgency after loss 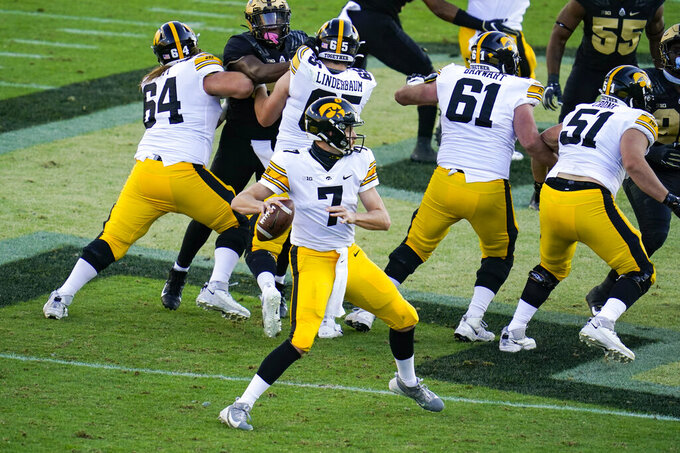 Kirk Ferentz's best Iowa teams tend to improve by the week, which means the Hawkeyes better get going if they want to be a factor in the Big Ten West.

The timetable is accelerated this season because of the conference's shortened schedule. Ferentz is looking for his team to make a big jump at home against Northwestern on Saturday after its season-opening loss at Purdue.

“If we’re going to be successful, that’s paramount," Ferentz said. "We have to do that. There’s just not much wiggle room. It’s eight scheduled games plus one, so every game is really critical.”

Northwestern comes to Iowa City off a 43-3 win over Maryland and looking much improved following a three-win season in 2019. The Wildcats' offense has a polished quarterback in Peyton Ramsey and a rushing attack that generated 325 yards in the season opener against the Terrapins.

The Wildcats' defense surrendered just 74 yards over nine series after Maryland finished its first possession with a field goal.

“We need to bring our A game,” Iowa quarterback Spencer Petras said. “With eight plus one, every game is extremely important. With the way our standings work, we need to play our best on Saturday.”

Petras was mostly solid in his first career start, overcoming a slow start against Purdue to throw for 265 yards with no touchdowns or interceptions.

“Obviously he wanted to go out there and throw for a million touchdowns and a million yards. Not realistic,” offensive lineman Coy Cronk said. "For someone's first start, the poise and his ability to lead when it wasn't going perfect I was impressed with. I think Spencer's headed in the right direction. I like the way he's approached this week — flushing it and moving on and let's get ready to go 1-0 this week.”

Look for the Hawkeyes' experienced receiver corps to get more involved. Tight end Sam LaPorta and running back Tyler Goodson combined for 10 receptions against Purdue. Ihmir Smith-Marsette, the leading receiver in 2019, was targeted five times and had no catches and two drops, according to Pro Football Focus.

“I think they’re going to take some shots, especially with their new quarterback,” Northwestern cornerback Cam Ruiz said. “I think he has an arm. We need to stay on top, we need to make some plays like we did last week. Keep it going, get some picks, get some turnovers.”

Iowa's Cronk and Northwestern's Ramsey lived together for two years when they played at Indiana. Both are graduate transfers.

“He’s one of my best friends in the entire world. I love him to death,” Cronk said. “He knows this week we’re not going to be talking to each other and there’s not a whole lot of love lost there.”

Iowa's two interceptions against Purdue gave the Hawkeyes 55 since 2017, most among Power Five teams and tied with Florida Atlantic and Louisiana Tech for most in the FBS.

Northwestern's Pat Fitzgerald has had more success against Ferentz than any other current Big Ten coach, having gone 8-6 against the Hawkeyes. Asked about there being no fans at Kinnick Stadium to heckle him Saturday, Fitzgerald feigned ignorance.

“It's always seemed to me every year I've been to Iowa City that people really like me,” he said. “Maybe I just missed it.”