Hayden Fry, Texan who turned around Iowa, dies at 90 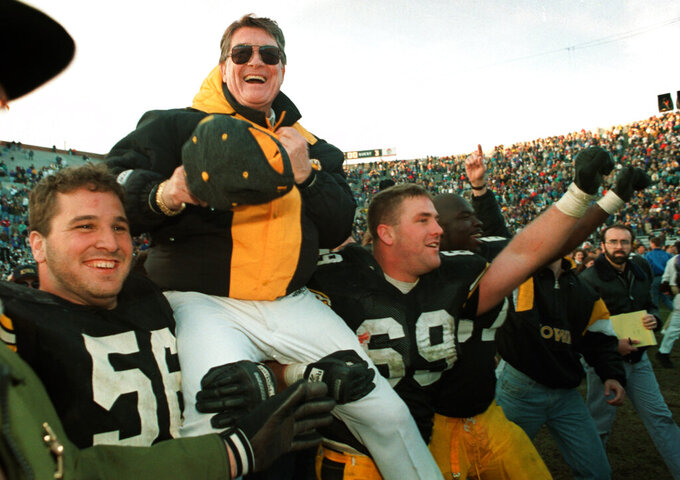 FILE - In this Nov. 20, 1993, file photo, Iowa football coach Hayden Fry is carried off the field after his team defeated Minnesota in an NCAA college football game, giving him his 200th career victory in Iowa City, Iowa. Fry, the Texan who revived Iowa football and became a Hawkeye State institution, died Tuesday, Dec. 17, 2019, after a long battle with cancer. He was 90. (AP Photo/Charlie Neibergall, File) 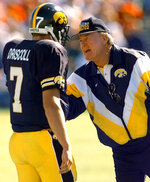 Hayden Fry, the Texan who revived Iowa football and became a Hawkeye State institution over two decades as a Big Ten coach, has died. He was 90.

Fry's family announced through the University of Iowa that the former coach died Tuesday with his family at his side after a long battle with cancer. He had been living in the Dallas area with his wife, Shirley.

“We are proud to know that our father’s life had a positive influence on so many people, the players, the coaches, and the fans who played for, worked with, and supported his long and successful coaching career,” the family said in a statement. “His legend will live forever with the people he touched and inspired, and the programs he led to greater heights.”

Fry, a native of Eastland, Texas, had never been to Iowa before taking over the Hawkeyes in 1979, hired by then-athletic director Bump Elliott, the former Michigan star who died earlier this month.

The Hawkeyes had slogged through 17 consecutive years without a winning season when Fry arrived. He changed everything.

He had the uniforms redesigned to make them look more like the black-and-gold ones worn by the Pittsburgh Steelers, the NFL's dominant team at the time. The familiar Tigerhawk logo was unveiled during Fry's tenure. He had the visitors' locker room painted pink, a tradition that still stands. Roaming the sidelines in his familiar dark sunglasses and white pants, Fry coached the Hawkeyes for 20 seasons, winning 238 games and three Big Ten championships.

“Though Hayden was born in Texas and moved there more recently to be closer to our family, his love for the University of Iowa, his players and coaches, the people of Iowa, and the state of Iowa, is well known,” the family said. “Hayden often shared, 'I’ll Always Be a Hawkeye.'”

Fry's greatest season at Iowa was 1985, when the Hawkeyes were No. 1 in the AP rankings for five weeks and had Heisman Trophy runner-up Chuck Long at quarterback. Iowa finished 10-2 as Big Ten champions and ranked 10th in the country. He coached three Rose Bowls with Iowa, though he never won one.

“He had a special way of making you feel good all the time even in the tough games and in the tough moments,” Long said.

Fry started his coaching career at Odessa (Texas) High School in the 1950s, not long after playing quarterback at Baylor. His first college head coaching job was at SMU in 1962, and he was instrumental in desegregating the team and the Southwest Conference as both coach and athletic director. In 1965, Jerry LeVias became the first black football player to sign a scholarship with a team in the Southwest Conference.

“Coach Fry caught a lot of hell for doing what he did,” LeVias said in a statement released by Iowa. "After he left SMU, he went to North Texas, and he couldn’t get a break in Texas – sometimes coaching and having to go to good bowl games. All of a sudden, Iowa calls. When one door closes, the Good Lord has plans. It was like in the Good Lord's plans for him to come to Iowa.”

At Iowa, Fry not only produced winning teams, but also a long line of successful head coaches who worked and played for him.

“His Hall of Fame career is well known, but personally, he will always be the man who took a chance on me at the start of my coaching career," Ferentz said. “I was proud to coach with him and honored to succeed him when he retired.”

Stoops on Twitter called Fry: “A man that we all loved and revered.”

Fry retired as Iowa's winningest coach in 1998, a mark since surpassed by Ferentz. He was first diagnosed with prostate cancer before his final season at Iowa and he did his best to keep the news from his players and coaches while he received treatment.

“My doctor at the hospital said, 'Coach, you may be the luckiest guy in the world. You're almost 70 years old and you're in real good physical condition other than the cancer.' He said I could live another five years. That was 16 years ago, and I'm still here," Fry told the Cedar Rapids (Iowa) Gazette in 2015, when he was living in Nevada.

Fry is survived by his wife, four sons, a daughter, a stepson and a stepdaughter. Plans for a memorial service are pending, the family said.