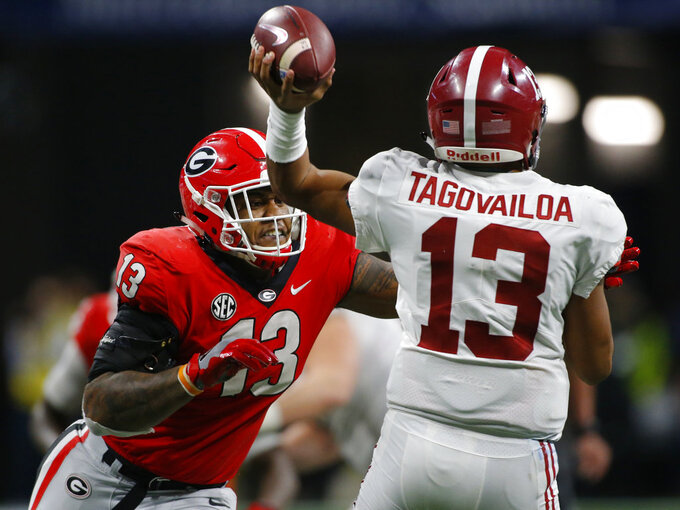 Georgia defensive end Jonathan Ledbetter (13) goes in for a sack on Alabama quarterback Tua Tagovailoa (13) in the second half of the Southeastern Conference Championship game between Georgia and Alabama in Atlanta, Saturday, Dec. 1, 2018. Georgia lost 35-28. (Joshua L. Jones/Athens Banner-Herald via AP)

NEW YORK (AP) — Tua Tagovailoa rolled across the floor of the New York Stock Exchange on a black scooter with a little Alabama sticker on the front, his sprained left ankle in a gray plastic boot, safely propped up as he pushed off with his right foot.

The Crimson Tide quarterback and fellow Heisman Trophy finalists Kyler Murray of Oklahoma and Dwayne Haskins of Ohio State were on Wall Street on Friday to ring the closing bell on a day the Dow Jones Industrial Average closed down 558 points.

Stock for the three first-year starters has been soaring this season. A year ago they were second on their team's depth chart. On Saturday, one of them will win the Heisman Trophy.

Tagovailoa picked up where he left off in the second half of last season's national championship game victory against Georgia to lead the top-ranked Crimson Tide back to the playoff as a sophomore.

Haskins, a third-year sophomore, stepped in after the departure of a four-year starter and smashed Ohio State and Big Ten passing records.

Murray, a fourth-year junior, replaced last season's Heisman winner and had an even better season than his predecessor. Murray waited the longest to finally take over a team, transferring from Texas A&M after a rocky freshman season, taking a redshirt year to satisfy NCAA transfer rules and then backing up Baker Mayfield in 2017.

For the 16th time in the last 19 years, a quarterback will win college football's most coveted individual award and that should not be a surprise this season. This has been the year of the quarterback, with FBS records for completion percentage, yards per pass and yards passing per game all within range as bowl season arrives. For the first time since 2008, when Oklahoma's Sam Bradford, Texas' Colt McCoy and Florida's Tim Tebow were the Heisman finalists, only quarterbacks were invited to New York for the trophy presentation.

There is also a good chance that for just the second time in the 83-year history of the Heisman, the top-five vote-getters will be quarterbacks, too. West Virginia's Will Grier and Washington State's Gardner Minshew II were the other contenders, but neither drew enough support to earn a trip to New York. In 2001, when Nebraska's Eric Crouch won the Heisman, the top six in the voting were quarterbacks.

During a 30-minute interview session with reporters at the Stock Exchange, Tagovailoa was asked a lot about his health. He sprained his ankle in the Southeastern Conference championship game last week and said he expects to be fine for the playoff, when No. 1 Alabama faces No. 4 Oklahoma and Murray in the Orange Bowl on Dec. 29. Alabama trainer Jeff Allen is traveling with Tagovailoa on the awards circuit this week.

"Life throws problems at you sometime and it's how you deal with it," Tagovailoa said. "Just trying to get better."

Murray fielded numerous questions about his future in baseball. He was a first-round draft pick by the Oakland Athletics in June and has already signed $4.66 million contract. This will be his one and only season as a college starting quarterback.

"My future's already kind of been decided as of right now," Murray said. Asked if he could see himself trying to play both sports, Murray said: "I would love to do be able to do both if that was possible. I don't know how possible that is."

The question Haskins will face is whether to return to college for another season or enter the NFL draft. He could be a first-round pick.

"After the bowl game I'll sit down with my family and talk about it," Haskins said. The sixth-ranked Buckeyes face No. 9 Washington in the Rose Bowl on Jan. 1 in what will be coach Urban Meyer's last game before retirement.

Tagovailoa spent most of the season as the Heisman front-runner, but Murray kept bailing out Oklahoma's faulty defense and gaining ground in the race. It seems Murray might have taken the lead last weekend, when Tagovailoa threw two interceptions against Georgia and could not finish the game.

"If I win it that's awesome," Tagovailoa said. "If not, it's not the end of the world."