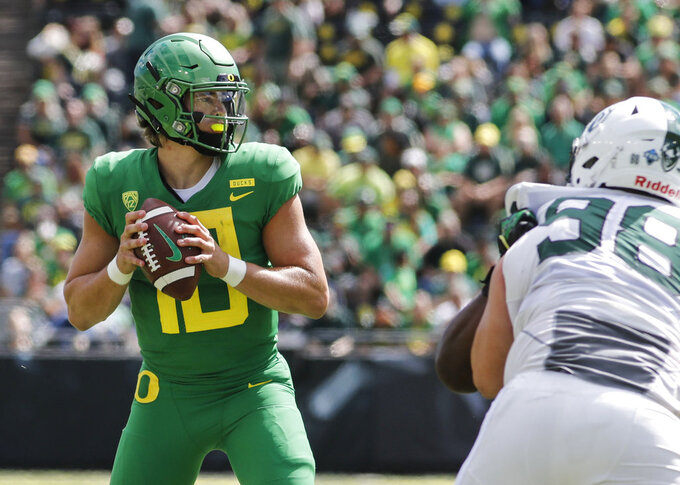 EUGENE, Ore. (AP) — Justin Herbert threw for 250 yards and four touchdowns before heading to the bench in the third quarter, and No. 23 Oregon routed Portland State 62-14 on Saturday.

It was the 22nd straight non-conference win for the Ducks (2-0). Herbert, who completed 20 of 26 passes against the Vikings, now has 10 total touchdowns — nine passing and one on the ground — in two games so far this season.

Portland State (0-2) has lost 15 consecutive games dating to 2016, including eight straight on the road. The FCS-level Vikings went 0-11 last season and have allowed 134 total points in their two games this year.

Portland State quarterback Jalani Eason threw for 111 yards and two touchdowns, but he was also sacked four times by Oregon's defense. Charlie Taumoepeau caught five passes for 125 yards and both TDs for his second-straight game with more than 100 yards receiving.

Herbert hit different receivers with each of his touchdowns. Tony Brooks-James ran for 107 yards and two scores, while freshman CJ Verdell ran for 106 yards and another TD.

Herbert also led the Ducks' offense efficiently in a 58-24 victory over Bowling Green last week, passing for 281 yards and five touchdowns and running for 41 yards and another score.

Herbert's first TD pass was an 18-yard strike to Jaylon Redd. He then added a 9-yard toss to Tabari Hines that capped an 8-play, 99-yard drive to make it 14-0 after the first quarter.

Kano Dillon caught a 20-yard scoring pass from Herbert to stretch the Ducks' lead. Eason connected with Taumoepeau on a 71-yard touchdown to narrow the gap.

Taumoepeau also scored in the Vikings' opener on a pair of catches for 48 and 75 yards, for his second career game with 100-plus receiving yards.

Cyrus Habibi-Likio ran for a 1-yard score and Johnny Johnson III added an 11-yard TD catch to give the Ducks a 35-7 lead at the half .

Brooks-James had a 1-yard scoring run to open the second half for Oregon, before freshman Travis Dye's long 42-yard TD dash . Dye is the younger brother of Oregon inside linebacker Troy Dye.

Backup quarterback Braxton Burmeister replaced Herbert for the final drive of the third quarter. Brooks-James added a second 1-yard TD dive with 5:16 left in the game before Verdell's 2-yard run capped the scoring.

Portland State: The Vikings are opening the season with two FBS-level teams. Portland State is 4-37 against the top division, with two of those wins coming in 2015 against Washington State and North Texas under current coach Bruce Barnum. Portland State will make more than $500,000 for playing the Ducks, Barnum said this week.

Portland State hosts the College of Idaho next Saturday.