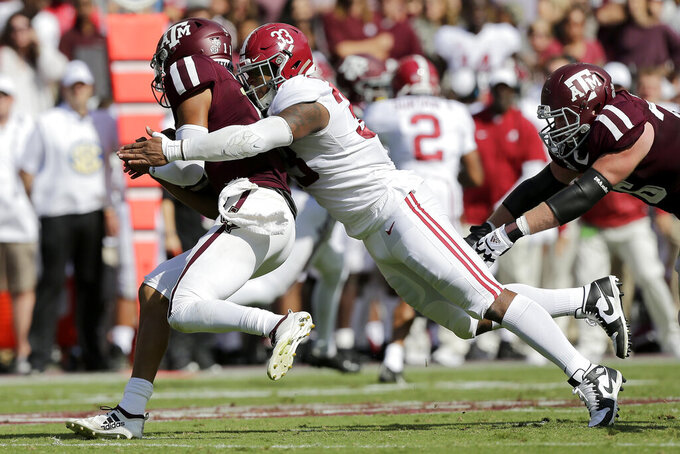 MOBILE, Ala. (AP) — A year ago, Oregon quarterback Justin Herbert decided to stick around for his senior season instead of turning pro. Wisconsin linebacker Zack Baun didn’t really have much choice.

Both had impressive final college seasons, including a head-to-head Rose Bowl matchup, and believe they’re more NFL-ready now. They’re among the participants in Saturday’s Senior Bowl game for senior NFL prospects and some junior graduates.

Some of them, including Baun, have only recently emerged as legitimate prospects. Others like South Carolina defensive tackle Javon Kinlaw and Michigan State defensive end Kenny Willekes stayed in college for one more season largely because of injuries. Ditto for Alabama linebacker Terrell Lewis.

“I wanted to be a better leader, a better teammate, a better quarterback,” said Herbert, who would also have been a likely first-round draft pick last year. “All these things that I felt like I accomplished this year.”

He did turn in perhaps his best season with 3,471 yards, 32 touchdowns and six interceptions. Herbert is one of the top quarterbacks in an upcoming draft where LSU Heisman Trophy winner Joe Burrow is the likely No. 1 pick and some of the 99 underclassmen granted eligibility by the NFL are among the most coveted prospects.

Alabama quarterback Tua Tagovailoa is one of them and a potential top-5 pick.

Lewis’s fellow Alabama linebacker Anfernee Jennings opted to return for his senior season and try to improve his stock, and feels like he did just that.

“I think most of our guys have made a good decision that way,” Saban said. “I think in Anfernee and Terrell’s case, both, they certainly did themselves a lot of good by coming back. I think most of our players who have come back have been able to do that.”

Herbert and Baun are hoping that call pays off for players like them, too.

Willekes (broken leg) and Kinlaw (torn hip labrum) both indicated they likely would have left after their junior seasons but for the injuries. Kinlaw especially is pegged as a likely first-rounder after earning first-team Associated Press All-America honors.

“I do feel a lot more ready, especially mentally,” Willekes said. “I feel like I was still a little young last year and I had some growing up and maturing to do and I was able to do that.”

Lewis had two major injuries but was finally healthy last season and had six sacks, leading the team with 16 quarterback pressures. He missed 10 games in 2017 with an upper arm injury suffered in the opener against Florida State and sat out the next season with a preseason knee injury.

His health has been a hot topic in conversations with NFL teams.

“That’s definitely a big question for a lot of organizations: Can they trust that I’ll be durable to last throughout the whole season,” Lewis said. “I don’t blame them. I would too if I was a GM and I’ve got a million dollars that I’m just handing to a young 21-year-old kid. I invite the questions with open arms, so it’s not really that big of a deal for me.”

Baun made huge leaps as a senior, more than doubling his previous career totals with 12.5 sacks and 19.5 tackles for loss. He said he didn’t even consider leaving early for the draft but buckled down in trying to work on his weaknesses.