Herman says no mandate for Texas players over school song 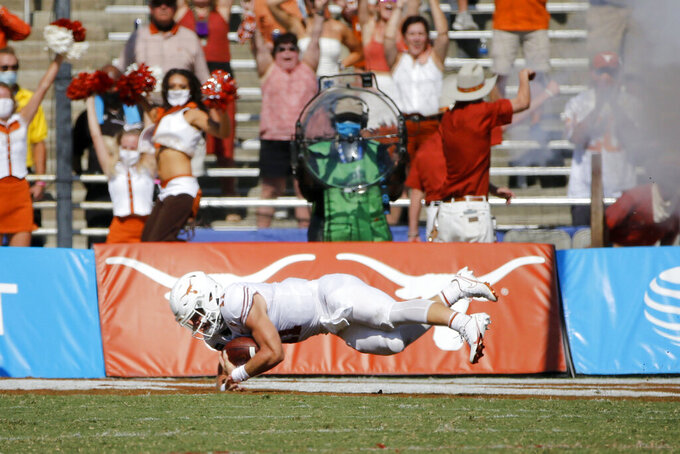 AUSTIN, Texas (AP) — Texas coach Tom Herman said Monday there is no mandate that his players stay on the field for the post-game singing of the school song, an issue that has erupted into controversy among Longhorns fans.

Herman was forced to answer more questions about the song after athletic director Chris Del Conte last week called it an expectation that players stay together on the field for “The Eyes of Texas.” A group of players said they would no longer sing it or stay on the field because of concerns over the song’s links to racist elements in the school’s past.

“Nobody, from Chris Del Conte to myself to any other coaches, have mandated our players do anything,” Herman said. “Mandate is a very strong word. That’s never been a word that’s been used to us as coaches from our administration, nor from us as coaches to our players.”

The controversty has lingered and got more attention Oct. 10 after Texas lost to Oklahoma when photos posted online showed quarterback Sam Ehlinger still on the Cotton Bowl field during the song but no other players standing near him.

Herman said Monday he continues to encourage players to sing or stay on the field to show appreciation for the school and fans, but will respect those who don't.

The players were told over the summer they didn't have to sing the song. Del Conte raised the pressure on them he called it an expectation they at least stay on the field; he met with the football team last week, and Herman called it a good discussion without disclosing details.

Over the summer, Herman marched with a group of Longhorns players from campus to the state Capitol in a demonstration against racial injustice. He said Monday his team is not fractured by the song issue. Texas is 2-2 and unranked after consecutive losses.

“That doesn't mean everybody agrees,” Herman said. “We’re a very divided country. Our locker room is exactly the opposite. Our locker room respects, and in fact admires, guys that do speak their mind. Everybody is listened to. There are no grudges held for anybody who feels a certain way about anything.

“I respect the hell out of our team and our team leaders for fostering that environment of inclusivity,” Herman said.