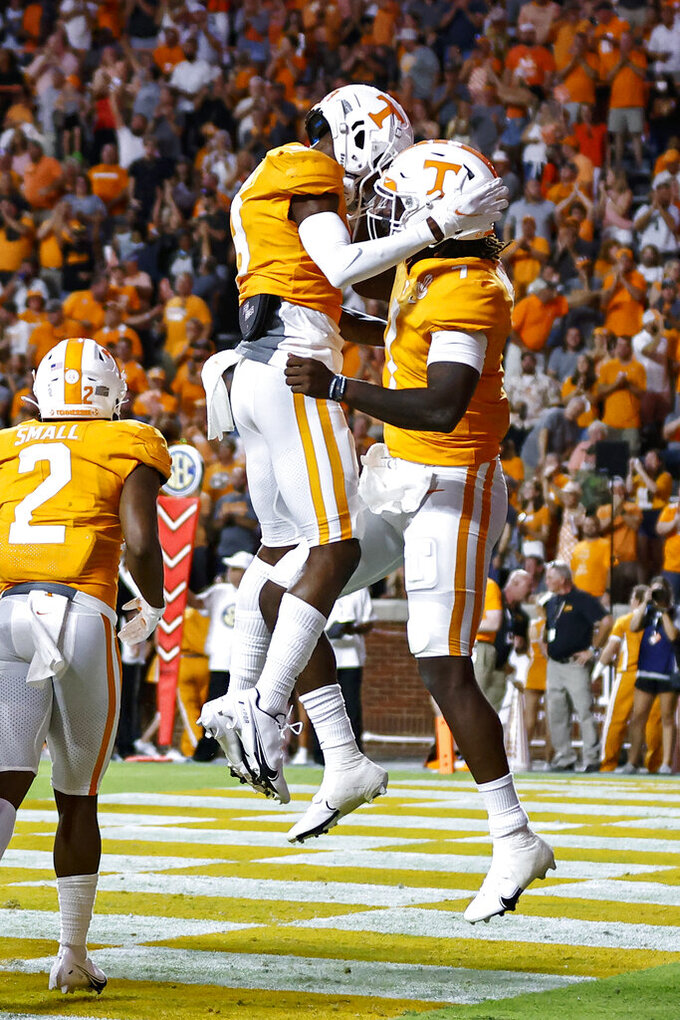 KNOXVILLE, Tenn. (AP) — If Tennessee head coach Josh Heupel's offense is going to work, its got to start on the ground.

The Volunteers' 38-6 season-opening win over Bowling Green on Thursday night was a perfect example of how the first-year coach's up-tempo attack can function on all cylinders.

The Vols struggled with just 67 yards rushing and led 14-6 at halftime. With a focus on the ground assault, they amassed 259 yards and separated themselves from the Falcons.

Jabari Small finished with 124 yards rushing with two touchdowns. Tiyon Evans added 116 yards on the ground and a touchdown.

“Offensively there were times where we were clicking, played efficiently,” said Heupel. “Other times there were things we could control that we didn’t operate as efficiently as we can. Going to need to clean those things up as we move deeper into the season.”

Tennessee quarterback Joe Milton, a transfer from Michigan, ran for two scores and was 11-of-23 passing for 140 yards. His only completion of the second half was a 40-yard touchdown to Cedric Tillman.

“There were a couple times I didn’t like Joe's decision-making,” Heupel said. “There are some things he has to clean up. At the same time, there were some positives as well. We believe in Joe.”

"We played good, had a lot to learn from but we will get better," Milton said. “Execution on my part is something we can clean up and learn from.”

The game marked the start of the 100th season of football in Tennessee's Neyland Stadium.

“What an awesome experience for our players and our staff," Heupel said of the crowd of more than 84,000. "You could feel the student section and Neyland’s energy from the beginning of the game. We appreciate that energy and we needed that.”

Bowling Green trailed just 14-6 at halftime while shutting out the Vols in the second quarter. The Mid-American Conference representative wore down in the final 30 minutes.

“Our football team was much better at getting aligned (in the first half),” said Bowling Green coach Scot Loeffler. “We were prepared for the tempo (offense). We tackled better.”

Tennessee's rush defense was impressive, limiting the Falcons to just 32 yards on the ground.

“Overall, we did well, especially in the run game," said Theo Jackson, a member of the Vols secondary. "In the pass game, we just need to clean things up.”

After rushing for just 67 yards and leading by eight points in the first half, Tennessee improved on its first drive of the third quarter. Evans ran twice for 32 yards, Small carried three times for 29 yards and Milton took it the final yard for a TD and 21-6 advantage. The Vols covered all 72 yards on the ground.

Tennessee's lead went to 28-6 when Evans ran 19 yards for a touchdown.

The Falcons kept the pressure on Tennessee.

One of the drawbacks of the Vols' up-tempo offense is that it forces the defense back on the field quickly. After forcing Tennessee to punt with a possession of just over a minute, Bowling Green's second second-quarter drive made progress. The Falcons got the ball as far as the Vols' 17 before some negative plays set up Needham for a career-long 50 yard field goal and a 14-6 difference at halftime.

The Vols gave an indication of what their offense was going to look like when they moved the ball 67 yards in 2:59 on their first possession. Milton capped the march with a 10-yard run and 7-0 lead.

Tennessee's second score took just 2:01 to go 67 yards. A 38-yard pass connection between Milton and Princeton Fant set the table for Small to score from the 1 for a 14-0 lead after the first quarter.

Tennessee: The lopsided victory is the first step for Heupel toward pointing the Vols' program in the right direction. Having success against a team ranked No. 129 among 130 FBS teams can give a measure of confidence that will help next weekend when Tennessee entertains Pittsburgh.

Bowling Green: The Falcons are taking on this season loaded with freshmen. The key will be to find the positives out of every game, no matter the outcome, and use them to build a foundation.

Heupel did not elaborate on the individual situations but expected all three to return to the team soon.

Tennessee: When Pitt visits Neyland Stadium next Saturday, it will be the “Johnny Majors Classic.” Majors, who passed away last year, coached at both Tennessee and Pitt. He also played for the Vols.

Bowling Green: The Falcons, who took home $1.5 million from their visit to Knoxville, will entertain South Alabama next Saturday.