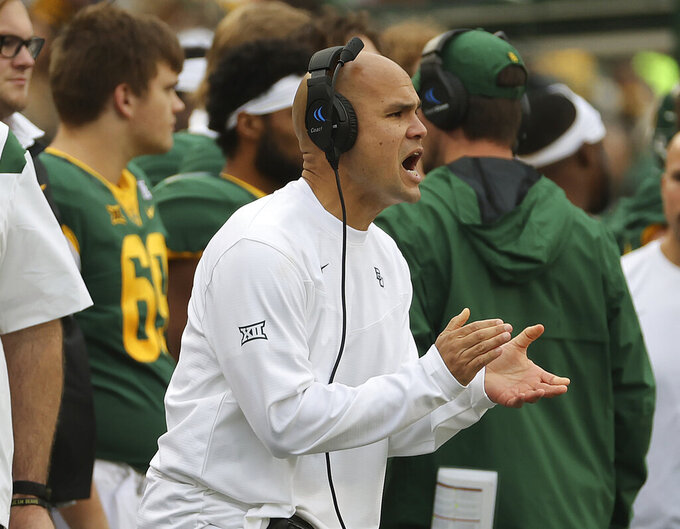 FILE - Baylor head coach Dave Aranda calls to his players in the second half of an NCAA college football game against Texas Tech, Saturday, Nov. 27, 2021, in Waco, Texas. The Southeastern Conference's most prolific offense clashes with one of the better defenses in the Big 12 when No. 8 Mississippi meets sixth-ranked Baylor in the Sugar Bowl. (AP Photo/Jerry Larson, File)

Line: Mississippi by 1 1/2, according to FanDuel Sportsbook.

Possibly a top-10 ranking and conference pride. Baylor is the Big 12 champion and is matched up with the third-highest ranked SEC team because the top two — Alabama and Georgia — both received bids to the four-team College Football Playoff. Ole Miss also has a chance to win 11 games in a season for the first time.

Baylor: RB Abram Smith has rushed for 1,429 yards and 12 touchdowns. He needs 119 yards in the Sugar Bowl to break the Baylor single-season record for yards rushing set by Terrance Ganaway in 2011.

Mississippi: QB Matt Corral has accounted for 3,936 total yards and 31 touchdowns. He ranks in the top 20 nationally in several categories, including total offense (328 yards per game), yards passing (3,339), completion percentage (68.4%), yards per pass attempt (8.8) and completions per game (21.7). Corral is one of only four QBs in the Football Bowl Subdivision with at least 20 TDs passing and 10 rushing.