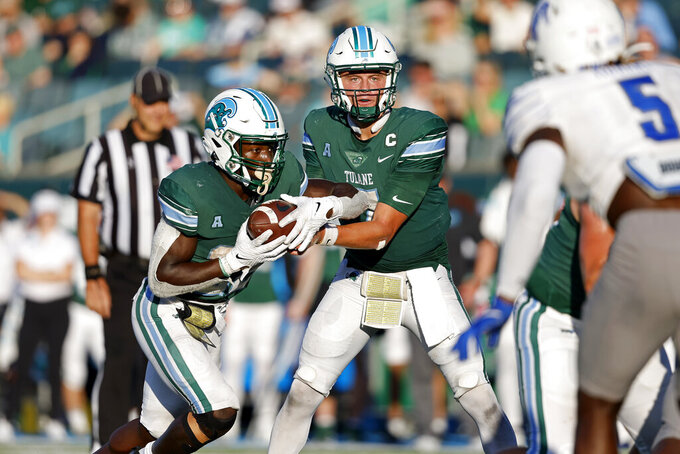 NEW ORLEANS (AP) — Tulane's campus and surrounding areas are abuzz over the historic significance of Saturday's clash between the No. 16 Green Wave and No. 22 UCF.

Tulane coach Willie Fritz is pleased, but not so inclined to feed into it.

“It's my job to try to have our guys as prepared as they can possibly be," Fritz said. “Talking about what-ifs and this, that and the other thing, I kind of leave that to other people."

The last time Tulane hosted a college football game in which both teams were ranked in the AP Top 25 was in 1949, the same year Joe DiMaggio's New York Yankees and Ted Williams' Boston Red Sox were engaged in an American League pennant race so compelling that the late author David Halberstam wrote a book about it ("Summer of '49").

Back then, Tulane was a member of the Southeastern Conference, ranked 10th and lost to No. 13 LSU in old Tulane Stadium, an 80,000-seat oval in virtually the same part of campus where Tulane's more intimate Yulman Stadium stands.

“This is a big one,” UCF coach Gus Malzan said. “This is the type of game that you look forward to. ... We’re playing one of the better teams in the country at their home place.”

In 2014, Tulane brought football from the Superdome back to its campus in New Orleans' largely residential Uptown neighborhood, known for streets lined with massive, old live oak trees and stately homes. The move improved the tailgating scene, but success on the field was more elusive — until now.

Two weeks ago at homecoming, Tulane beat Memphis in front of a record crowd of just more than 30,000. They're anticipating a similar turnout this weekend.

“It’s really cool to be able to host a game like that,” Tulane junior quarterback Michael Pratt said. “All the work we’ve done has paid off. Now we’re going to play a great opponent and showcase what we can do.”

“It’s so impressive, when you watch them on film, their run fits, how hard they play,” Malzahn said of Tulane's defense. “They are really good tacklers. They cover well, too.”

“Big guys who can move,” is how Fritz described UCF's defensive line, which features end Josh Celiscar (6-foot-4, 265 pounds) and edge rusher Tre’mon Morris-Brash (6-2, 245). The pair have combined for seven sacks and 15 1/2 tackles for losses.

UCF is allowing about 119 yards rushing per game. Tulane has been gaining just more than 180.

Tulane's offense, led by Pratt and running back Tyjae Spears, is averaging 418.7 yards and 32.9 points per game, but the Green Wave might find increasing resistance as they approach UCF's end zone. The Knights lead the nation in red-zone defense. Of 36 opponent drives inside the UCF 20-yard line, just 12 have ended with touchdowns. UCF opponents have failed to score any points on 14 of 36 red zone possessions.

A season ago, Tulane football was displaced by Hurricane Ida and played in Birmingham, Alabama, for the first month of the season. The team wound up going 2-10.

“There were just a lot of exterior factors," Pratt said. “We just couldn’t get things to click.”

A symbol of the Wave's dramatic turnaround has a quintessentially local flavor. On Tuesdays after wins, they get New Orleans-style snowballs, made of finely shaved ice flavored with sweet and sometimes creamy flavors including raspberry, cherry, wedding cake or, Pratt's favorite, nectar cream.

“It's a little extra motivation,” Pratt said. “It represents a win. So, when we come out here on Tuesdays and they tell us we've got snowballs, it's exciting for the whole team.”