Hold your breath: Big 12 games keep coming down to the wire 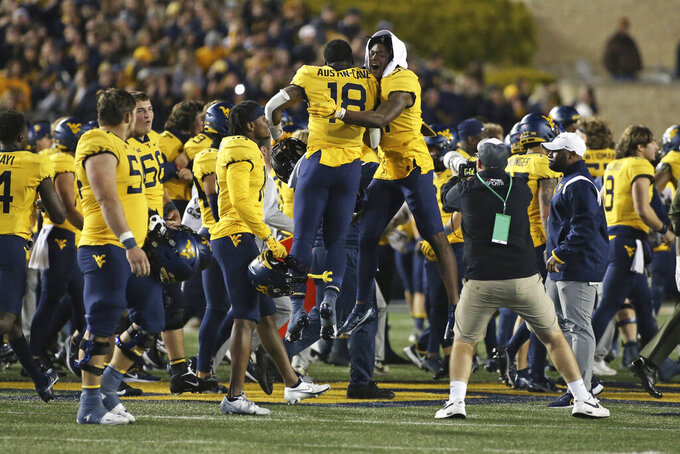 None of them good.

There was the conference opener against Baylor, when a failed onside kick kept the Cyclones from having a chance in a 31-24 loss. The game at Kansas, when Jace Gilbert missed a 37-yard field goal try with 27 seconds to go in a 14-11 defeat. Against Kansas State, the Cyclones failed on fourth down near midfield with 2 minutes left in a 10-9 loss. And last week against Texas, when they fumbled away the ball with 2:06 left in a 24-21 defeat.

That's four losses, all by one possession. Fourteen total points.

The Cyclones shouldn't feel particularly snake-bit, either. Kansas State and TCU, who play Saturday in a matchup of the only unbeatens in league play, are also the only Big 12 teams yet to lose a conference game by a single possession.

In fact, three of them did just last week.

On Thursday night in Morgantown, West Virginia answered a tying 44-yard field goal by Baylor's John Mayers when Casey Legg connected from 22 yards with 33 seconds left to give the Mountaineers a heart-stopping 43-40 victory.

“Any time you win some close games, it helps,” said Mountaineers coach Neal Brown, who was on the hot seat after an 0-2 start but whose team has won three of four. “For us, I hope it sets us up for a stretch run.”

In Austin, Texas answered a touchdown by the Cyclones' Hunter Dekkers with Bijan Robinson's score with 4:43 to go. And when they forced Dekkers' turnover at the Longhorns 32, they had their 24-21 win.

“We needed this game right here," Robinson said, "and not every game has to be pretty.”

In Stillwater, TCU rallied with two fourth-quarter touchdowns to force overtime with Oklahoma State, then pulled off the 43-40 victory when Kendre Miller reached the end zone in the second overtime.

“I think it shows the culture of this team, the mindset we have — never doubting ourselves, never panicking, always staying, always believing in each other, believing in our coaches," Horned Frogs quarterback Max Duggan said. “We could have given up. We could have said, ‘All right, game’s over. They're up there. They're starting to pull away.' Our guys kept fighting and kept on making plays. We know it wasn’t pretty, but we found a way. That’s all that matters right now, finding a way to win.”

Especially in the closing minutes of games.

There have been 17 games in the Big 12 this season and 12 have decided by 10 points or fewer, including the other game Saturday, when Oklahoma beat Kansas 52-42 in Norman. One of the other five was decided by 11 points, and another was the Jayhawks' overtime win over West Virginia, when a pick-six created a 55-42 final score.

Nine games have been decided by one possession. Three have headed to overtime; only Big 12 game went to OT all last season. The average margin of victory is 11.1 points, the closest among the Power Five conferences.

And to think: The Big 12 won't even push past the halfway point for two more weeks.

What might be even more astounding is that mighty Oklahoma, which has won six of the past seven Big 12 championships, is responsible for the two most lopsided games this season — and both were losses. The Sooners were routed 55-24 by TCU, when they lost quarterback Dillon Gabriel to an injury, then were blown out 49-0 by Texas without him.

Meanwhile, the No. 8 Horned Frogs and No. 17 Wildcats have been able to survive and advance.

TCU's past two conference wins have been one-possession affairs, a 38-31 win over the Jayhawks and its double-overtime thriller against Oklahoma State. And all three of the Wildcats' conference games have been decided by 10 points or fewer, a including a back-and-forth 41-31 win over Oklahoma, a 37-28 win over Texas Tech and that 10-9 win over the Cyclones.

“All our goals are still on the horizon,” Kansas State quarterback Adrian Martinez said. “The Big 12, it's what it's about. It's a one-week season every week, and we've found a way to get it done.”