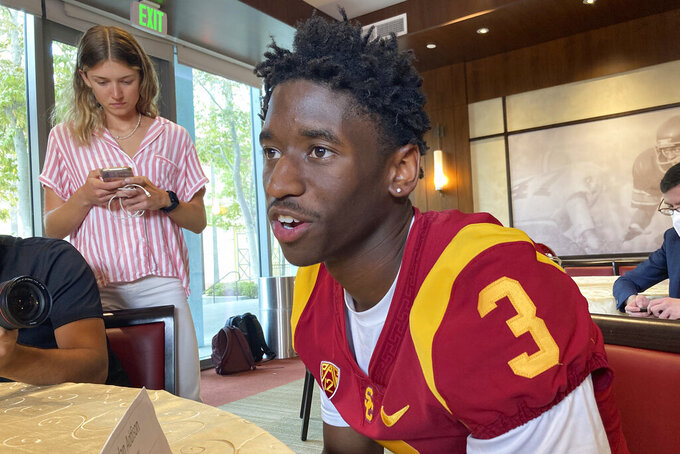 Southern California receiver Jordan Addison speaks with reporters on the school's campus in Los Angeles on Thursday, Aug. 4, 2022. Addison won the Biletnikoff Award as the nation's top receiver last season at Pitt before his high-profile transfer to the Trojans. (AP Photo/Greg Beacham) 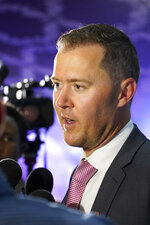 LOS ANGELES (AP) — From Hollywood to the sports world, everybody loves a comeback story.

That's why Southern California's remarkable football rebirth is attracting so much attention. It's why a team that finished 4-8 last season and then added dozens of new players this summer is No. 14 in the AP Top 25 even before the Trojans have played a down under new head coach Lincoln Riley.

USC is a traditional college football powerhouse with the championship banners to prove it, and the Trojans are the West Coast's biggest, most compelling program when they're at their peak. But they haven't been there arguably since 2008, the year before Pete Carroll interrupted USC's renaissance by leaving for the Seattle Seahawks ahead of heavy NCAA sanctions.

The ensuing seasons have featured several high points, but they were submerged in losing, off-the-field turmoil and simmering frustration for the school's large, opinionated fan base. For the first time since Carroll departed, the Trojans appear to have everything in place to return to sustained contention for Pac-12 conference titles — albeit two seasons before changing conferences to the Big Ten — and national championships.

The weight of USC's history doesn't yet hang heavily on Riley or his players. After more than a decade of false starts and detours, the Trojans are pointed forward again, with the school's vast financial resources and a football-friendly leadership structure determined to return them to prominence.

“I’m starting off new, and they’re starting off new as well,” said receiver Jordan Addison, who joined the Trojans after winning the Biletnikoff Award at Pitt last season. “If you actually think about it, I wouldn’t say it’s harder. I feel like it’s easier, because we’re all in the new stage, and we’re all trying to prove ourselves. It’s definitely a challenge, but everybody wants to come in here and win, so that’s always going to be the mindset.”

Not many four-win programs can attract a coach who led his last school to three College Football Playoff appearances and coached two Heisman Trophy-winning quarterbacks, along with many other NFL players. The Trojans paid top dollar to lure Riley from Oklahoma, but the 38-year-old coach clearly was eager for a new professional challenge in a new environment as well.

Riley is off to a strong start in Los Angeles, getting love from USC's big base of prominent former players while charming boosters and educators alike — and even throwing out the first pitch at a Dodgers game. More importantly, players emerged from his spring practices and the first two weeks of training camp energized about their future.

Addison and ex-Oklahoma quarterback Caleb Williams are the headliners in the group of 24 veteran transfers from across the nation. The players were attracted to USC by the opportunity to do something big at a major school that's starting over. Riley's recruiting pitches repeatedly landed players who understand the chance they have in LA.

“They brought not only good players, but good guys in the locker room,” offensive lineman Jonah Monheim said. “It’s a lot easier to get closer to someone and work hard with someone when you know they’re right there with you doing the same type of stuff.”

USC landed a deep array of skill-position talent, and the best way to make a huge one-season turnaround seems for Riley's offense to score a ton of points — particularly since the defense under coordinator Alex Grinch will need a season or two longer to build an elite talent base.

Williams has already made a splash in Los Angeles with both his leadership and his business acumen in landing NIL deals in the nation's second-largest media market. He will throw to Addison along with Oklahoma transfer Mario Williams, Washington transfer Terrell Bynum, Colorado transfer Brenden Rice and returning wideouts Gary Bryant, Kyle Ford and Tahj Washington.

Riley has a very manageable slate for his first season. The Trojans' only nonconference road trip is for its traditional rivalry game with Notre Dame, and USC doesn't have to play Oregon or Washington. A trip to defending Pac-12 champion Utah looms on Oct. 15, presenting a potential reality-check moment if the Trojans manage to get off to a strong start.