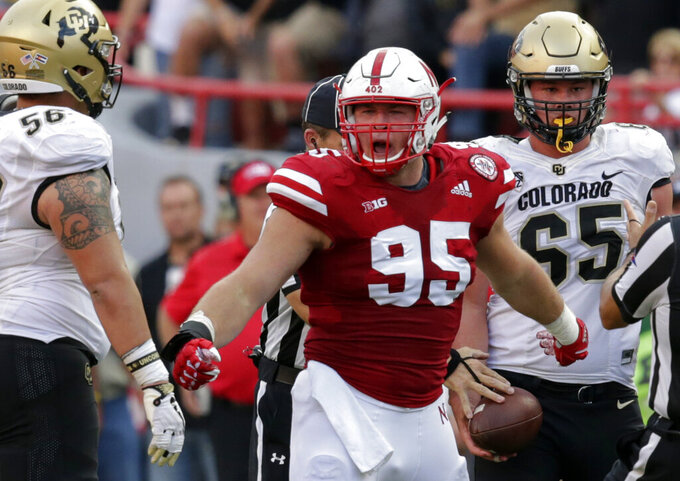 FILE- In this Sept. 8, 2018, file photo, Nebraska defensive lineman Ben Stille (95) celebrates a sack of Colorado quarterback Steven Montez during the second half of an NCAA college football game in Lincoln, Neb. The Nebraska defense is counting on Stille and his linemates as the 24th-ranked Cornhuskers try to rebound from a 4-8 record last year. (AP Photo/Nati Harnik, File)

LINCOLN, Neb. (AP) — Ben Stille was born in 1997, the year Nebraska won its most recent national championship, and he grew up a half-hour from Memorial Stadium.

His earliest football memory — sitting in the rain wrapped in a giant black trash bag watching the Cornhuskers beat Nicholls State in 2006 — came during the Bill Callahan era, which most fans would rather forget.

Stille was 2 years old when Nebraska won its most recent conference title, so all he knows about the program's rich history comes from old videos, books and stories he's heard from relatives and friends.

With the program showing signs of taking off under second-year coach Scott Frost, the junior from Ashland might be playing for 24th-ranked Nebraska at the right time.

"It means a little more to me than a lot of guys, just seeing the rise and the fall of the program and kind of being around for all of it," Stille said Monday. "And being a part of bringing it back means the world to me."

The Huskers are picked by the media to win the Big Ten West after going 4-8 last year. If the Huskers meet the high expectations, it probably will be in large part because of Stille and his mates on the defensive line.

The line figures to be the strength of the defense, which by all accounts has been much improved in preseason practices compared with the unit that ranked near the bottom in nearly all the categories in the Big Ten.

Stille averaged five tackles to lead Nebraska linemen. He and twin brothers Carlos and Khalil Davis are back, and another returnee, Damion Daniels, is joined by older brother and graduate transfer Darrion Daniels. Junior college transfer Jahkeem Green arrived last week and is expected to be a contributor. Three or four other linemen also are in line to play.

Depth was not a luxury the Huskers had last year when they allowed more than 200 yards per game rushing against conference opponents for a second straight year. In league play, only six Power Five conference teams gave up more than the 5.6 yards per carry the Huskers allowed against nine Big Ten foes.

"I think early in the year we lacked a lot of confidence," Stille said. "We gained confidence (but) toward the end of the year a couple of those games it felt we were getting pushed around. We knew there was a lot of room for improvement."

The Huskers have fewer proven players at linebacker and in the secondary. Mohamed Barry is an honors candidate at inside linebacker, and outside linebacker Alex Davis appears to have elevated his game. Lamar Jackson and Dicaprio Bottle are the only cornerbacks with starting experience, and Eric Lee Jr., Marquel Dismuke and Deontai Williams have fewer than 10 combined starts at the two safety spots.

One of the most dynamic players is Cam Taylor, who could play cornerback, safety or even outside linebacker.

"Having a guy like him that knows the whole defense and every position and is physical enough to play down low and is good enough on the edge to play coverage is pretty exceptional," defensive coordinator Erik Chinander said.

In addition to shutting down the run, the Huskers also are looking for more takeaways and to get off the field quicker. The Huskers had 20 takeaways, tied for ninth in the Big Ten and 57th nationally. The defense had more than two three-and-outs in just three conference games.

"We definitely didn't feel good after last year," Jackson said. "At the same time, we played better football toward the end. Still, nobody is satisfied. We went 4-8. That's still a losing season. We were home for bowl season and all that good stuff. That's all stuff we kind of regret and have a taste for. We have to play better against every team, try to impose our will. That's what we plan to do."

This version corrects Mohamed Barry's position to inside linebacker.