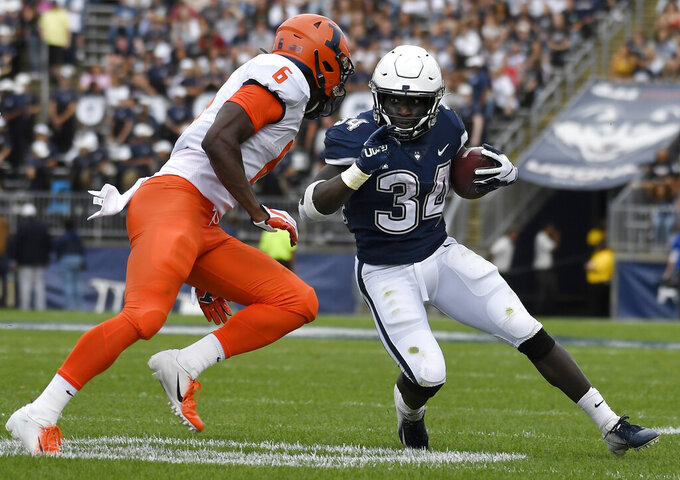 Connecticut running back Kevin Mensah (34) is pursued by Illinois defensive back Tony Adams (6) during the first half of an NCAA college football game, Saturday, Sept. 7, 2019, in East Hartford, Conn. (AP Photo/Jessica Hill)

Indiana coach Tom Allen heads into Saturday's game with some of the same concerns he had last week.

So after another week of problem-solving, Allen expects to see changes Saturday against UConn — regardless of who starts at quarterback.

"We'll do some things with him, in terms of evaluation that will help us a lot to get a good gauge," Allen said Thursday when asked about Penix. "Don't know exactly what the status is for Saturday yet, but we should know more here relatively soon."

Allen considers Penix the long-term future of Indiana football, a dual threat capable of challenging defenses with a strong arm and fleet feet. But he suffered an undisclosed injury in practice last week and missed the Hoosiers' 51-10 loss to No. 6 Ohio State.

Peyton Ramsey , meanwhile, started 16 games over the previous two seasons and played well in relief of Penix in a blowout win over Eastern Illinois before putting up pedestrian numbers against the Buckeyes, in part because of the struggling rushing attack.

Everybody expects to see a better overall performance this week.

"Peyton's got a lot of snaps under his belt in this program and he's done some great things," first-year offensive coordinator Kalen DeBoer said. "I didn't get one response one way or the other (last week) when they felt and knew Mike wasn't going to play for us, and I would expect that to be the case again this week if that happens."

The Huskies (1-1) have lost 17 straight against Football Bowl Subdivision opponents since last beating Tulsa on Oct. 21, 2017, and, like the Hoosiers, were forced to change quarterbacks because of an injury.

Mike Beaudry won the job in camp, started UConn's season-opening win over Wagner and then suffered an undisclosed injury during the game.

Coach Randy Edsall went with freshman Jack Zergiotis in a Week 2 loss to Illinois, then decided to make the change permanent. Now, after a bye week, Edsall hopes to see progress — and the end of the losing streak.

"I think the bye was good for us," Edsall said. "With the change we had at quarterback, it gave us another week to help Jack get better. Plus, it gave us a chance to continue to work on the fundamentals and technique, but also to get better at the things we know we can do well."

While the Huskies have won the only two meetings in this series, they've struggled against the Big Ten and in non-conference play.

Connecticut has lost seven of its last 10 overall outside the American Athletic Conference and is 14-27 all-time against Big Ten foes, including the 31-23 loss to Illinois.

Indiana, meanwhile, has won 16 of its last 17 in non-league play.

Indiana tight end Peyton Hendershot has become a favorite target for Penix, Ramsey and Donovan Hale, the receiver who connected with Hendershot for a 49-yard TD pass last week.

Hendershot has taken full advantage of his opportunities, too.

Getting Zergiotis some extra practice wasn't the only thing Edsall worked on the last two weeks.

He knows the Huskies need to reduce their turnovers after committing five in the first two weeks, especially against a Hoosiers team that has forced at least one in 20 of their last 21 games.

Another problem: Conn averages 2.7 yards per carry, the 10th-lowest in the FBS. Playing Indiana could help. The Hoosiers allowed 306 yards last week and are giving up 155.3 yards per game.