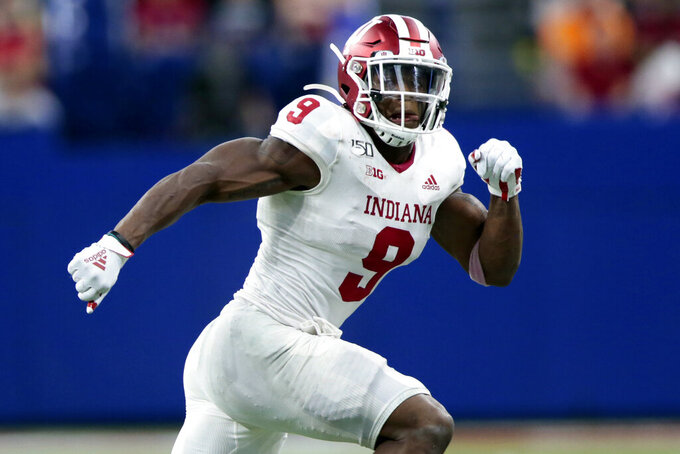 INDIANAPOLIS (AP) — Marcelino Ball provided a physical presence in Indiana ' secondary from the moment he first stepped on the field in 2016.

Now coach Tom Allen is looking for a replacement.

Allen announced Monday that the fifth-year senior tore an anterior cruciate ligament during workouts last week and will miss the entire season.

“I hate that for him," Allen said. “He has been such a great player for us and has really matured so much as a young man. He will handle it the right way, but he will not be able to play this season."

Ball came to Indiana in 2016 with aspirations of following two of his three older brothers into the NFL. He found a perfect fit in Allen's defense playing husky — part linebacker, part safety — and made an immediate impact. He finished third on the team and led all Big Ten freshmen with 75 tackles, finishing third in the nation among freshmen with 60 solos.

But three games into his sophomore season, Ball suffered a left knee injury that forced him to miss the final nine games. He returned in 2018, finishing with 59 tackles and then recorded 47 tackles and two sacks for the bowl-bound Hoosiers last season.

He graduated in May and was expected to be one of the defensive leaders again this season.

Instead, junior Bryant Fitzgerald is expected to start in place of the 6-foot, 220-pound Ball when Penn State visits Indiana for the Oct. 24 season opener.

Fitzgerald has his own impressive resume. He led the Hoosiers with three interceptions as a redshirt freshman in 2018 and had 27 tackles and three pass breakups last season.

“We feel like we have the depth to be able to rotate a couple of different guys, but right now it is going to be Bryant as the No. 1 guy at that spot and training D.K. Bonhomme to be his backup," Allen said.

The Hoosiers increased their workload from 12 hours per week to 20 hours shortly after the Big Ten decied Sept. 16 to play a nine-game, conference-only season this fall.

Indiana is scheduled to be in shoulder pads and helmets for Tuesday's practice and is expected to resume full-pad workouts Wednesday.

Allen also said the program has conducted approximately 1,200 COVID-19 rapid tests over the past 11 days and had one positive. The person who tested positive, Allen said, was neither a player nor a full-time staff member.