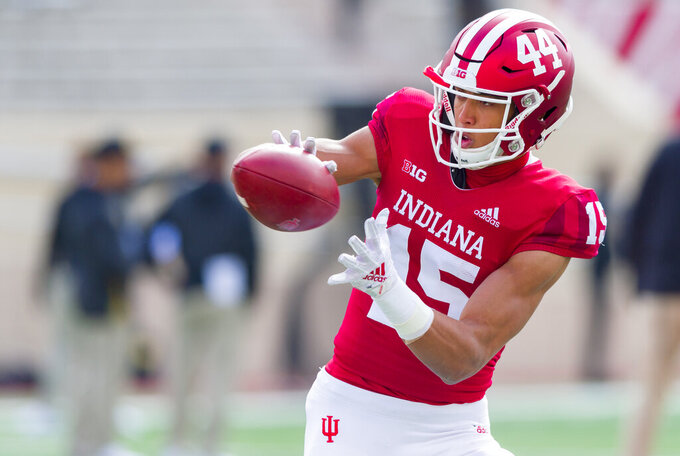 FILE - In this Saturday, Oct. 13, 2018, file photo, Indiana wide receiver Nick Westbrook (15) warms up before an NCAA college football game in Bloomington, Ind. Westbrook senses this season will be different at Indiana. He hears coaches debating how to use their suddenly deep roster. He sees players holding teammates accountable and brimming with confidence. (AP Photo/Doug McSchooler, File)

He hears coaches debating how to use their suddenly deep roster. He sees players holding teammates accountable and brimming with confidence.

The fifth-year senior figures it's about time the Hoosiers develop a knockout punch.

"I think in the past we've had a couple of good games or good series here or there but we need to put our foot on the gas and close it out when we have a team on the ropes," he said. "We have to score that touchdown or pick up that first down or get a touchdown in the red zone instead of a field goal — whatever we have to do to put the game away."

Hoosiers fans have spent years hoping the program could turn those types of words into consistent results. Each of the past two seasons, Indiana fell one win short of bowl eligibility, the latest chapters in a frustrating nearly three-decades long trend. Since the school's last bowl victory in 1991, the Hoosiers have earned just four bowl bids and they haven't been ranked in the Top 25 in almost a quarter-century.

Even last season's one-word message from coach Tom Allen — finish — didn't work. After starting 4-1, the Hoosiers lost six of their final seven games, including four where fourth-quarter comebacks petered out.

So why does Indiana believe things will turn around this fall? Experience, size, speed and a new attitude.

"When I walk into the stadium, I feel the energy and I feel the vibe," linebacker Raekwon Jones said. "I think this team is locked in and these players want to win games and rewrite history."

But the Hoosiers believe they've finally found a combination that will help them feast on success.

"We know we shouldn't be falling short to some of these teams, so we're going to use it as motivation to close out these games," receiver Whop Philyor said. ""We know where we are as a team and we're going to get over the hump."

Allen's biggest decision will be choosing a quarterback. Peyton Ramsey has made 16 starts over the last two seasons and will be seriously challenged by redshirt freshman Michael Penix Jr., who is coming back from a torn anterior cruciate ligament, and Jack Tuttle, who transferred from Utah. Allen will make his choice based on a simple calculation.

"When it's 1:20 to go in the game and we've got the ball, who do our guys believe is going to take us down the field and go score and go win the game?" Allen said. "If that guy is in the huddle leading our offense, then we've got a chance to win."

Junior defensive back Marcelino Ball changed his number this season to honor Jonathan Crawford, a close friend who graduated after last season. But Ball also wants his new number to become a part of the Hoosiers' tradition.

"I'm trying to start a legacy with No. 9 here," Ball said. "Kind of like what they have at LSU with No. 7, where the best player in the secondary wears No. 7. I want that here, too."

One year after school officials decided to remove the players' names on the back of their jerseys to conform with the basketball team's tradition, they have reversed course. Philyor is one of many who says he is thrilled to have the names back — even though he considers the name on the front to be of greater importance.

The Hoosiers need another fast start to make the postseason. They open Aug. 31 against Ball State at Lucas Oil Stadium in Indianapolis, then host Eastern Illinois, Ohio State and Connecticut before heading to Michigan State. The final month is brutal: After hosting Northwestern on Nov. 2, they visit Penn State on Nov. 16, welcome Michigan on Nov. 23 and then travel to Purdue on Nov. 30.