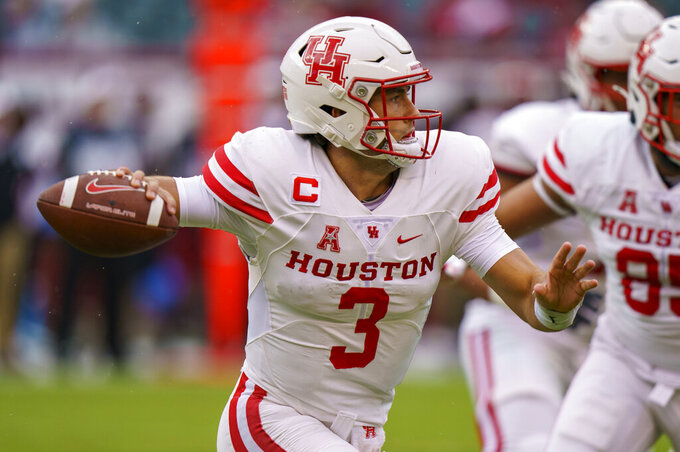 Houston quarterback Clayton Tune (3) looks to throw a pass during the first half of an NCAA college football against Temple, Saturday, Nov. 13, 2021, in Philadelphia. (AP Photo/Chris Szagola) 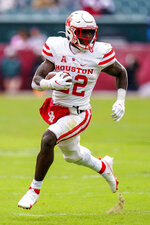 PHILADELPHIA (AP) — Alton McCaskill rushed for 129 yards and two touchdowns as No. 17 Houston methodically dispatched Temple 37-8 on Saturday to clinch a berth in the American Athletic Conference championship game.

The Cougars (9-1, 7-0 American Athletic) have won nine straight games since an opening loss to Texas Tech to secure their first appearance in the conference championship game since winning the American Athletic in 2015. They will likely face No. 2 Cincinnati, which has to win one of its remaining two games — at home against SMU next Saturday and at East Carolina on Nov. 26, to join them in the Dec. 4 championship game.

“Make no mistake, I’m proud of where we are at,” Houston coach Dana Holgorsen said. “That’s a goal before the season started. We wanted to be in the title game and we are. But it doesn’t change what our job is next week (in the home finale against Memphis) or in two weeks (at UConn in the regular season finale).”

“Our defense, I thought played well enough to win,” Temple coach Rod Carey said. “Our offense put us in some bad positions today.”

The Houston defense, which had been blistered for 79 points in back-to-back wins over SMU and USF, got interceptions from cornerback Marcus Jones, safety Gervarrius Owens, and Gleson Sprewell while holding the Temple offense to just 10 first downs and 48 total plays in the game.

“The message hasn’t changed the last two years,” junior linebacker Donavan Mutin said. “We just didn’t get the result the last two years, but the message hasn’t changed. Now that we’ve won nine straight, that’s what is supposed to happen. Everyone expects this. Everyone knows we’re this good. This is what is supposed to happen, this is what we all sacrificed for and now everyone is getting to see the results.”

The Cougars offense was able to wear down the Owls in the second half after struggling to maintain momentum in building a 10-0 first-half lead. Running back Ta'Zhawn Henry capped the first drive of the second half with an 8-yard touchdown run. Five minutes and two drives later, McCaskill broke free for a 34-yard score, his second of the afternoon.

McCaskill now has 14 rushing touchdowns this season- the most by a freshman running back in Cougars program history.

“He’s a great player and an explosive athlete,” Houston quarterback Clayton Tune said. “It makes my job easier when he can break off runs and break tackles the way he does. I’m excited for him.”

The Cougars rushed for 217 yards, the sixth team and fifth in a row that Temple has allowed more than 200 yards rushing.

Tune was 20 of 33 for 210 yards and threw touchdown passes to Seth Green and Jaylen Erwin. Tune has not thrown an interception in his last five games.

“He's 18,” Carey said about Lynch. “This was his third start as a true freshman. We have to keep working with him to get through those nerves earlier and get the experience.”

Holgorsen said that KeSean Carter, who was the Cougars' second receiving option behind Nathaniel Dell, was lost for the season with a foot injury suffered at the end of the USF win last week.

“I'm not the type of guy that is going to talk about injuries,” Holgorsen said. “But it is a long-term thing.”

With Carter's injury, Holgorsen decided to incorporate tight ends Christian Trahan and Seth Green into the offense. Green had six catches for 60 yards and a touchdown. Trahan had three catches for 35 yards.

Houston: The Cougars are likely to be judged solely by how they look in the American title game against Cincinnati. They will face a tough home test against Memphis next week but likely will have their postseason destination determined by how they fare against the Bearcats in the title game.

Temple: The Owls continue to struggle on both sides of the ball and never could take advantage of Houston's sluggishness in the first half. Saturday did nothing to quell speculation about third-year head coach Rod Carey's status with the program moving forward.

At the very least, Houston will likely hold in the middle of the Top 25 discussion in this week's poll with a possibility of moving up a spot or two, but the Cougars have yet to break into the College Football Playoff rankings.