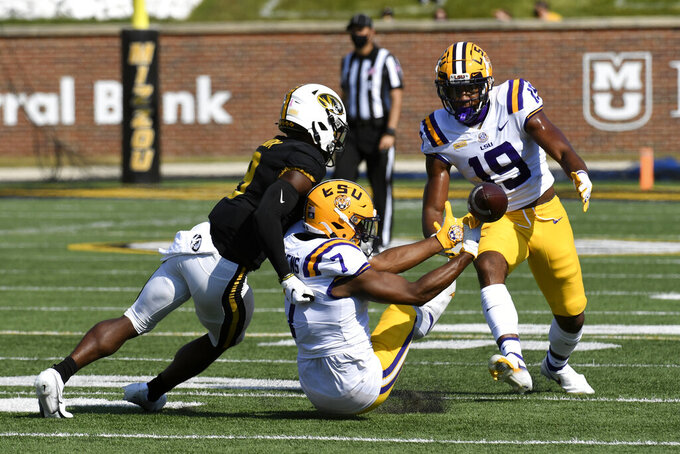 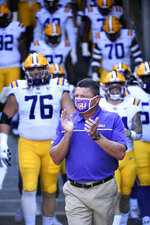 BATON ROUGE, La. (AP) — LSU coach Ed Orgeron was grateful for an extra week to help the Tigers confront considerable challenges on both sides of the ball.

He’ll have to hope that’s enough time for the unranked Tigers (1-2, 1-2 SEC) to turn back South Carolina (2-2, 2-2), which is riding high after its first victory over Auburn in nearly a century.

“Our players were tired, our players were beat up. They needed the time off,” Orgeron said, referring to last weekend’s postponement of a game at Florida because of a COVID-19 outbreak among the Gators. “We had two extra days on South Carolina, so we should be ahead.”

Not only did LSU’s defense look in disarray the last time it took the field in a 45-41 loss at Missouri, but starting quarterback Myles Brennan came away from the loss with an abdomen injury that would have prevented him from playing in the Swamp last weekend and will sideline him this weekend, Orgeron said.

“The team loves both of those guys. It was a very close battle,” Orgeron said. “I told Max I want to play him, but it all depends on the flow of the game. ... I just want to give both a chance.”

The Gamecocks will enter LSU’s Death Valley on the heels of a 30-22 triumph last Saturday that marked South Carolina’s first victory over Auburn since 1933.

“Auburn was a good team that happened to be ranked 15th in the country. Hadn’t beaten them in a while,” said South Carolina QB Collin Hill, a Colorado State graduate transfer who has passed for about 210.5 yards per game and helped the Gamecocks average 30.5 points. “That definitely gave us a boost.”

“Obviously, they do have talent that can make plays,” he added. “But so do we.”

Orgeron said that his two freshman QBs both have looked “very impressive” while splitting first-team snaps in practice, which is why he wants to see both play Saturday night.

“I believe both of those guys have NFL talent,” Orgeron said.

“Just because TJs starting right now doesn't mean Max isn't going to do a better job," Orgeron said. "If Max does a better job and Myles Brennan is hurt next week, he's going to start. It's all about competition.”

South Carolina coach Will Muschamp said his staff has gone through available high school footage to familiarize themselves with the two LSU freshman signal callers.

“Both guys can really spin it,” Muschamp said. “They both have athleticism to extend plays and to create some things in the run game.”

Adam Prentice, a graduate transfer from Colorado State, is happy to play fullback — and to see more and more NFL teams utilizing the position in their offenses. The 6-foot, 205 Prentice had his biggest impact so far in the Gamecocks’ upset over then-No. 15 Auburn last week, named the team’s player of the week. “We’re probably one of the few places in the country where that happens,” Gamecocks coach Will Muschamp said.

Orgeron said attempts to fix the defense began with simplifying calls and assignments for a unit made up mostly of young and new starters – never mind that even the veterans have had to learn new coordinator Bo Pellini’s scheme.

“We did a lot of soul searching on what we tell the guys, how we tell them,” Orgeron said. “It’s not how much we know; it’s how much they know.”

Meanwhile, LSU defensive players say they’re determined to perform in a way that reflects better on the staff.

“We know there are a lot of naysayers out there, a lot of people kicking us while we’re down,” linebacker Jabril Cox said. “We’ve taken that amongst ourselves this week to go ahead and show that coach Bo, he’s a great coach and the scheme and everything that he has really works.”

South Carolina left tackle Jazston Turnetine is an imposing guy at 6-7, 330 pounds. He was a huge reason the Gamecocks were able to gain 153 yards on the ground in their 30-22 victory over Auburn. Turnetine, who was a JUCO standout the last two years, acknowledge he got in the way of his development at times this camp instead of simply trusting coaching. But he’s advanced enough to gain the starting lineup. “He’s a big guy,” quarterback Collin Hill said. “Glad to have him on the blindside there for sure.”