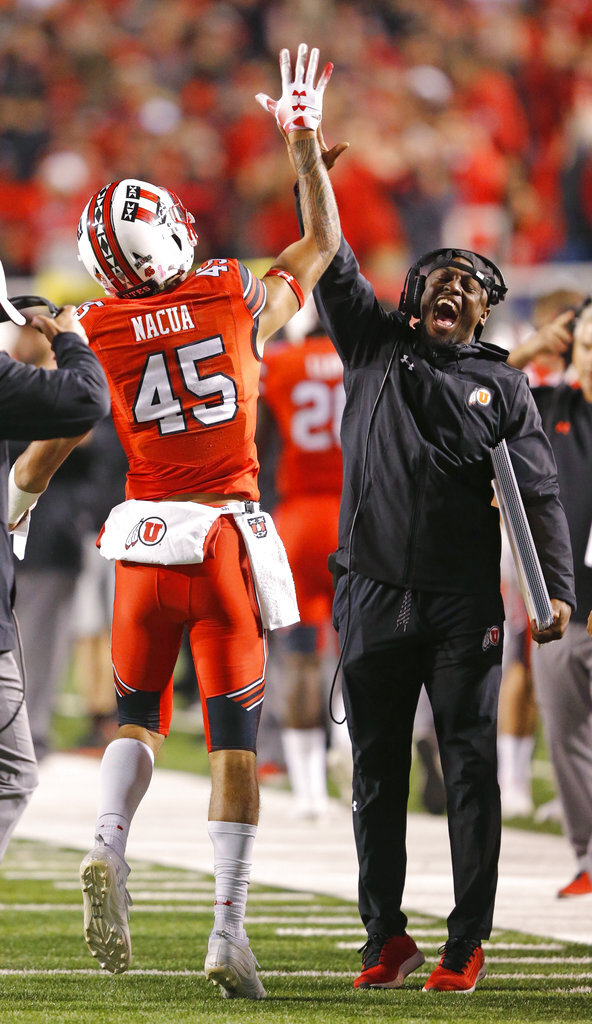 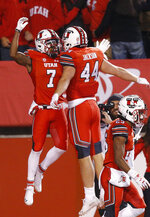 "Man, that was pretty tight," Huntley said with a wide grin after he threw for two touchdowns, ran for another and caught a 58-yard TD pass, leading Utah past Arizona 42-10 on Friday night.

In an effort to keep Huntley healthy, Utah coaches talked all fall camp about limiting his hits and making him more of a passer. After losses to Washington and Washington State where the Utah offense sputtered, the Utes committed to the running game and has let Huntley freelance again with his legs and arm.

On a play that typified the game, Huntley handed the ball to Zack Moss, who tossed it to Britain Covey coming the other direction. Covey, a title-winning high school quarterback who is now Utah's leading receiver, threw a perfect spiral to Huntley for 58-yard touchdown.

In postgame interviews, Huntley made sure everyone knew there was no quarterback controversy with Covey.

"I'm definitely quarterback and that isn't even a question," Huntley said after his triple-threat performance.

Chase Hansen sacked Khalil Tate by the ankle late in the first quarter and the Wildcats' QB was visibly limping after that point. Jamarye Joiner replaced Tate for two series before giving way to Rhett Rodriguez, who threw for 226 yards and a 42-yard fourth-quarter touchdown to Cedric Peterson for Arizona (3-4, 2-2).

"Running was out of the question and even dropping back and handing it off (was hard)," Arizona coach Kevin Sumlin said about Tate. "I saw a player that could barely move, so we had to make a change."

Huntley, who went 14 of 19 for 201 yards, lobbed a pass to Samson Nacua for an 8-yard touchdown that capped a 15-play, 75-yard opening drive, marking the longest possession of the season for Utah.

"We've talked a lot about starting fast and starting physical. I think we've really found an identity as a team and it's obvious to see," Covey said.

In addition to 64 yards rushing, Huntley completed his longest pass of the season (68 yards) down the right sideline to Demari Simpkins in stride for the Utes' third touchdown.

Utah's balanced attack produced 230 yards rushing to compliment 265 yards through the air. Meanwhile, Arizona was held to 72 yards on the ground, 130 under its average, as the Wildcats became one-dimensional.

Before leaving the game in the first quarter, Tate was 1-of-4 passing for three yards and had just three yards rushing. Pegged as a Heisman Trophy hopeful, Tate has been dealing with a sprained left ankle since the second game of the season at Houston. After running for 1,411 yards last season, Tate has been held to 112 yards rushing in seven games.

TOO MUCH OF A KILLER INSTINCT?

Despite leading 35-10 in the fourth quarter, Mitch Wishnowsky faked a punt and ran 28 yards for a first down. Utah coach Kyle Whittingham has said several times this season that the Australian punter has the green light to run anytime he sees an opening. Thomas Reid III got a personal foul on the tackle and there was pushing and shoving between the frustrated Wildcats and the jubilant Utes along the Arizona sideline. "That wasn't a called play," Whittingham said. "It's just part of our rugby punt package."

Arizona: Already misfiring on offense, the Wildcats looked for answers with dual-threat Joiner and backup Rodriguez after Tate left the game. Neither had much success until the fourth quarter. ... The Wildcats fell fast and far after winning three of four, including a close loss to USC. The 10 points is their lowest mark since losing 69-7 to Washington State in 2016.

Utah: Following up on an upset at then-No. 14 Stanford, the Utes now have a powerful and unpredictable offense to complement their top-ranked defense. The Utes controlled both lines of scrimmage and are playing their best ball at the midpoint of their season and are in decent position in the Pac-12 South, even after dropping their first two conference games.