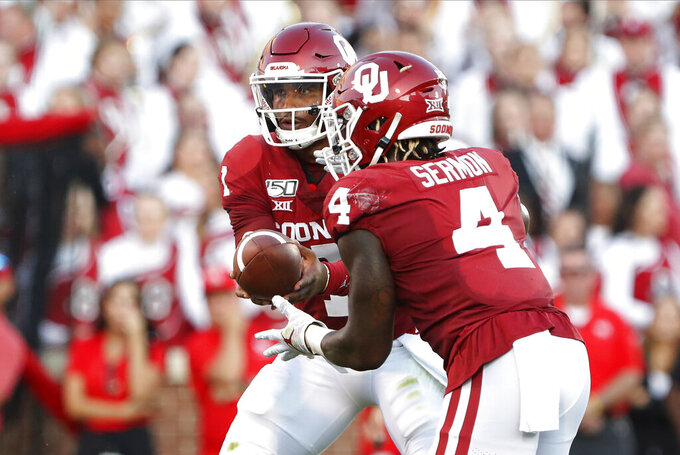 Oklahoma quarterback Jalen Hurts (1) hands the ball off to Oklahoma running back Trey Sermon (4) against Houston during the first half of an NCAA college football game in Norman, Okla., Sunday, Sept. 1, 2019. (AP Photo/Alonzo Adams)

NORMAN, Okla. (AP) — Most of Oklahoma's great running quarterbacks never put up numbers like Jalen Hurts did in his Sooners' debut.

Not even last year's Heisman Trophy winner, Kyler Murray, came close, at least in terms of single-game production. Hurts ran for 176 yards and three touchdowns to help No. 4 Oklahoma defeat Houston 49-31. Only Thomas Lott ever ran for more yards in a game from the quarterback position at Oklahoma than Hurts did in his very first game since transferring from Alabama.

That's a major accomplishment at a program that ran the wishbone for two decades.

"He played with a chip on, and he wants everyone to know he still has it," Oklahoma receiver CeeDee Lamb said.

Lott set the single-game record for an Oklahoma quarterback with 195 yards against Kansas State in 1976. Hurts just edged out Holieway's 170-yard performance against North Carolina in 1987 for second place. Murray never ran for more than 114 yards in a game during his Heisman season.

Hurts' running style is different from many of the quarterbacks who have put up big numbers for the Sooners in the past. He has adequate speed, but at 219 pounds, his best asset is his ability to move the pile. He doesn't think about how he runs and shook his head when asked whether he embraces contact.

It's a mentality Oklahoma coach Lincoln Riley appreciates as the Sooners prepare to host South Dakota on Saturday.

"Several examples the other night where he takes some contact and carries guys three, five, six more yards," Riley said. "And those add up through the course of a game."

Hurts had 128 yards at halftime against Houston, matching the record Holieway set in 1985 for the most yards rushing by a Sooner quarterback in a first half. He also took a lot of hits, something Riley is concerned about.

"He is built a little bit different than some of the guys we've had in the past," Riley said. "He's got a body to be able to withstand some, but at the same time, we don't want him taking a bunch of unnecessary ones, either. That will be an ongoing conversation with Jalen and I, trying to find that kind of middle ground, where he can still be an effective runner, because he is."

It's nothing new for Hurts to put up big rushing numbers. He piled up 1,976 yards and 23 touchdowns rushing in his three-year career at Alabama. But he topped his career rushing high in his first game in Riley's offense. He posted 508 yards of total offense — the fifth-highest total in school history.

"I got out there and try to execute what's called and prepare every day throughout the week," Hurts said. "Game plan's great. Regardless of what it is, we have to execute. That's what I do, that's my intent."