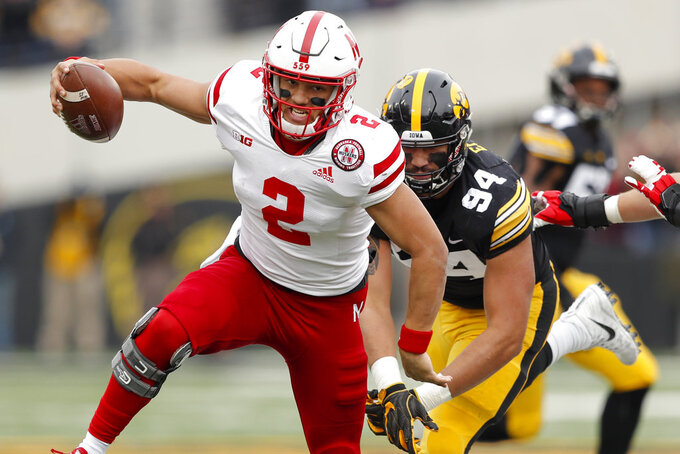 LINCOLN, Neb. (AP) — The growing pains Nebraska went through in its first year under Scott Frost were apparent. There was the program-worst 0-6 start, the seven games in which the defense allowed more than 450 yards and the eight in which it gave up at least 31 points, and there were special-teams breakdowns week after week.

Hope for the future was apparent, too. Freshmen Adrian Martinez at quarterback and Maurice Washington at running back are stars in the making, sophomore JD Spielman was one of the Big Ten's top receivers for a second straight year, and team-wide unity of purpose set in just as Frost promised.

Nebraska went 4-8 for the second season in a row. This 4-8, however, has an entirely different vibe.

"We're good enough to beat about anybody in this league right now when you play really good teams like Iowa and Ohio State on the road and come as close as we came," Frost said. "We aren't that far away, and I know how much better we can get. I'm excited about where this is going."

Few would have seen a bright future two months ago when Nebraska was coming off a 56-10 beatdown at Michigan.

"A lot of you guys were in the room in Michigan when I said that was rock bottom," Frost said. "To our kids' credit, they swam like hell for the surface and have kept improving. It's gotten consistently better."

The Cornhuskers won four of their last six games. The two losses down the stretch were 36-31 to Ohio State and 31-28 to Iowa on Friday on a field goal as time expired.

Martinez has become the face of the program. He set a school record with seven games with 300 yards of total offense, and his 3,246 yards rank fifth on the single-season chart. He completed 65 percent of his passes for 2,617 yards and 17 touchdowns, with eight interceptions, and his 57 rushing yards per game ranked third among Big Ten quarterbacks.

"Whenever you have coach Frost and this offensive staff, I think the sky's the limit," Martinez said. "And obviously we have a lot of guys returning, so it'll be interesting to see what we're capable of next year."

Devine Ozigbo became Nebraska's first 1,000-yard rusher since 2014. He graduates, which will put Washington in position to be the Huskers' featured back. Washington averaged 5.91 yards per carry, had a 100-yard game against Minnesota and showed off his receiving skills with seven catches for 102 yards against Iowa.

Stanley Morgan Jr. became Nebraska's all-time leading receiver , and the first in program history to go over 1,000 yards in a season, and he set a school record with a catch in each of his last 38 games.

Morgan is the Big Ten's third-leading receiver and is followed by teammate Spielman, who caught 66 balls for 818 yards to rank in the top five in the conference for a second year in a row.

Three of five starters on the offensive line will be back, as will tight end Jack Stoll and a host of other young receivers.

Nebraska will return the core of its front seven on defense. That includes linebacker Mohamed Barry, who made 112 tackles, and defensive end Ben Stille, who had five sacks.

The Huskers ranked near the bottom of the Big Ten in the major defensive categories, but Frost expects improvement in year two in coordinator Erik Chinander's 3-4 system and in Zach Duval's strength and conditioning program. Depth is needed, especially in the secondary, and those needs will be addressed in player development and recruiting.

"This was a trying year for us," Frost said. "I think if we could start the year over with the team where it is right now, I don't know how many wins there would be but it would be a fun ride. It just wasn't there at the beginning of the season.