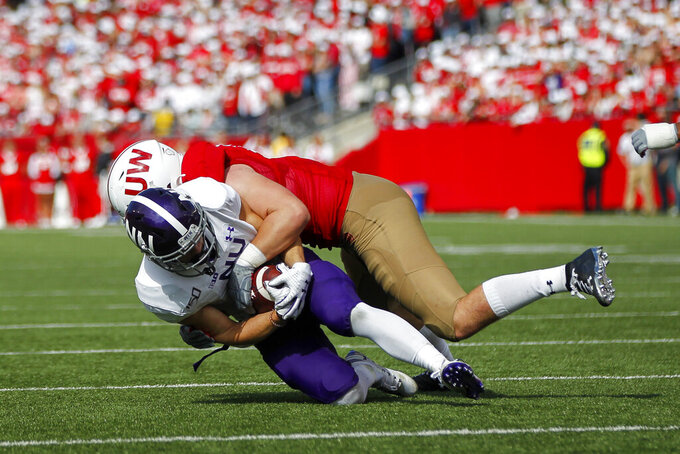 LINCOLN, Neb. (AP) — Once again, Nebraska will try to bounce back from a humiliating loss.

The Cornhuskers (3-2, 1-1 Big Ten) enter their game against Northwestern (1-3, 0-2) on Saturday off a 41-point beat-down at home by Ohio State. Last year, there was the 46-point road loss at Michigan, and the final two seasons under Mike Riley saw Nebraska lose five games by 30 or more points.

Coach Scott Frost, who returned to his alma mater after leading Central Florida to a 13-0 season in 2017, said the Nebraska job isn't harder than he thought it would be.

"I knew a lot of the challenges coming in here," he said. "I've been watching Nebraska for a long time and it was a long way away from what it needed to be and where it should have been. Those changes can't happen overnight."

Frost pointed out Nebraska had won seven of 10 games before the Ohio State game.

"Good things are coming," he said. "You're never satisfied with where they are. You always want it to go faster, but I don't think anyone in our building doubts that things are coming and it's going to make it even sweeter when you get there when you go through these things."

Nebraska and Northwestern both are looking to establish offensive consistency.

The Huskers thought they found it in the second half against Illinois on Sept. 21, but Ohio State's defensive starters held them under 100 total yards until late in the third quarter. Adrian Martinez completed just 8 of 17 passes for 47 yards, with three interceptions, and was sacked four times.

Frost said Martinez doesn't deserve the blame because he has had to deal with "a bunch of uncertainties."

"We're putting an awful lot on him anyway," Frost said, "but when he is worried about where the snap is, worried about who is coming unblocked, worried about if his receiver is going to be in the right place... That's too much to put on a quarterback."

Northwestern ranks 126th in the Football Bowl Subdivision in total offense (292.8 ypg) and pass completion rate (46.9 percent) and is tied for last with seven touchdowns. The Wildcats had 255 yards and averaged 3.1 yards per play in a 24-15 loss to Wisconsin.

"We have some guys who are very confident on offense, and I also think they're pretty (mad), to be honest with you," Wildcats coach Pat Fitzgerald said. "They take it to heart. They take pride in how we prepare. And they're holding teammates accountable to bring them along. The excuse of being young is over. You're a month into the season. There needs to be a higher level of consistency and execution, and then confidence comes."

The teams have split eight meetings since the Huskers joined the Big Ten in 2011, with Northwestern winning three of four in Lincoln. Six games have been decided by one score.

Turnovers have played a major role in the series, especially the last two years. In 2017, Northwestern intercepted a pass at its 16 and drove 84 yards for the tying touchdown before winning 31-24 in overtime. In Northwestern's 34-31 overtime win last year, the Huskers converted two turnovers into 10 points and the Wildcats set up their winning field goal with an interception of Martinez.

Nebraska is minus-4 in turnovers this season, Northwestern is minus-3.

"I don't want to speak for Frosty," Fitzgerald said, "but both of us are turning it over at a rate that's a reason why we're having inconsistency on offense."

Both teams will be missing key players. The Big Ten suspended Nebraska defensive end Khalil Davis for the game for striking an Ohio State player in violation of the conference's sportsmanship policy. Northwestern will be without leading receiver Bennett Skowronek for at least a month. Skowronek, who didn't play against Wisconsin, had surgery for an undisclosed injury this week.

Northwestern, trying to avoid its first three-game conference losing streak since 2014, is in its toughest stretch of the season. Back-to-back road games against No. 8 Wisconsin and Nebraska are followed by home games against No. 4 Ohio State and No. 12 Iowa.

Nebraska last week showed some of the offense Frost played in when he was the quarterback in the mid-1990s, having Dedrick Mills line up at fullback in the I formation. Fitzgerald called it "cool stuff" and said his defense is preparing to see more of it. Frost said, "We'll pick our spots."